It is 2:11 PM Tuesday afternoon here in West Michigan. It is a warm sunny day. We still have the central air system on because we like the house not to feel humid. I am falling asleep as I attempt to write a summary thus far of this day.

Carol has gone to bed because she has to work the next two nights. She has been off two weeks. Some of those days she was off was because she was very sick with a bad cold.

Andy, Beth and the grandchildren left this morning around 10 o'clock AM to drive up northern Michigan to hook up with Andy's side of the family. Beth and her family will be back here this coming Friday afternoon.

After everyone had left Carol and I picked up the house and I left to do errands. While out doing errands I visited thrift stores to look at their used books. I found these used books today at Goodwill thrift store-

'1984' A Novel by George Orwell (We already had this novel by Orwell, but I bought this edition because of it's cover.)

'Songs for the Missing' A Novel by Stewart O'Nan

When I got home from running around I ate lunch and wrote in my paper diary. I have had no time today to read any of my books. I did read yesterday evening some more of the book, 'Biblical Theology of the New Testament' by Peter Stuhlmacher translated and edited by Daniel P. Bailey.

Last night after Andy, Beth and the grandchildren went to bed (They went to bed early). Carol and I watched taped shows and then we went to bed.

Well I will close to sit in silence. I am sleepy since I have not been sleeping soundly lately. I am not use to sleeping on our old bed down in the lower level. Tonight I am back to sleeping in our newest bed so maybe I will sleep better.

This morning Lou and Marn wanted me to take a picture of them with their make believe zoo. 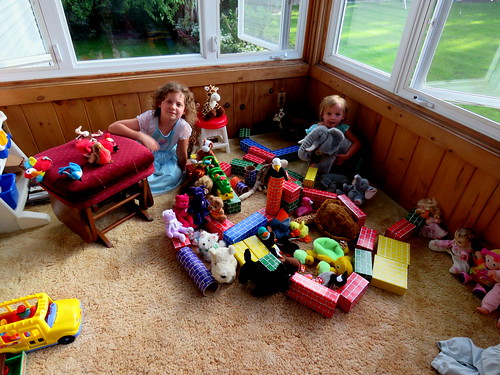 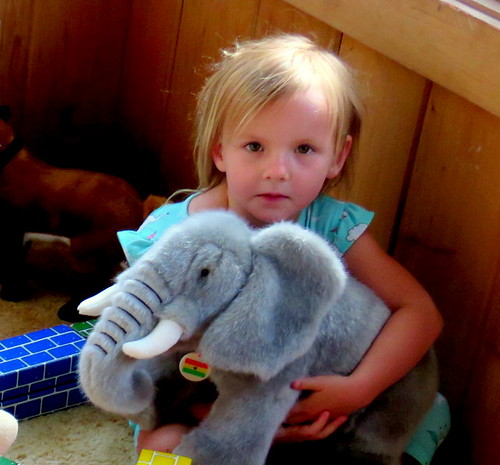 'The Shaman: Voyages Of The Soul, Trance, Ecstasy, And Healing From Siberia To The Amazon' by Piers Vitebsky

'Lincoln's Emancipation Proclamation: The End Of Slavery In America' by Allen C. Guelzo

'Standard Dictionary Of Folklore, Mythology, And Legend' Unabridged Edition Of The Original Work

'1984' A Novel by George Orwell (We already had this novel by Orwell, but I bought this edition because of it's cover.)

'Songs for the Missing' A Novel by Stewart O'Nan

'Biblical Theology of the New Testament' by Peter Stuhlmacher

'Suitable Improvement of Saints' Former Experiences' Rev. Thomas Boston a Sermon Text "And he took the mantle of Elijah that fell from him, and smote the waters, and said, Where is the LORD of Elijah" 2 Kings 2:14

'The Art of Prayer: An Orthodox Anthology" compiled by Igumen Chariton of Valamo translated by E. Kadloubovsky and E. M. Palmer edited with an introduction by Timothy Ware

"But without faith it is impossible to please Him, for he who comes to God must believe that He is, and that He is a rewarder of those who diligently seek Him" Hebrews 11:6

"Oh, taste and see the LORD is good; Blessed is the man who trusts in Him! Oh, fear the LORD, you His saints! There is no want to those who fear Him. The young lions lack and suffer hunger; Bu those who seek the LORD shall not lack any good thing" Ps. 34:8-10
Collapse