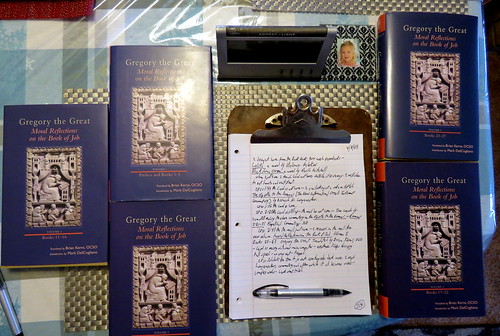 It is in the death flow 4:06 PM Monday afternoon. It is a cold sunny day here in West Michigan.

I am falling asleep as I write so I better make it fast. I have had thus far a normal day. Nothing strange has occurred, so all is well. I got up this morning around 6:15 AM. When I got up I found my wife reading her Bible in the living room. I made oatmeal for breakfast and also made a fresh pot of coffee. It is a blessing to have hot oatmeal for breakfast. I am absolutely blown away by God's blessing and mercies showered on us here in America. We are richly bless as a nation. We need to repent before the ax falls.

After breakfast I wrote in my paper diary and read from a book titled, 'The Saving Righteousness of God: Studies on Paul, Justification, and the New Perspective' by Michael Bird. I also read this morning from a novel I read last night titled, 'An Arsonist's Guide To Writer's Homes In New England' a novel by Brock Clarke.

I volunteered at the local library used books store this morning from 10 o'clock AM till 1 o'clock PM. No one came in the store except Carol and a some older woman. I read and wandered the store till my replacement came at 12:55 PM. I read at the Book Nook from a Crime Fiction novel titled, 'The New Iberia Blues' A Dave Robicheaux Novel by James Lee Burke. I also read while at the Book Nook,'The Saving Righteousness of God: Studies on Paul, Justification, and the New Perspective' by Michael Bird.

In the mail today I received Volume 5 of 'Moral Reflections on the Book of Job' Books 23-27 by Gregory the Great Translated by Brian Kerns, OCSO.

This afternoon I have been reading my massive commentary on The Epistle to the Romans by Richard N. Longenecker.

Carol works tonight, so right now she is sleeping. I should be sleeping since I feel so exhausted this afternoon.

Last night I read some more of the novel, 'The Lazarus Project' by Aleksandar Hemon. I need to close right now because my eyes wont't stay open any longer.

'The Message of The Old Testament: Promise Made' by Mark Dever

'With Our Backs To The Wall: Victory And Defeat In 1918' by David Stevenson

'What Was Mine" Stories by Ann Beattie

'The Return of Eva Peron With The Killings In Trinidad' essays by V.S. Naipaul