It is in the death flow 12:06 PM Tuesday afternoon. It is a cold sunny afternoon here in West Michigan.

Emily dropped off Cora this morning, because she was too sick with a cold to be at the Day Care Center. Plus the Day Care Center does permit parents to drop off their kids if they are sick with a bad cold. Yesterday Cora had a fever and the Day Care called Emily and said she had to pick up Cora and take her home. So Carol and I have been baby-sitting little baby Cora today.

'Righteous by Promise: A biblical theology of circumcision' by Karl Deenick [New Studies In Biblical Theology]

'The Saving Righteousness of God: Studies on Paul, Justification, and the New Perspective' by Michael Bird

Not much else to report this afternoon. Carol and I are still sick with a bad cold. Last night I read and went to bed around 11 o'clock PM. I mainly read last night from a book titled,'Righteous by Promise: A biblical theology of circumcision' by Karl Deenick [New Studies In Biblical Theology].

Carol goes back to work tonight, so she has to sleep this afternoon. Caleb is suppose to come and get Cora around 2 o'clock PM. Well I will close to feel sick with a cold. 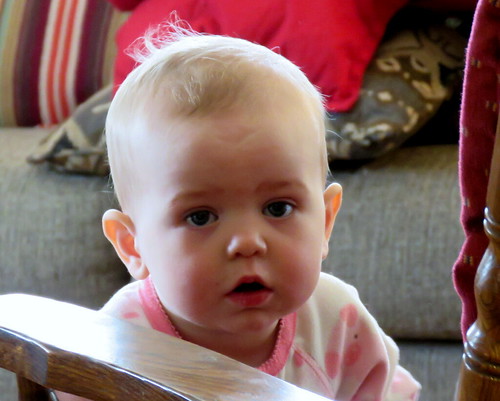 What is it about The Gospel Coalition that I don’t like? For starters, I’m not a fan of coalitions that use the language of the Gospel to modify them; it makes it seem as if they have the corner on the Gospel, and anyone who might disagree with their presentation is probably not an orthodox Christian. I don’t like the notion of “coalition” because it starts to function like a monopolizing corporation wherein all other comers, if they want to be part of the movement, need to sign onto the mission and confession statement to be included. Indeed, this is the effect it is producing among the many evangelical churches out there. TGC, because of its breadth have church resources, and packages for various programs for local churches to easily implement into the body life of their respective churches. But what has come along with that is the attending theology that funds TGC. Now, this might not pose a problem for many pastors and ministries out there, but I think it has indeed had a homogenizing effect; such that many churches and pastors who weren’t necessarily Calvinistic previously, have now become so. In fact, I personally know of more than one pastor out there where this is the case. Indeed, I think this was the desired hope to begin with; i.e. to introduce Calvinist theology into churches wheretofore this sort of theology was not necessarily on tap at the various evangelical churches. It has had an amazing impact over at least the last decade; the growth has been exponential, and people who never would have been open to Calvinist theology previously (say like at churches like Calvary Chapels) are now full-fledged Calvinists (or they’re at least on the way).

Clearly, not all evangelical churches have given into the machine known as The Gospel Coalition; I mean there are a variety of self-conscious Arminian and other sorts of churches out there. But this is the problem, at least for me personally. Movements like TGC have largely co-opted the conservative evangelical movement. In other words, if you want to be intentionally doctrinally oriented in your church, and you’re looking for resources in that direction, the only place really going is TGC (and like conference oriented movements). On the other hand, we have many evangelical churches, clearly, which are still stuck in the 80s and 90s focusing on church growth, being relevant, meeting felt needs types of churches. But this is the dilemma for us evangelicals out here who don’t want either of these alternatives. This obviously is not TGC fault, per se, but their ‘coalition’ model has helped contribute to this sort of polarity in the evangelical world. Of course, they think they are offering a really good product to the churches; they believe they do indeed have a corner on what the orthodox and Protestant Gospel actually entails; they think the 16th and 17th centuries of the Protestant Post Reformation Reformed orthodox developments offer the best footing forward for the evangelical churches. But I don’t agree!

The Gospel Coalition’s annual conference is currently underway. I thought, once again, I would repost a post that gets into some material critique of the sort of Federal Calvinism that funds TGC’s theology. It disheartens me that TGC, and other like movements in conservative evangelicalism, is having the sort of impact and reach it is. In this post I identify, through Bell’s work, a distinction even in and among the Federal theologians as that theology was being developed in Scotland and elsewhere. Here’s that post:

Evangelical Calvinism is really a bubbling over of a variety of impetuses from within the history of Reformed theology. We look to the Scottish theology of Thomas Torrance, and the antecedent theology he looks to in the theology of John Calvin and also in the Scottish Kirk from yesteryear. We of course also look to the Swiss theology of Karl Barth towards offering a way forward in constructive ways in regard to where some of the historical antecedents trail off (primarily because they didn’t have the necessary formal and material theological resources available to them to finally make the turn that needed to be made in regard to a doctrine of election and other things).