'The Mathematics Of The Breath And The Way: On Writers And Writing' by Charles Bukowski Edited With An Introduction By David Stephen Calonne

'Beerspit Night And Cursing: The Correspondence Of Charles Bukowski And Sheri Martinelli 1960-1967' Edited By Steven Moore

'Bukowski-Born Into This' A film by John Dullaghan DVD

'The Invention of Science: A New History of the Scientific Revolution' by David Wootton

'How to Change Your Mind: What the New Science of Psychedelics Teaches Us About Consciousness, Dying, Addiction, Depression, and Transcendence' by Michael Pollan 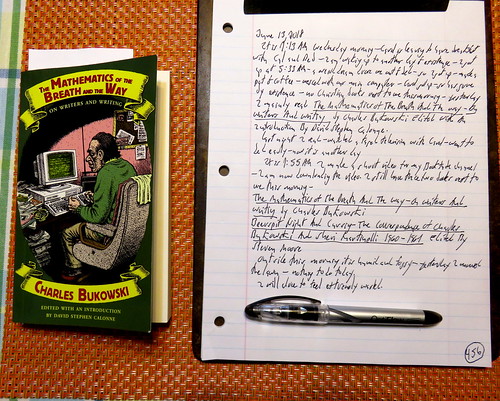 It is 1:23 PM Wednesday afternoon in the ongoing death flow/the rate of decomposition. A warm breezy afternoon here in West Michigan. A good day go go down with the ship.

I got up this morning around 5:33 AM. I got up because I was having a nightmarish dream. So I got up open up the house to let in the morning air. I made a pot of fresh coffee and then messed with our main computer. Carol soon got up to face the day. This morning she met family members downtown for breakfast.

I spent the morning writing in my paper diary, reading books, and doing the wash. We wanted to get the wash on the clothesline for the warm sunshine to dry our wash.

'The Mathematics Of The Breath And The Way: On Writers And Writing' by Charles Bukowski

'Beerspit Night And Cursing: The Correspondence Of Charles Bukowski And Sheri Martinelli 1960-1967' Edited By Steven Moore

So this day goes by. Carol works tonight and then off for a couple of nights.

Last night I am too tired to explore or recall right now. I basically read Bukowski and went to bed early.

This morning I took some photos of wild flowers growing in our wild flower garden. Yesterday I mowed our lawn and trimmed bushes. Well this is going nowhere so I will close to face the speeding car ready to smash into me. 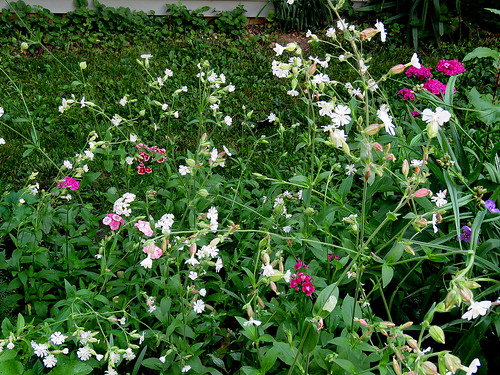 The 25 Questions:
1. Do you have any pets?
2. Name 3 things that are physically close to you.
3. What's the weather like right now?
4. Do you drive? If so have you crashed?
5. What time did you wake up this morning?
6. When was the last time you showered?
7. What was the last movie you saw?
8. What does your last text message say?
9. What's your ringtone?
10. Have you ever been to a different country?
11. Do you like sushi?
12. Where do you buy your groceries?
13. Have you ever taken medication to help you fall asleep faster?
14. How many siblings do you have?
15. Do you have a desktop computer or a laptop?
16. How old will you be turning on your next birthday?
17. Do you wear contacts or glasses?
18. Do you color your hair?
19. Tell me something you are planning to do today.
20. When was the last time you cried?
21. What is your perfect pizza topping?
22. Which do you prefer-hamburgers or cheeseburgers?
23. Have you ever had an all-nighter?
24. What is your eye color?
25. Can you taste the difference between Pepsi and Coke?

'Pinball' a novel by Jerzy Kosinski

'The Life and Death of Mary Wollstonecraft' biography by Claire Tomalin

'The Karaoke Singer's Guide to Self-Defense' a novel by Tim Kinsella
https://www.youtube.com/watch?v=gm77XfDoR3w

'Why I Am A Catholic' memoir by Garry Wills

'Tales of the East and West' by Joseph Conrad

'The Gap Of Time' a novel by Jeanette Winterson

'The Girl Next Door' a novel by Ruth Rendell

'The Magician's Wife' a novel by Brian Moore

'The Life and Opinions of Maf the Dog, and of His Friend Marilyn Monroe' fiction by Andrew O'Hagan

'The Faith: A History of Christianity' by Brian Moynahan

'Colossus: Hoover Dam and the Making of the American Century' by Michael Hiltzik

'The Ordinary Acrobat: A Journey into the Wondrous World of the Circus, Past and Present' by Duncan Well