It is in the death flow 2:27 PM Monday afternoon here in West Michigan. It is a humid rainy gray cloud day. This morning we had thunder claps and hard rain showers. Now it is humid and windy outside. I should try to take photos of tulips this week before they wind blows away all the tulip petals.

I got up this morning around 6:34 AM. I was awake most of the night so I am right now feeling extremely tired. Carol got up soon after I did this morning. I made oatmeal for breakfast and a fresh pot of coffee. It seems my life is one long rerun, but that is bliss/the state of bliss. I ate my oatmeal messing with our main computer. After messing with our main computer I wrote in my paper diary and than sat in the living room with my eyes closed.

On Mondays I volunteer at our local library used books store The Book Nook from 10 o'clock AM till 1 o'clock PM. Today the store was quiet so I wandered the store to keep myself awake and read when possible from a book titled, 'Nicaea and its Legacy: An Approach to Fourth-Century Trinitarian Theology' by Lewis Ayres. I brought home one used book from the Book Nook titled, 'FLO A Biography of Frederick Law Olmsted' by Laura Wood Roper.

I got home from the Book Nook around 1:05 PM I ate some food and wrote in my paper diary. Carol came home from doing errands and has gone to bed to sleep before going to work tonight. Existence keeps speeding by!

I will close since I am falling asleep. I will make myself a fresh pot of coffee and sit and wait it out. I am not going anywhere. This is it. 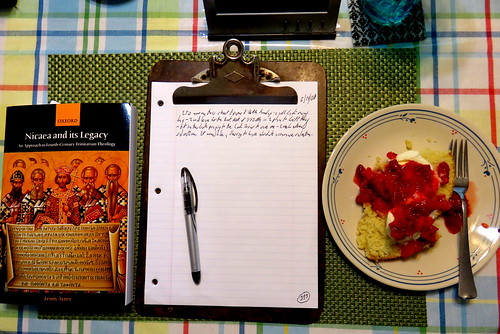 'Nicaea and its Legacy: An Approach to Fourth-Century Trinitarian Theology' by Lewis Ayres

'Many Mansions: An Introduction To The Development And Diversity Of Medieval Theology' by David N. Bell

'No Immediate Danger' Volume One Of Carbon Ideologies by William T. Vollmann

'Twilight' a novel by William Gay

'When Paris Went Dark: The City Of Light Under German Occupation, 1940-1944' by Ronald C. Rosbottom

'Rasputin: Faith, Power, And The Twilight Of The Romanovs' by Douglas Smith

'The Geographer's Library' a novel by Jon Fasman

'As It Happened' A Memoir by William S. Paley

'Just Business: Christian Ethics for the Marketplace' by Alexander Hill

'Everything' a novel by Kevin Cantry