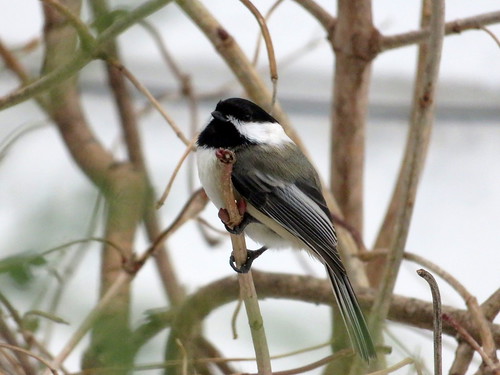 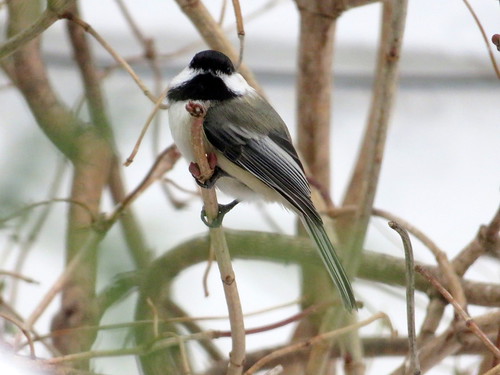 It is 11:36 AM Saturday morning here in West Michigan. It is a snowy day. Today the snow has turned into thick icy slush. Ugly driving weather for us folks who have to be on the road. I am not sure if I want to leave the house this morning to visit local thrift stores. If I do not do it today visiting thrift stores I might not be able to till sometime in the future. Our futures are totally wrapped in darkness. Existence keeps zooming by! Our futures are quickly sinking into the unknown blackness of the eternal void.

Carol left this morning to visit an elderly friend in a Rest Home. I have been basically writing in my paper diary and reading from a book titled, 'Sanctification' by Michael Allen [New Studies In Dogmatics].

There is not much else to report this morning. We will soon be into the Noontime hours. I will close to wait it out.

"[1] Then shall the kingdom of heaven be likened unto ten virgins, which took their lamps, and went forth to meet the bridegroom.
[2] And five of them were wise, and five were foolish.
[3] They that were foolish took their lamps, and took no oil with them:
[4] But the wise took oil in their vessels with their lamps.
[5] While the bridegroom tarried, they all slumbered and slept.
[6] And at midnight there was a cry made, Behold, the bridegroom cometh; go ye out to meet him.
[7] Then all those virgins arose, and trimmed their lamps.
[8] And the foolish said unto the wise, Give us of your oil; for our lamps are gone out.
[9] But the wise answered, saying, Not so; lest there be not enough for us and you: but go ye rather to them that sell, and buy for yourselves.
[10] And while they went to buy, the bridegroom came; and they that were ready went in with him to the marriage: and the door was shut.
[11] Afterward came also the other virgins, saying, Lord, Lord, open to us.
[12] But he answered and said, Verily I say unto you, I know you not.
[13] Watch therefore, for ye know neither the day nor the hour wherein the Son of man cometh." Matthew 25:1-13

It is now in the death flow 3:04 PM Saturday afternoon here in Western Michigan. It is a cold winter day. It is not snowing right now, but it is suppose to this evening.

This morning I did leave our home to pick up a prescription and to visit two local thrift stores to search for used books to ADD to our library. I found these books today-

'Seeking The Cure: A History Of Medicine In America' by Ira Rutkow

'In Our Time: A Memoir Of A Revolution' a memoir by Susan Brownmiller

'Capital Dames: The Civil War and the Women of Washington 1848-1868' by Cokie Roberts

'Betsy Ross And The Making Of America' by Marla R. Miller

'King Leopold's Ghost: A Story of Greed, Terror and Heroism in Colonial Africa' by Adam Hochschild

After going to Family Fare to get a prescription refilled and visiting two local thrift stores I came home to wait out the winter storm. Not much else to report this afternoon. There is no way out.

"[1] Let us therefore fear, lest, a promise being left us of entering into his rest, any of you should seem to come short of it.
[2] For unto us was the gospel preached, as well as unto them: but the word preached did not profit them, not being mixed with faith in them that heard it.
[3] For we which have believed do enter into rest, as he said, As I have sworn in my wrath, if they shall enter into my rest: although the works were finished from the foundation of the world.
[4] For he spake in a certain place of the seventh day on this wise, And God did rest the seventh day from all his works.
[5] And in this place again, If they shall enter into my rest.
[6] Seeing therefore it remaineth that some must enter therein, and they to whom it was first preached entered not in because of unbelief" Hebrews 4:1-6

It is in the death flow 7:24 PM Saturday night. I am once again reading from a book titled, 'Spain In Our Hearts: Americans In The Spanish Civil War, 1936-1939' by Adam Hochschild. Earlier I made quick video for my Booktube channel showing folks our Tony Hillerman collection.

There is not much else to report. Carol works till 10 o'clock PM tonight and when she gets out she will call me to come and bring her home. Tomorrow starts a new week in the last month of the Year 2017. Let's pray and hope our current President does not get us into a world war in the Year 2018.

'The Tony Hillerman Companion: A Comprehensive Guide To His Life And Work' Edited by Martin Greenberg

Tony Hillerman died in 2008 at the age of 83 years old.
https://en.wikipedia.org/wiki/Tony_Hillerman

'The Spell Of New Mexico' Edited by Tony Hillerman

'The Best of the West: An Anthology of Classic Writing from the American West' Edited by Tony Hillerman

'Tony Hillerman's Landscape: On The Road With Chee And Leaphorn' by Anne Hillerman Photographs By Don Strel

The TMI Tag Questions (TMI means "too much information")

1: What are you wearing? a wool shirt and a pair of sweat pant/wool socks

3: Ever had a terrible breakup? Yes

8: OTP? do not know what that means

9: Favorite show? I stopped watching television but I do tape LOUDERMILK

10: Favorite bands? too many to name but I will name two Bufflo Tom & Afghan Whigs

11: Something you miss? energy

15: Quality you look for in a partner? kindness

16: Favorite Quote? "I have been crucified with Christ; it is no longer I who live, but Christ lives in me; and the life which I now live in the flesh I live by faith in the Son of God, who loved me and gave Himself for me" Galatians 2:20 New Testament Bible

20: Where do you go when you’re sad? inside myself

21: How long does it take you to shower? five minutes

22: How long does it take you to get ready in the morning? three minutes

23: Ever been in a physical fight? no

28: Last thing that made you cry? I cry all the time

29: Last time you said you loved someone? this morning

30: Meaning behind your YouTube Name? it is my name

32: The book you’re currently reading? 'The Lonely City: Adventures In The Art Of Being Alone' by Olivia Laing

34: Last person you talked to? my wife

35: The relationship between you and the person you last texted? I do not text

37: Place you want to visit? Heaven

38: Last place you were? grocery store

40: Last time you kissed someone? this morning

41: Last time you were insulted? can't remember when I was last insulted

42: Favorite flavor of sweet? no answer

43: What instruments do you play? none

44: Favorite piece of jewelry? none

45: Last sport you played? none

47: Favorite chat up line? I do not chat online

48: Have you ever used it? do not understand this question

49: Last time you hung out with anyone? I rarely if ever talk to someone on a phone

50: Who should answer these questions next? nobody
Collapse