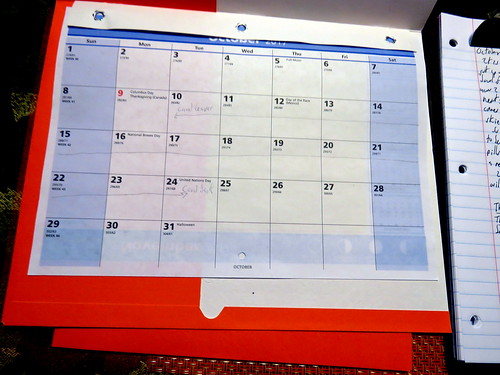 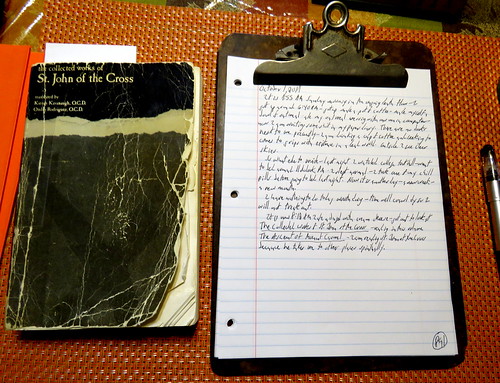 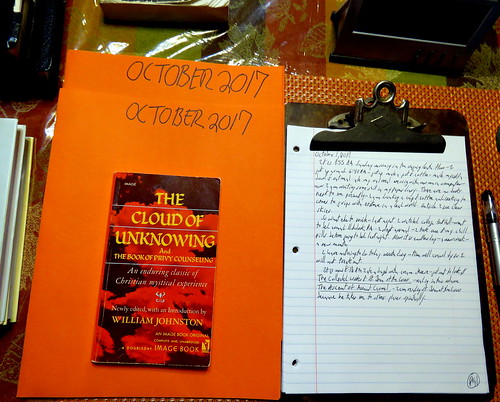 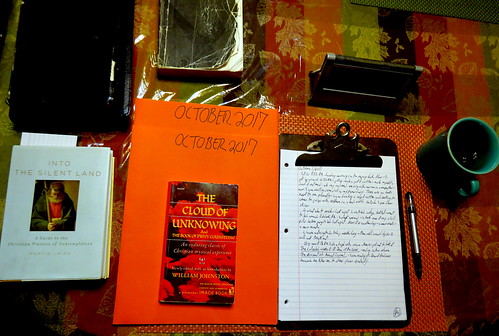 It is 12:47 PM Sunday afternoon. A cold cloudy day here by Lake Michigan. A good day to rake leaves.

I got up this morning around 6:20 AM. I got up made myself a pot of coffee and a pot of oatmeal. I ate my mush messing with our main computer. After eating my mush I wrote in my paper diary. Carol came home from work as I was down loading photos I took this morning of my October 2017 Diary into my online diaries. It is a new week and a new month to prepare for death.

Carol went to bed around 9:20 AM and after she went to bed I cleaned the kitchen and look through the The New York Times Sunday October 1, 2017 edition. Carol went downtown to Reader's World after work and got more Sunday morning newspapers. She takes the New York Times Sunday edition to her friend Pam who is 93 years old and lives in a Nursing Home. I just read the Book Reviews and look through Arts & Leisure section. I also read an interesting profile of John McPhee in the The New York Times Magazine this morning. This profile on the writer John McPhee prompted me to dig out our books by the writer John McPhee and to make sure I had them cataloged in my LibraryThing site. Here is a list of the books we have by John McPhee-

'The John McPhee Reader' Edited With An Introduction by William L. Howarth

'Looking for a Ship' seafaring life by John McPhee

'Pieces of the Frame' essays by John McPhee

'Oranges' a history of oranges by John McPhee

'The Control Of Nature' essays by John McPhee

I wish I had all McPhee's writings in our library.

So the morning has disappeared and we are now in the Noontime hours. I have nothing to do but feel the aches and pains of old age. Where have the years gone?

'Mary Queen of Scots' a biography by Antonia Fraser
https://www.librarything.com/catalog/bookmountain&collection=-1&deepsearch=Antonia+Fraser

'The Eyes of the Heart: A Memoir of the lost and found' by Frederick Buechner

'What I Did Wrong' a novel by John Weir
https://johnpweirjrblog.wordpress.com/2014/10/04/american-graffiti/

'A Room With A View', 'Howards End' & 'Maurice' three novels in One Volume by E. M. Forster

'Great Books: My Adventures With Homer, Rousseau, Woolf, And Other Indestructible Writers of The Western World' by David Denby
Collapse