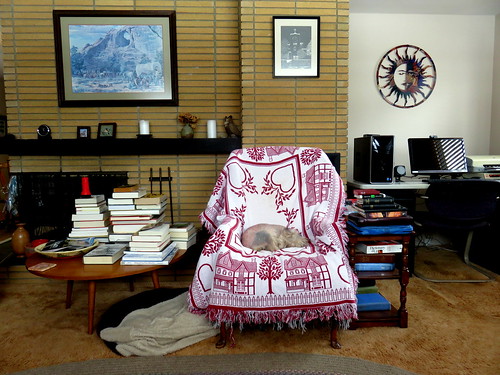 It is 11:29 AM late Monday morning in the death flow. Outside this morning the sun is shining.

I got up this morning around 6:35 AM. When I got up all was as it was when I went to bed last night. It is a blessing to know God does not change. I made oatmeal for breakfast and after breakfast my wife and I went grocery shopping. So has gone by the morning thus far.

After putting away the groceries I wrote in my paper diary and read from a book titled, "Sinai And The Saints: Reading Old Covenant Laws For The New Covenant Community" by James M. Todd III.

Carol and I are still sick from a cold and a mild sore throat. Carol called in sick this morning, so she will not be working tonight. My wife rarely if ever calls in sick. She has lost her voice so she could not talk if she was to go to work which demands her being able to use her voice. I had to call our Tax Man this morning for Carol since she can not talk over the phone to be understood. It is time once again to get our taxes done.

Yesterday I mainly read my books and felt sick. Well there is not much else to report so I will close.

"Nature's God: The Heretical Origins of the American Republic" by Matthew Stewart

I also made a short video yesterday for my BookTube channel.

I will close to face what comes next.

"Nature's God: The Heretical Origins of the American Republic" by Matthew Stewart

"The Last Adam: A Theology Of The Obedient Life Of Jesus In The Gospels" by Brandon D. Crowe

"John Aubrey, My Own Life" biography by Ruth Scurr

"Hillbilly Elegy: A Memoir of a Family and Culture in Crisis" by J. D. Vance

"President Reagan: The Role Of A Lifetime" biography by Lou Cannon

"Furthermore, when I came to Troas to preach Christ's gospel, and a door was opened to me by the Lord" 2 Corinth. 2:12

It is in the process of decay 3:03 PM Monday afternoon. Existence keeps rotting full speed. I received in the mail this afternoon a used book I had ordered titled, "American Nomad" part memoir and part road movie by Steve Erickson. I found this description online of this book-

"Fired from his job covering the 1996 presidential campaign for Rolling Stone, novelist Erickson (Amnesiascope, 1996, etc.) decides to stay on the candidates' trail and comes to some sobering conclusions about our country and its political legacy. Erickson attacks left, right, and center with equal abandon. Part rant and part serious analysis, often hysterically funny, American Nomad argues in a variety of ways that we have, in routinely choosing style over substance in our politicians, sold our Jeffersonian birthright for a mess of pottage. Take, for instance, his ``Sane Man/Crazy Man'' theory of electoral politics, wherein the most sane candidate wins the primaries, only to be defeated by the crazier candidate in the general election. This can get tricky, Erickson concedes, as in 1960 when the presidential race involved ``two undisputed psychotics.'' Erickson applies the same scrutiny to himself and to a palpably neurotic Jann Wenner, to whose caprices Erickson is subject until he is finally sacked. Deciding to stay on the campaign trail, Erickson becomes an American nomad, but this moniker carries a heavier connotation. It also represents those who are ``possessed by their country's dangerous fever and estranged from their country by that fever.'' Fellow travelers, in this sense, would include (according to Erickson) Whitman, Elvis, Nixon, and Philip K. Dick. A peculiar but ultimately rewarding digression on Nixon has Erickson playing with the reality of the last 17 years, suggesting an alternate universe where Carter has won reelection in 1980, and a slew of successors, including Ed Koch, have brought the country to even greater ruin. If American Nomad ranges widely (and wildly), plenty of actual election coverage, from the New Hampshire primary through the general election, is also mixed in. Erickson's saga operates brilliantly as both a political chronicle and a zany memoir. (Author tour)"

"Part memoir and part road movie, racked by pop dreams and apocalyptic reveries, American Nomad is a journey across the face of the national zeitgeist, all the way to the last election of the Millennium. For Steve Erickson, the acclaimed author of such visionary novels as Days Between Stations, Arc d'X and Amnesiascope, what began as an assignment from an increasingly perplexed Rolling Stone magazine to cover the 1996 presidential campaign soon became much stranger and more audacious mission: to chart the lengthening lines of fracture in American landscape where memory has become disengaged from history-"a state of entropy," writes Erickson, "where not only the political and moral gravity has imploded, but a gravity of spirit." Amid the smoke of a bombed-out federal building in Oklahoma City, beneath the falling shadow of a TWA airliner, "the American originally conceived as a floating crapgame of benign Jeffersonian anti-country giving way to Timothy McVeigh's. . . America has become a country of nomads, who wander the hallways of the American soul not sure of they're in a funhouse or a cancer ward."

When he is abruptly fired by Rolling Stone, Erickson suddenly finds himself a "correspondent without portfolio." With a bogus press badge and bogus business cards, armed with moonshine credentials and a surreptitious itinerary of his own making, he decides to keep on driving into America and the last years of the Twentieth Century "on one last rampage through the national asylum, just to make one last observation, one last comment, or even to tell one last lie. . ." From state to state, from primary to convention, from historic icebound New Hampshire to the psychic desert cul-de-sac of Los Angeles, from the techno-pyramids of Las Vegas to the ancient Indian pyramids of a lost America called Cahokia, buried in the Midwest, among the fellow wanders and exiles that include Bill Clinton and Bob Dole, Colin Powell and Pat Buchanan, Richard Nixon and Mike Hammer, Frank Sinatra and Scott Fitzgerald, Oliver Stone and Philip K. Dick, Bruce Springsteen and Faulkner's Joe Christmas, Erickson roams the highways of a republic in revolt against itself and in search of its own meaning, until he meets, in a car wreck on a highway outside of Chicago, the most nomadic American of all."
Collapse