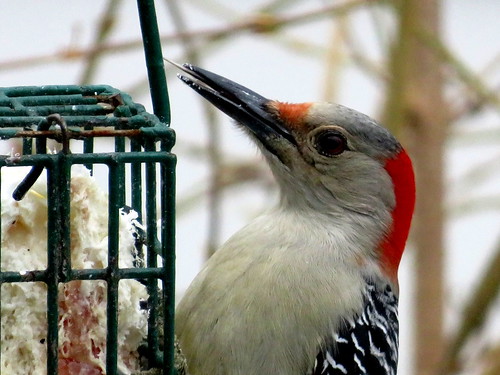 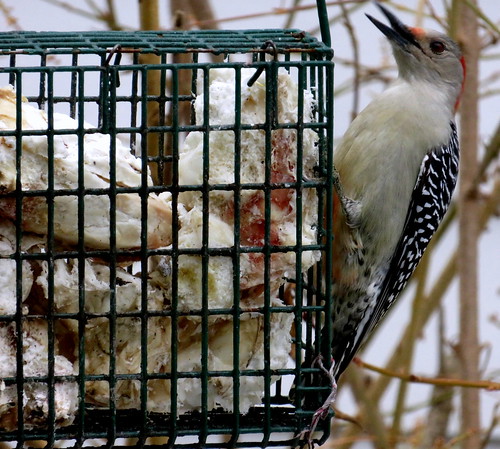 It is 9:36 AM Monday morning in the death flow. It is a cold snowy day here in West Michigan.

I got up this morning around 6:30 AM. When I got up I found my wife on our main computer checking out her Facebook site. I got a glass of cold water and sat in the living room seeking to wake up to another day. After gathering my wits I went to the kitchen and poured out cereal into a bowl for breakfast. After breakfast I wrote in my paper diary and then sat in an easy chair and dozed till Carol left to have breakfast with a friend. I woke myself up fed the birds after eating a piece of birthday cake. Now I am writing in my online diaries. Existence keeps zooming by!

This morning I read a little of the book, "Deep South:Four Seasons On Back Roads" a travel memoir by Paul Theroux.

Last night my wife and I watched television till 10:30 PM. We then went to bed.

I have no plans for the day ahead of me. The roads are covered in snow so I won't be traveling any where today. My wife goes back to work after being off seven days.

I suppose I will close to feel wasted. These cold winter days make me feel drained of all energy.

"The Pillars Of Hercules: A Grand Tour of the Mediterranean" by Paul Theroux

"The Family Arsenal" a novel by Paul Theroux

"O-zone" a novel by Paul Theroux

"My Other Life" a novel by Paul Theroux

"My Secret History" a novel by Paul Theroux

"Millroy The Magician" a novel by Paul Theroux

"Riding The Iron Rooster By Train Through China" by Paul Theroux

"The Happy Isles Of Oceania Padding The Pacific" by Paul Theroux

"Ghost Train Of The Eastern Star: On The Tracks Of The Great Railway Bazaar" by Paul Theroux

"The Kingdom By The Sea: A Journey Around Great Britain" by Paul Theroux

"The Elephanta Suite" a novel by Paul Theroux

"The Consul's File" a novel by Paul Theroux

"Murder In Mount Holly" a crime novel by Paul Theroux

"The Lower River" a novel by Paul Theroux

"A Dead Hand" A Crime In Calcutta by Paul Theroux

"Deep South: Four Seasons On Back Roads" a travel memoir by Paul Theroux

My wife once asked me why I collect travel books when I do not like traveling. I replied that I like to read travel books so as to dream of those far away places. What I look forward is traveling in the New Creation/the world to come/Heaven on the new earth. "He who testifies to these things says, "Surely I am coming quickly."" Rev. 22:20.

It is in the Death Flow 8:11 PM Monday night inside my grave. It is cold and dark down here in my grave. All is dark and crammed. I need some open space and light down here in the ice pit. All I can do is pray for grace to suffer the pangs of death.

Carol left for work around 7:55 PM tonight. I put a snow shovel in my van in case she has to dig herself out tomorrow morning after work. I am driving her car to my doctor's appointment tomorrow morning. Her car has four wheel drive whereas my old van is on its last legs.

I did leave the house this afternoon so as to get some money from our Credit Union and then I visited two local thrift shops to look for used books to add to our prison library. I found this used books today-

"Moby-Dick" a novel by Herman Melville

"Bulfinch's Greek And Roman Mythology: The Age Of Fable"

"City of Djinns: A Year In Delhi" a travel memoir by William Dalrymple (I have three other books by Dalrymple in our library-"In Xandau: A Quest", "The Last Mughal: The Fall Of A Dynasty: Delhi, 1857", and "White Mughals" Love and betrayal in eighteenth-century India.)

"The Moon Is A Harsh Mistress" Science Fiction by Robert A. Heinlein

"Deep South: Four Seasons On Back Roads" a travel memoir by Paul Theroux

"Life At The Bottom: The Worldview That Makes The Underclass" essays by Theodore Dalrymple

In the mail this afternoon I received three CD's for my music collection. I am suppose to get a new book in the mail I think tomorrow.

So the day went by and now it is nighttime. Existence keeps digging graves. I will close to feel sick to my inner being.

"[7] And he came and took the book out of the right hand of him that sat upon the throne.
[8] And when he had taken the book, the four beasts and four and twenty elders fell down before the Lamb, having every one of them harps, and golden vials full of odours, which are the prayers of saints.
[9] And they sung a new song, saying, Thou art worthy to take the book, and to open the seals thereof: for thou wast slain, and hast redeemed us to God by thy blood out of every kindred, and tongue, and people, and nation;
[10] And hast made us unto our God kings and priests: and we shall reign on the earth.
[11] And I beheld, and I heard the voice of many angels round about the throne and the beasts and the elders: and the number of them was ten thousand times ten thousand, and thousands of thousands;
[12] Saying with a loud voice, Worthy is the Lamb that was slain to receive power, and riches, and wisdom, and strength, and honour, and glory, and blessing.
[13] And every creature which is in heaven, and on the earth, and under the earth, and such as are in the sea, and all that are in them, heard I saying, Blessing, and honour, and glory, and power, be unto him that sitteth upon the throne, and unto the Lamb for ever and ever.
[14] And the four beasts said, Amen. And the four and twenty elders fell down and worshipped him that liveth for ever and ever." Rev. 5:7-14
Collapse