Below is a list of books mentioned in this video-

"The Heart Of Everything That Is: The Untold Story of Red Cloud, An American Legend" by Bob Drury & Tom Clavin

"The Conquest of the Missouri" by Joseph Mills Hanson

"Three Roads To The Alamo: The Lives And Fortunes Of David Crockett, James Bowie, And William Barret Travis" by William C. Davis

"The Ecological Indian: Myth and History" by Shepard Krech III

"Touched By Fire: The Life, Death, And Mythic Afterlife Of George Armstrong Custer" by Louise Barnett

"Son Of The Morning Star: Custer and the Little Bighorn" by Evan S. Connell

"In Alaska and the American West: Wanderings of an Environmental Journalist" by Philip L. Fradkin

"In A Barren Land: American Indian Dispossession And Survival" by Paula Mitchell Marks

"A Wilderness So Immense: The Louisiana Purchase and the Destiny of America" by Jon Kukla

"A Shovel Of Stars: The Making of the American West-1800 to the Present" by Ted Morgan

"Wilderness At Dawn: The Setting Of The North American Continent" by Ted Morgan

"The Men Who Wear The Star: The Story Of The Texas Rangers" by Charles M. Robinson III

"A Sorrow In Our Heart: The Life Of Tecumseh" by Allan W. Eckert

"The First Americans: A Story of North American Archaeology" by C.W. Ceram

"The Frontiers Men: A Narrative" by Allan W. Eckert

"In The Spirit Of Crazy Horse" by Peter Matthiessen

"The Last Wilderness" by Murray Morgan

"The Man Who Walked Through Time" by Colin Fletcher

"A Nation Moving West: Readings in the History of the American Frontier" Edited by Robert W. Richmond & Robert W. Mardock

"Legends of the American Desert: Sojourns In The Greater Southwest" by Alex Shoumatoff

"Trail Of Tears: The Rise And Fall Of The Cherokee Nation" by John Ehle

"Buffalo Bill Cody: The Man Behind The Legend" by Robert A. Carter

"The Myth Of The West: America as the Last Empire" by Jan Willem Schulte Nordholt

"The Old Iron Road: An Epic of Rails, Roads, and the Urge to Go West" by David Haward Bain

"Neither Wolf Nor Dog: On Forgotten Roads With An Indian Elder" memoir by Kent Nerburn

"Across The Great Divide: Robert Stuart and the Discovery of the Oregon Trail" by Laton McCartney

"Exploration & Empire: The Explorer and the Scientist in the Winning of the American West" by William H. Goetzmann 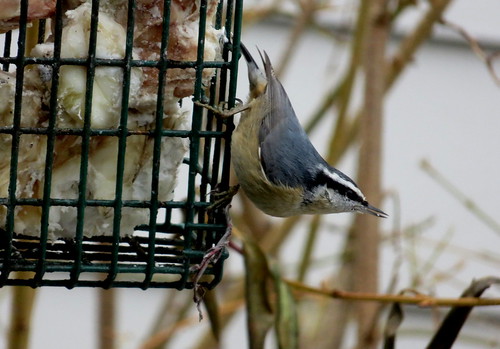 It is in the death flow 11:22 AM Thursday morning here by Lake Michigan. Outside this morning it is cold and gray. Earlier it snowed lightly, but no culmination. I was up this morning around 7:45 AM. I got up made myself some oatmeal for breakfast. I ate my bowl of oatmeal messing with our main computer. I downloaded the video I made last night for my BookTube channel. After messing with our main computer I wrote in my paper diary and read. Carol called me around 8:30 AM to come pick her up, she was done with work once again. When we got home I wrote some more in my diary and Carol and I talked before she went to bed. Carol is off now from work for a couple of days. Work for her has been a killer!

There is not much else to report. Last night I read and made a video and went to bed around 11 o'clock PM. I had a hard time falling asleep so I read from one of my favorite devotions books titled, "Private Devotions" by Lancelot Andrews till I got sleepy. I have been reading this morning from a book titled, "The Refiner's Fire: The Making of Mormon Cosmology,1644-1844" by John L. Brooke. Last night I read from a book titled, "Dear Bunny, Dear Volodya: The Nabokov-Wilson Letters, 1940-1971" Revised and Expanded Edition Edited By Simon Karlinsky.

Did I mention that I received yesterday in the mail this book,"Dear Bunny, Dear Volodya: The Nabokov-Wilson Letters, 1940-1971" Revised and Expanded Edition Edited By Simon Karlinsky and another book titled, "A Really Good Day: How Microdosing Made a Mega Difference in My Mood, Marriage, and My Life" by Ayelet Waldman.

Well it is headed for Noontime here and it is stone quiet. I suppose I will close to read my books and pray for Springtime to arrive soon.

At the Indian Killer's Grave

"Here, also, are the veterans of King Philip's War, who
burned villages and slaughtered young and old, with pious
fierceness, while the godly souls throughout the land were
helping them with prayer." -- Hawthorne

Behind King's Chapel what the earth has kept
Whole from the jerking noose of time extends
Its dark enigma to Jehoshaphat;
Or will King Philip plait
The just man's scalp in the wailing valley! Friends,
Blacker than these black stones the subway bends
About the dirty elm roots and the well
For the unchristened infants in the waste
Of the great garden rotten to its root;
Death, the engraver, puts forward his bone foot
And Grace-with-wings and Time-on-wings compel
All this antique abandon of the disgraced
To face Jehovah's buffets and his ends.


The dusty leaves and frizzled lilacs gear
This garden of the elders with baroque
And prodigal embellishments but smoke,
Settling upon the pilgrims and their grounds,
Espouses and confounds
Their dust with the off-scourings of the town;
The libertarian crown
Of England built their mausoleum. Here
A clutter of Bible and weeping willows guards
The stern Colonial magistrates and wards
Of Charles the Second, and the clouds
Weep on the just and unjust as they will --
For the poor dead cannot see Easter crowds
On Boston Common or the Beacon Hill
Where strangers hold the golden Statehouse dome
For good and always. Where they live is home:
A common with an iron railing: here
Frayed cables wreathe the spreading cenotaph
Of John and Mary Winslow and the laugh
Of Death is hacked in sandstone, in their year.


A green train grinds along its buried tracks
And screeches. When the great mutation racks
The Pilgrim Father's relics, will these plaques
Harness the spare-ribbed persons of the dead
To battle with the dragon? Philip's head
Grins on the platter, fouls in pantomime
The fingers of kept time:
"Surely, this people is but grass,"
He whispers, "this will pass;
But, Sirs, the trollop dances on your skulls
And breaks the hollow noddle like an egg
That thought the world an eggshell. Sirs, the gulls
Scream from the squelching wharf-piles, beg a leg
To crack their crops. The Judgment is at hand;
Only the dead are poorer in this world
Where State and elders thundered race, hurled
Anathemas at nature and the land
That fed the hunter's gashed and green perfection--
Its settled mass concedes no outlets for your puns
And verbal Paradises. Your election,
Hawking above this slime
For souls as single as their skeletons,
Flutters and claws in the dead hand of time."


When you go down this man-hole to the drains,
The doorman barricades you in and out;
You wait upon his pleasure. All about
The pale, sand-colored, treeless chains
Of T-squared buildings strain
To curb the spreading of the braced terrain;
When you go down this hole, perhaps your pains
Will be rewarded well; no rough-cast house
Will bed and board you in King's Chapel. Here
A public servant putters with a knife
And paints the railing red
Forever, as a mouse
Cracks walnuts by the headstones of the dead
Whose chiseled angels peer
At you, as if their art were long as life.


I ponder on the railing at this park:
Who was the man who sowed the dragon's teeth,
That fabulous or fancied patriarch
Who sowed so ill for his descent, beneath
King's Chapel in this underworld and dark?
John, Matthew, Luke and Mark,
Gospel me to the Garden, let me come
Where Mary twists the warlock with her flowers--
Her soul a bridal chamber fresh with flowers
And her whole body an ecstatic womb,
As through the trellis peers the sudden Bridegroom.
Collapse