It is 7:20 AM Saturday morning in the Plan of God for my life in the Wasteland. It is a chilly dark morning. I can smell autumn in the cold morning air. The birds are flocking up and leaves are falling from the trees these days.

I got up at 6 o'clock AM and made a pot of coffee. I messed with our main computer for awhile and then wrote in my paper diary. I was looking at the pile of used books I bought yesterday at the annual AAUW Used Books Sale and wanted to know what the used book titled "Hayduke Lives!" a novel by Edward Abbey was about. I collect the writings of Edward Abbey but have not read much of his writings. I have known the name Edward Abbey since my High School days (1968-1970 Richmond. Calif. John F. Kennedy High), because of his views on environmentalism. When I was in High School I was really into the ecology movement/saving Nature from destruction GREEN PEACE. I went online and found this information on Abbey's novel "Hayduke Lives!"-

"In Edward Abbey's critically acclaimed bestseller, The Monkey Wrench Gang, George Washington Hayduke -- ex-Green Beret and "wilderness avenger, industrial development saboteur, night-time trouble-maker, barroom brawler, free-time lover" -- was last seen clinging to a cliff, under fire from both a helicopter and a posse. Now presumed dead by all who stalked him, whereabouts unknown to those who knew him best ... HAYDUKE LIVES! -- and he does it with the same fiery vengeance and inspired scheming that made him the hero of eco-warriors everywhere.

As the legendary phoenix rises from the ashes, so does Hayduke surface to rescue his beloved canyon country, threatened yet again by his environmental nemesis, Bishop Dudley Love, and a legion of uranium stripminers and industrial developers. The Bishop's Mormon followers warmly accept the destruction of Mother Earth, seeing it as a way to create jobs, thereby keeping their children from venturing to "California or Salt Lake City (one near as wicked and Godless a place as the other...)."

Now winding down their last few months of probation from their criminally adventurous, tractor-burning, bridge-blowing days as members of George's famed Monkey Wrench Gang are Seldom Seen Smith, A.K. (Doc) Sarvis, and Bonnie Abzug-Sarvis. Nervously watching the battle between developers and environmentalists unfold, wondering if out of some shadow or corner Hayduke might emerge, each is only mildly surprised -- but deeply fearful -- when he finally does appear. Seducing each out of his of her comfortable life, Hayduke reunites his gang this last time, and, along with the mysterious black-masked (sometimes sunglassed) horseman, they take on the establishment to topple GOLIATH, the world's largest mobile earth-moving machine, now carving its way through the desert.

In this, Edward Abbey's last work before his death, he resurrects the Monkey Wrench Gang against the glorious backdrop of the American Southwest that he defended and loved. With the code of the eco-warrior ringing in his ears, the reader is caught up in an explosion of militant hilarity, brought along for the ride as the gang maneuvers against the bad guys to stand up for what they stand on!" 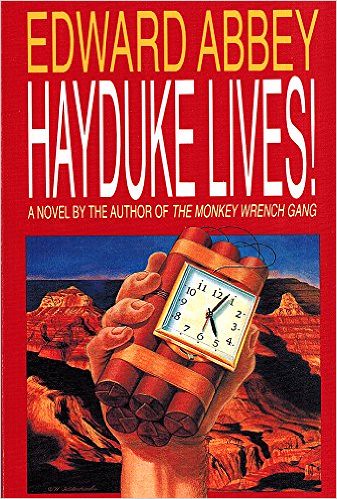 It is 2:44 PM Saturday afternoon. It is now hot humid and sticky after raining all morning and into the early afternoon hours.

"Scandal" a novel by Shusaku Endo Translated from the Japanese by Van C. Gessel

"Saturday Night and Sunday Morning" a novel by Alan Sillitoe

"On Histories And Stories" Selected Essays by A. S. Byatt

"African Calliope: A Journey to the Sudan" travel memoir by Edward Hoagland

"Love In The Ruins" a novel by Walker Percy

"Present At The Creation: My Years In The State Department" autobiography by Dean Acheson

"Resurrection: The Struggle For A New Russia" by David Remnick

"Soon to be a Major Motion Picture" autobiography by Abbie Hoffman

"Waiting For Sunrise" a novel by William Boyd

My time was limited this morning at the used books sale because I had to be at the Herrick District Public Library Used Books Store to do my volunteer shift starting at 10 o'clock AM. So I paid for my used books and drove over to the library. The book nook was busy today so I had little time to read. When I had time to read I read some more of the novel "Pinkerton's Sister" by Peter Rushforth. While at the library book nook I noticed in some one had donated a couple boxes of Christian academic books and I bought these for our library-

"The Tragic Vision And The Hebrew Tradition" by W. Lee Humphreys

"Paul And His Converts" (The Sprunt Lectures 1985) by Ernest Best

"The Mediation of Christ" Christology by Thomas F. Torrance

"A Theology Of The New Testament" by George Eldon Ladd

"Paul and the Thessalonians: The Philosophic Tradition of Pastoral Care" by Abraham J. Malherbe

"Jesus Christ Our Lord: Christology from a Disciple's Perspective" by C. Norman Kraus

"Paul Among Jews And Gentiles" by Krister Stendahl

"The Land: Place as Gift, Promise, and Challenge in Biblical Faith" by Walter Brueggeman

"Israel In Exile: A Theological Interpretation" by Ralph W. Klein

"The Historical Figure Of Jesus" by E. P. Sanders

"Reading Acts: A Literary and Theological Commentary on The Acts of the Apostles" by Charles H. Talbert

"Reading Luke: A Literary and Theological Commentary on the Third Gospel" by Charles H. Talbert

These are the used books I got from the library book nook today. I paid only $19.00 dollars for these books! If I was to buy them at a Christian bookstore I would have easily spent over $200.00 dollars. All these books look brand new. It was a steal!

So this hot sticky humid day crawls by. I am tired so I will close to write and read. Carol is sleeping and works tonight. She has to be at work tonight a 6 o'clock PM instead of 8 o'clock PM.

I bought a ton of used books the last couple of days. Now where am I going to put them is the question. Lately all the used books I have been buying wind-up on the lower level floor in stacks. The problem is that there is no more floor space. 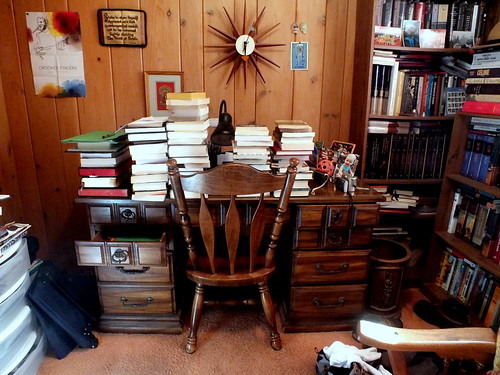 It is 7:02 PM Saturday evening in the Flow inside the Now. I am thinking of doing a video this evening for my BookTube channel. The problem is that I have 52 used books to show book lovers and that is too many to discuss in a eight minute video. I do not like to make videos over eleven minutes because I have nothing mind blowing to share. Why bore my viewers? I admire the people in BookTube who can say everything there is to say about a book in a few minutes. I look inside my brain when it comes to books and everything is a big Now Mind all books are One. How to separate Reality that is a unity into segments? Pieces of information about the All/sound bites/speaking in unknown tongues.

I am striving all the time for the cumulative effect. The reason why I write so much is because I believe after maybe writing thousands of words maybe something has been written worth reading. I think maybe after making hundreds of videos maybe one of them will communicate something about books/why read books and not stare into your cell phone screen all the time. Better yet why not stare into the face of God throughout the day.

I have always found communicating frustrating so I remain quiet or seek to communicate with silence or a few words. I rarely talk to people outside my cell. What is there worth talking about when we all face Eternity. Hell and Heaven.

So here I sit once again mumbling to myself. I suppose I will close to figure it all out. In the end just go for it and be real. 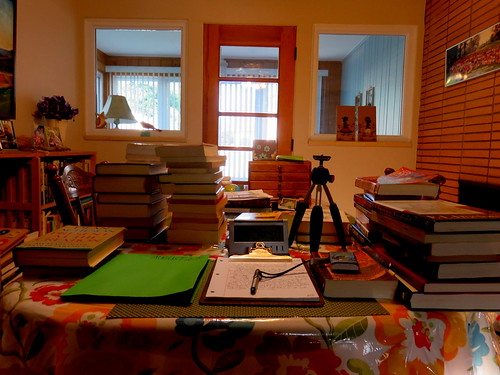 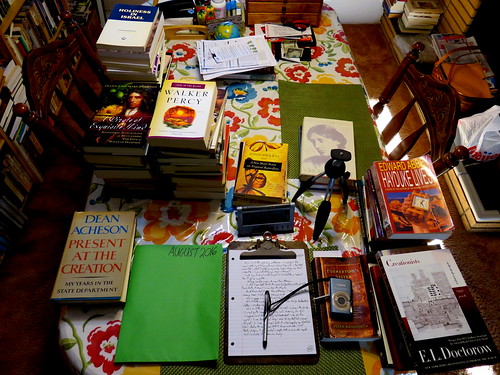