"The Wallcreepers" a novel by Nell Zink

"The Sleepwalkers" a novel by Hermann Broch

"A Confederacy of Dunces" a novel by John Kennedy Toole

"[1] After this opened Job his mouth, and cursed his day.
[2] And Job spake, and said,
[3] Let the day perish wherein I was born, and the night in which it was said, There is a man child conceived.
[4] Let that day be darkness; let not God regard it from above, neither let the light shine upon it.
[5] Let darkness and the shadow of death stain it; let a cloud dwell upon it; let the blackness of the day terrify it.
[6] As for that night, let darkness seize upon it; let it not be joined unto the days of the year, let it not come into the number of the months.
[7] Lo, let that night be solitary, let no joyful voice come therein.
[8] Let them curse it that curse the day, who are ready to raise up their mourning." Job 3:1-8

It is in the death flow 1:42 PM Wednesday afternoon. It is hot day so we have on our A/C. I like a cold dark cell in this world that is going up in flames. I read this morning that June 2016 was one of hottest months since records have been kept. Here in West Michigan we need rain. I have been watering our lawn and plants this week every night.

I got up this morning around 7:30 AM. I had a normal morning reading my books on The Book of Job. I am now coasting down the afternoon hours. I am not sure what I will read this afternoon.

Last night I closed the night reading a new book titled, "The Art Of Flight" a memoir by Sergio Pitol Translated From The Spanish By George Henson.

There is not much else to report so I will close to drift.

"[14] For as many as are led by the Spirit of God, they are the sons of God.
[15] For ye have not received the spirit of bondage again to fear; but ye have received the Spirit of adoption, whereby we cry, Abba, Father.
[16] The Spirit itself beareth witness with our spirit, that we are the children of God:
[17] And if children, then heirs; heirs of God, and joint-heirs with Christ; if so be that we suffer with him, that we may be also glorified together.
[18] For I reckon that the sufferings of this present time are not worthy to be compared with the glory which shall be revealed in us.
[19] For the earnest expectation of the creature waiteth for the manifestation of the sons of God.
[20] For the creature was made subject to vanity, not willingly, but by reason of him who hath subjected the same in hope,
[21] Because the creature itself also shall be delivered from the bondage of corruption into the glorious liberty of the children of God.
[22] For we know that the whole creation groaneth and travaileth in pain together until now.
[23] And not only they, but ourselves also, which have the firstfruits of the Spirit, even we ourselves groan within ourselves, waiting for the adoption, to wit, the redemption of our body.
[24] For we are saved by hope: but hope that is seen is not hope: for what a man seeth, why doth he yet hope for?
[25] But if we hope for that we see not, then do we with patience wait for it." Romans 8:14-25

Afflictions, though they seem severe;
In mercy oft are sent;
They stopped the prodigal’s career,
And forced him to repent.

Although he no relentings felt
Till he had spent his store;
His stubborn heart began to melt
When famine pinched him sore.

“What have I gained by sin, he said,
But hunger, shame, and fear;
My father’s house abounds with bread,
While I am starving here.

"I’ll go, and tell him all I’ve done,
And fall before his face
Unworthy to be called his son,
I’ll seek a servant’s place."

His father saw him coming back,
He saw, and ran, and smiled;
And threw his arms around the neck
Of his rebellious child.

"Father, I’ve sinned—but O forgive!"
"I’ve heard enough, he said,
“Rejoice my house, my son’s alive,
For whom I mourned as dead.

"Now let the fatted calf be slain,
And spread the news around;
My son was dead, but lives again,
Was lost, but now is found."

’Tis thus the Lord His love reveals,
To call poor sinners home;
More than a father’s love He feels,
And welcomes all that come.

[10] Likewise, I say unto you, there is joy in the presence of the angels of God over one sinner that repenteth.
[11] And he said, A certain man had two sons:
[12] And the younger of them said to his father, Father, give me the portion of goods that falleth to me. And he divided unto them his living.
[13] And not many days after the younger son gathered all together, and took his journey into a far country, and there wasted his substance with riotous living.
[14] And when he had spent all, there arose a mighty famine in that land; and he began to be in want.
[15] And he went and joined himself to a citizen of that country; and he sent him into his fields to feed swine.
[16] And he would fain have filled his belly with the husks that the swine did eat: and no man gave unto him.
[17] And when he came to himself, he said, How many hired servants of my father's have bread enough and to spare, and I perish with hunger!
( Collapse )

It is now in the Death Flow 7:58 PM Wednesday night Eastern Standard Time. It has been thus far a normal day of life for me. Hopefully nothing horrible will happen from now till I close down for the night. We never know when everything could go South.

This evening our middle child Josiah called to talk to his Mom and Dad. Josiah will be 34 years old this coming August. I will be 64 years old this coming August. When I was 34 years old Carol and I had been married going on three years. When we moved to Jackson Mississippi to attend Reformed Theological Seminary Caleb and Josiah were little, now they are grown men working and married. Our lives just speed day. We will soon stand before the judgment seat of Christ Jesus the King of Glory.

I also talk on the phone with our daughter Bethany. Beth called to talk to her mother, but Carol was still sleeping so I talked to Beth for awhile. Beth is now married with two little girls and pregnant with a third child.

I mainly read today a book titled, "The Art Of Flight" a memoir by Sergio Pitol Translated From The Spanish By George Henson.

I did not go anywhere today. It was a quiet day. I suppose I will close to read and wait for darkness to fall.

"[10] For we must all appear before the judgment seat of Christ; that every one may receive the things done in his body, according to that he hath done, whether it be good or bad.
[11] Knowing therefore the terror of the Lord, we persuade men; but we are made manifest unto God; and I trust also are made manifest in your consciences.
[12] For we commend not ourselves again unto you, but give you occasion to glory on our behalf, that ye may have somewhat to answer them which glory in appearance, and not in heart.
[13] For whether we be beside ourselves, it is to God: or whether we be sober, it is for your cause.
[14] For the love of Christ constraineth us; because we thus judge, that if one died for all, then were all dead:
[15] And that he died for all, that they which live should not henceforth live unto themselves, but unto him which died for them, and rose again." Second Corinthians 5:10-15 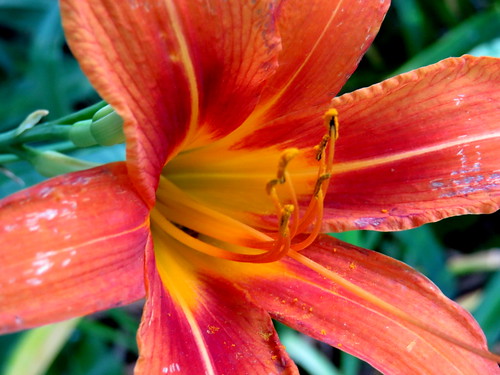