It is in the death flow 11:48 AM late Friday morning. It is another sunny day, but with some cloud cover. It is also not that warm today. There is a chill in the air today. A day to wear a sweat shirt or a long sleeve shirt.

"Christian Belief In A Postmodern World: The Full Wealth of Conviction" by Diogenes Allen

"The Last September" a novel by Elizabeth Bowen

"The Bone People" a novel by Keri Hulme

"The Thought and Character of William James" by Ralph Barton Perry

"Returning To Earth" a novel by Jim Harrison

"Hitler: A Study In Tyranny" by Alan Bullock

"Horn Of Africa" a novel by Philip Caputo

"The Night Country" a novel by Stewart O'Nan

After visiting thrift stores I came home to drift through day. Not much else to write about, so I will close.

I do not remember last night right now. I think I watched TV with my wife and then messed with our main computer. Carol went to bed early and I wandered my cell till 11 0'clock PM.

"God has Spoken in his Son: A biblical theology of Hebrews" by Peter T. O'Brien [New Studies In Biblical Theology]

"The Letter To The Hebrews" [The Pillar New Testament Commentary] by Peter T. O'Brien

"The Art of Pilgrimage: The Seeker's Guide to Making Travel Sacred" by Phil Cousineau

"The Art of Wandering: The Writer As Walker" by Merlin Coverley

"Psychogeography" Words by Will Self Pictures by Ralph Steadman

"The King In His Beauty: A Biblical Theology of the Old and New Testaments" by Thomas R. Schreiner

"American Smoke: Journeys To The End Of The Light" travel memoir by Iain Sinclair

"On the Road" a novel by Jack Kerouac

"The Way of a Pilgrim" author unknown Translated from the Russian by R. M. French

"The Art of Prayer: An Orthodox Anthology" complied by Igumen Chariton of Valamo translated by E. Kadloubovsky & E. M. Palmer edited with an introduction by Timothy Ware

"The Age of Pilgrimage: The Medieval Journey To God" by Jonathan Sumption

"The Pilgrim's Progress" by John Bunyan 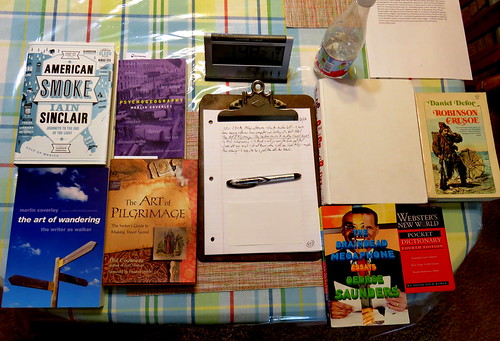 This is how fascism comes to America Trump captures the nation’s attention on the campaign trail
The Republican candidate continues to dominate the presidential contest.

By Robert Kagan May 18

Robert Kagan is a senior fellow at the Brookings Institution and a contributing columnist for The Post.

The Republican Party’s attempt to treat Donald Trump as a normal political candidate would be laughable were it not so perilous to the republic. If only he would mouth the party’s “conservative” principles, all would be well.

But of course the entire Trump phenomenon has nothing to do with policy or ideology. It has nothing to do with the Republican Party, either, except in its historic role as incubator of this singular threat to our democracy. Trump has transcended the party that produced him. His growing army of supporters no longer cares about the party. Because it did not immediately and fully embrace Trump, because a dwindling number of its political and intellectual leaders still resist him, the party is regarded with suspicion and even hostility by his followers. Their allegiance is to him and him alone.

And the source of allegiance? We’re supposed to believe that Trump’s support stems from economic stagnation or dislocation. Maybe some of it does. But what Trump offers his followers are not economic remedies — his proposals change daily. What he offers is an attitude, an aura of crude strength and machismo, a boasting disrespect for the niceties of the democratic culture that he claims, and his followers believe, has produced national weakness and incompetence. His incoherent and contradictory utterances have one thing in common: They provoke and play on feelings of resentment and disdain, intermingled with bits of fear, hatred and anger. His public discourse consists of attacking or ridiculing a wide range of “others” — Muslims, Hispanics, women, Chinese, Mexicans, Europeans, Arabs, immigrants, refugees — whom he depicts either as threats or as objects of derision. His program, such as it is, consists chiefly of promises to get tough with foreigners and people of nonwhite complexion. He will deport them, bar them, get them to knuckle under, make them pay up or make them shut up.

That this tough-guy, get-mad-and-get-even approach has gained him an increasingly large and enthusiastic following has probably surprised Trump as much as anyone else. Trump himself is simply and quite literally an egomaniac. But the phenomenon he has created and now leads has become something larger than him, and something far more dangerous.

Republican politicians marvel at how he has “tapped into” a hitherto unknown swath of the voting public. But what he has tapped into is what the founders most feared when they established the democratic republic: the popular passions unleashed, the “mobocracy.” Conservatives have been warning for decades about government suffocating liberty. But here is the other threat to liberty that Alexis de Tocqueville and the ancient philosophers warned about: that the people in a democracy, excited, angry and unconstrained, might run roughshod over even the institutions created to preserve their freedoms. As Alexander Hamilton watched the French Revolution unfold, he feared in America what he saw play out in France — that the unleashing of popular passions would lead not to greater democracy but to the arrival of a tyrant, riding to power on the shoulders of the people.

This phenomenon has arisen in other democratic and quasi-democratic countries over the past century, and it has generally been called “fascism.” Fascist movements, too, had no coherent ideology, no clear set of prescriptions for what ailed society. “National socialism” was a bundle of contradictions, united chiefly by what, and who, it opposed; fascism in Italy was anti-liberal, anti-democratic, anti-Marxist, anti-capitalist and anti-clerical. Successful fascism was not about policies but about the strongman, the leader (Il Duce, Der Führer), in whom could be entrusted the fate of the nation. Whatever the problem, he could fix it. Whatever the threat, internal or external, he could vanquish it, and it was unnecessary for him to explain how. Today, there is Putinism, which also has nothing to do with belief or policy but is about the tough man who single-handedly defends his people against all threats, foreign and domestic.

To understand how such movements take over a democracy, one only has to watch the Republican Party today. These movements play on all the fears, vanities, ambitions and insecurities that make up the human psyche. In democracies, at least for politicians, the only thing that matters is what the voters say they want — vox populi vox Dei. A mass political movement is thus a powerful and, to those who would oppose it, frightening weapon. When controlled and directed by a single leader, it can be aimed at whomever the leader chooses. If someone criticizes or opposes the leader, it doesn’t matter how popular or admired that person has been. He might be a famous war hero, but if the leader derides and ridicules his heroism, the followers laugh and jeer. He might be the highest-ranking elected guardian of the party’s most cherished principles. But if he hesitates to support the leader, he faces political death.

In such an environment, every political figure confronts a stark choice: Get right with the leader and his mass following or get run over. The human race in such circumstances breaks down into predictable categories — and democratic politicians are the most predictable. There are those whose ambition leads them to jump on the bandwagon. They praise the leader’s incoherent speeches as the beginning of wisdom, hoping he will reward them with a plum post in the new order. There are those who merely hope to survive. Their consciences won’t let them curry favor so shamelessly, so they mumble their pledges of support, like the victims in Stalin’s show trials, perhaps not realizing that the leader and his followers will get them in the end anyway.

A great number will simply kid themselves, refusing to admit that something very different from the usual politics is afoot. Let the storm pass, they insist, and then we can pick up the pieces, rebuild and get back to normal. Meanwhile, don’t alienate the leader’s mass following. After all, they are voters and will need to be brought back into the fold. As for Trump himself, let’s shape him, advise him, steer him in the right direction and, not incidentally, save our political skins.

What these people do not or will not see is that, once in power, Trump will owe them and their party nothing. He will have ridden to power despite the party, catapulted into the White House by a mass following devoted only to him. By then that following will have grown dramatically. Today, less than 5 percent of eligible voters have voted for Trump. But if he wins the election, his legions will likely comprise a majority of the nation. Imagine the power he would wield then. In addition to all that comes from being the leader of a mass following, he would also have the immense powers of the American presidency at his command: the Justice Department, the FBI, the intelligence services, the military. Who would dare to oppose him then? Certainly not a Republican Party that lay down before him even when he was comparatively weak. And is a man like Trump, with infinitely greater power in his hands, likely to become more humble, more judicious, more generous, less vengeful than he is today, than he has been his whole life? Does vast power un-corrupt?

This is how fascism comes to America, not with jackboots and salutes (although there have been salutes, and a whiff of violence) but with a television huckster, a phony billionaire, a textbook egomaniac “tapping into” popular resentments and insecurities, and with an entire national political party — out of ambition or blind party loyalty, or simply out of fear — falling into line behind him.
Collapse