"American Smoke: Journeys To The End Of The Light" travel memoir by Iain Sinclair

"Neuromancer" a novel by William Gibson

"Under The Volcano" a novel by Malcom Lowry

"The Place of Dead Roads" a novel by William Burroughs

"Charles Olson: The Allegory of a Poet's Life" biography by Tom Clark

"On the Road" by Jack Kerouac 50th Anniversary Edition

"Nazi Literature In The Americas" by Roberto Bolano [Translated from the Spanish by Chris Andrews]
http://www.nytimes.com/2008/02/24/books/review/D-Erasmo-t.html?_r=0

It is now in the death flow 10:07 AM Tuesday morning. Outside this morning it is gray and rainy.

I got up this morning around 7 o'clock AM. I messed with our main computer till my wife arrived home from work. She has gone to bed for the day and I have been reading a commentary on The Epistle to the Romans. Not much else going on this morning. It looks like it is going to be another quiet day for me.

There is nothing pressing on my mind this morning. I do not plan to leave my cell today due to the bad weather.

I will drift through the day reading my books, watching birds and writing in my paper diary. It will soon be over. "Watch therefore, for ye know neither the day nor hour wherein the Son of man cometh" Matt. 25:13

"[1] Then shall the kingdom of heaven be likened unto ten virgins, which took their lamps, and went forth to meet the bridegroom.
[2] And five of them were wise, and five were foolish.
[3] They that were foolish took their lamps, and took no oil with them:
[4] But the wise took oil in their vessels with their lamps.
[5] While the bridegroom tarried, they all slumbered and slept.
[6] And at midnight there was a cry made, Behold, the bridegroom cometh; go ye out to meet him.
[7] Then all those virgins arose, and trimmed their lamps.
[8] And the foolish said unto the wise, Give us of your oil; for our lamps are gone out.
[9] But the wise answered, saying, Not so; lest there be not enough for us and you: but go ye rather to them that sell, and buy for yourselves.
[10] And while they went to buy, the bridegroom came; and they that were ready went in with him to the marriage: and the door was shut.
[11] Afterward came also the other virgins, saying, Lord, Lord, open to us.
[12] But he answered and said, Verily I say unto you, I know you not.
[13] Watch therefore, for ye know neither the day nor the hour wherein the Son of man cometh." Matthew 25:1-13

It is now in the death flow 12:34 PM Tuesday afternoon. I left my cell to get some cash and then to visit near by thrift stores to search for used books to add to our library. I found these used books today-

"A Place In The World Called Paris" Edited by Steven Barclay/Illustrated By Miles Hyman/Foreword by Susan Sontag Paris, As Seen By The Twentieth Century's Greatest Writers

"Ruin the Sacred Truths: Poetry and Belief from the Bible to the Present" literary study by Harold Bloom

"Tracks" a novel by Louise Erdrich

I received in the mail this afternoon a book I had ordered titled, "Nazi Literature In The Americas" by Roberto Bolano [Translated from the Spanish by Chris Andrews].

There is not much else to report. Outside it is raining and I will close to wait for the End. 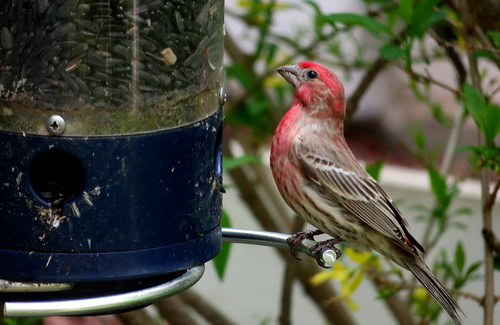 "In Rue du Chateau-des-Rentiers, just by the Nicolas Flamel shelter, is a municipal fumigation center which is the workplace of Martini, a tough guy who can put up with anything, including the immediate downing of a liter of the aperitif wine that earned him his nickname. Martini has the least fun-filled of jobs and when he invites me, as he does regularly, to accompany him to work, he warns me-and this is what makes me turn him down-that it will nauseate me and put me in urgent need of cleansing my stomach with a good does of dry white wine, because according to him, and I am inclined to take his word for it, it is truly unappetizing and you need to have a cast-iron constitution and call frequently on Dutch courage, because habituation and insensitivity come only after long years of experience, something to which most workers are unwilling to subject themselves, preferring to sacrifice their pension and go and look elsewhere. Being close to two shelters, and run by the City of Paris, this laundry is responsible for cleaning the clothes of the homeless, and every evening, as soon as a cohort of derelicts has been mustered in an observation anteroom, they are asked to strip naked and hosed down with cresol disinfectant, after which the fumigators come with wooden pitchforks to pile the men's clobber up like manure before tossing it into steamers for treatment out of sight but not beyond the sense of smell, which takes a big hit, for the tattered garments are rife with the piss, vomit and like minor accidents with which dozens of habitual winos have "soiled" them. And even when they have been removed from the tubs the operation is far from complete, because the rags are steam-soaked, twisted, rumpled and tangled up and must be sorted, identified by function, and wrung out before being hung up to dry on frames. For my part, all I know of shelters is the aspect familiar to the boarders, and whatever my interlocutor may think, I would rather remain in ignorance of the aspect familiar to the staff.

But Martini has more than this to tell, because he also adds variety to the joys of his profession by performing home disinfections, meaning that he fumigates the dwellings of the sick and the dead in the neighborhood, and so great is his experience in this regard that he claims to know, from the moment he enters a room, whether a stiff is a victim of cancer, tuberculous, syphilis or some other disease, and this on the sole basis of the smell impregnating the walls, None of which, however, is especially surprising. Close acquaintanceship with someone who works at Lamy-Trouvain, the funeral directors, is all that is required to learn in intimate detail just how corpses are washed and their strategic orifices stoppered. But what fascinated me in Martini's stories was his description of certain lodgings that he had been obliged to enter, generally those of old men and women who had died in a state of incredible physical deprivation and surroundings of hellish darkness, fetor, and terror, not to mention those of suicides, their ends becoming apparent long after the fact by virtue of telltale odors escaping from beneath their doors, as for instance in the case of a beautiful young woman asphyxiated three weeks previously whose rear-end was swarming with worms of various girths." pg. 277,278 a quote from "Paris Vagabond" by Jean-Paul Clebert.
Collapse