It is 11:20 AM late Wednesday morning in the death flow. It is a cold dark rainy dreary day here by Lake Michigan. A good day to find a dark cave to sit in till the world goes up in flames.

I got up this morning around 6:33 AM. It is blessing to be able to get out of bed at my advanced age. I got up made a pot of coffee and then messed with our main computer. After messing with our main computer I made myself a bowl of oatmeal for breakfast. After eating my oatmeal I wrote in my paper diary. I read this morning my new commentary on the Epistle to the Romans "The Epistle to the Romans" [The New International Greek Testament Commentary] by Richard N. Longenecker. Carol came home from work around 8:30 AM. Carol and I left around 9 o'clock AM to sign papers at our local credit union. When we got home Carol went to bed and I left around 10 o'clock AM to get a loaf of bread and to visit the Goodwill Thrift store. At the Goodwill Thrift Store I found these used books to ADD to our library-

"The Country Girls Trilogy And Epilogue" by Edna 'O'Brien

"Emerson: The Mind On Fire" a biography by Robert D. Richardson Jr.

"Dvorak in Love: A light-hearted dream" a novel by Josef Skvorecky [Translated from the Czech by Paul Wilson]

"The Good Terrorist" a novel by Doris Lessing

"Virginia" A Play By Edna O'Brien

"How to Read and Why" by Harold Bloom

"The Birth of Pleasure" Man-woman relationships by Carol Gilligan

"Henry & June" From the Unexpungated Diary of Anais Nin

"The Passion of Emily Dickinson" literary study by Judith Farr

After visiting a Goodwin Thrift Store I drove home in a cold rain to drift through the day. Carol is sleeping and I plan to read and wait for darkness to cover me. There is no way of escape. 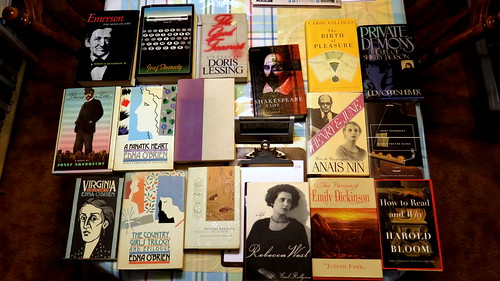 I have recently been reading "The Novel: A Biography" by Michael Schmidt and came across this conversation where Schmidt discusses the history of the novel with Dr. Raj Persaud. A very interesting conversation on the novel.

"The Glory Of The Empire" A Novel, A History by Jean D'Ormesson Introduction By Daniel Mendelsohn [Translated From The French By Barbara Bray]

"The Glory of the Empire is the rich and absorbing history of an extraordinary empire, at one point a rival to Rome. Rulers such as Basil the Great of Onessa, who founded the Empire but whose treacherous ways made him a byword for infamy, and the romantic Alexis the bastard, who dallied in the fleshpots of Egypt, studied Taoism and Buddhism, returned to save the Empire from civil war, and then retired “to learn to die,” come alive in The Glory of the Empire, along with generals, politicians, prophets, scoundrels, and others. Jean d’Ormesson also goes into the daily life of the Empire, its popular customs, and its contribution to the arts and the sciences, which, as he demonstrates, exercised an influence on the world as a whole, from the East to the West, and whose repercussions are still felt today. But it is all fiction, a thought experiment worthy of Jorge Luis Borges, and in the end The Glory of the Empire emerges as a great shimmering mirage, filling us with wonder even as it makes us wonder at the fugitive nature of power and the meaning of history itself." Product Description

"Mavis Gallant is a contemporary legend, a frequent contributor to The New Yorker for close to fifty years who has, in the words of The New York Times, “radically reshaped the short story for decade after decade.” Michael Ondaatje’s new selection of Gallant’s work gathers some of the most memorable of her stories set in Europe and Paris, where Gallant has long lived. Mysterious, funny, insightful, and heartbreaking, these are tales of expatriates and exiles, wise children and straying saints. Together they compose a secret history, at once intimate and panoramic, of modern times." Product Description

"How Should a Person Be? A Novel by Sheila Heti

What is found below is a description of the novel "How Should a Person Be?" grabbed from Amazon-

Named a Book of the Year by

A raw, startling, genre-defying novel of friendship, sex, and love in the new millennium―a compulsive read that's like "spending a day with your new best friend" (Bookforum)

By turns loved and reviled upon its U.S. publication, Sheila Heti's "breakthrough novel" (Chris Kraus, Los Angeles Review of Books) is an unabashedly honest and hilarious tour through the unknowable pieces of one woman's heart and mind. Part literary novel, part self-help manual, and part vivid exploration of the artistic and sexual impulse, How Should a Person Be? earned Heti comparisons to Henry Miller, Joan Didion, Mary McCarthy, and Flaubert, while shocking and exciting readers with its raw, urgent depiction of female friendship and of the shape of our lives now. Irreverent, brilliant, and completely original, Heti challenges, questions, frustrates, and entertains in equal measure. With urgency and candor she asks: What is the most noble way to love? What kind of person should you be?

"“Reality hunger” is an unwittingly apt phrase, because among the difficulties of this kind of storytelling is that one can never get enough reality into it. Realism is perpetually hungry, and keeps on trying new ways—every fifty years or so—to break into the larder. The writer who is seeking “life,” who is trying to write “from life,” is always unappeased, because no bound manuscript can ever be “real” enough. And this hunger is shared by most writers, not just by those who are hostile to conventional fictionality. Heti may include real e-mails and recordings of actual conversations, but, of course, her book is shaped and plotted (however lightly), and uses fiction as well as autobiography. Since most readers do not know who Heti’s friends are or how Heti herself lives, the characters will effectively appear invented—as Heti doubtless understands. Her book could always be more real; it could always be more directly “from life.”" James Wood

Please check out the book, "Reality Hunger: A Manifesto" by David Shields.