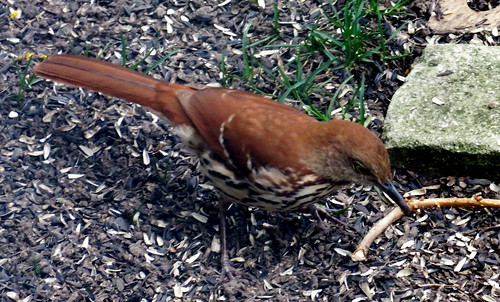 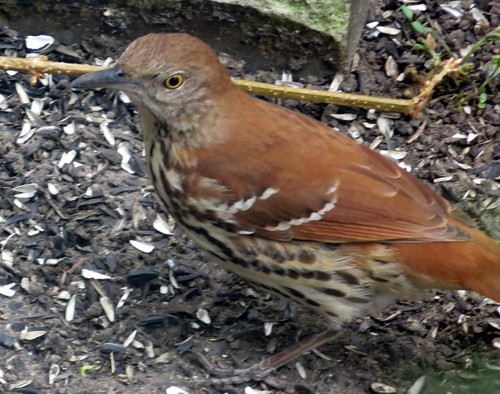 It is in the flow 11:41 AM late Thursday morning. It is here a gray and rainy day. Because of the rain and the recent warm weather everything is blooming/blossoming/flowering. Yesterday I mowed our lawn for the first time this year. I also started working on my flower garden.

I got up this morning around 5:45 AM. A weird disturbing dream drove me out of bed this morning. So I got up and made a pot of coffee and messed with our main computer.

When Carol got up this morning I made us oatmeal for breakfast. Carol has a Spring cold. I hope I do not get her cold.

I have been doing nothing this morning. I am out of it today. I did read some more of the book, "Jesus Have I Loved, but Paul? A Narrative Approach To the Problem Of Pauline Christianity" by J.R. Daniel Kirk. I also read a little of the book, "The Fourfold Gospel: A Theological Reading of the New Testament Portraits of Jesus" by Francis Watson.

I also wrote in my paper diary this morning and wandered my cell. Existence keeps crawling by waving a white flag.

Last night I watched taped shows with my wife. She went to bed early due to being sick. I stayed up and read late into the night from these two books, "Paris Vagabond" by Jean-Paul Clebert and "The Other Paris" by Luc Sante.

So my life crawls by normal. Not much else to report this morning. I will read my books today and write in my diary. It will soon be time to close for another lifetime.

"[1] We then that are strong ought to bear the infirmities of the weak, and not to please ourselves.
[2] Let every one of us please his neighbour for his good to edification.
[3] For even Christ pleased not himself; but, as it is written, The reproaches of them that reproached thee fell on me.
[4] For whatsoever things were written aforetime were written for our learning, that we through patience and comfort of the scriptures might have hope.
[5] Now the God of patience and consolation grant you to be likeminded one toward another according to Christ Jesus:
[6] That ye may with one mind and one mouth glorify God, even the Father of our Lord Jesus Christ.
[7] Wherefore receive ye one another, as Christ also received us to the glory of God." Romans 15:1-7

Below is a list of used books found at thrift stores that I displayed and briefly described in my last BookTube video. In the video I butchered the names of writers and books titles. What can I say, but that I am uneducated and that I try my hardest not to come off as a total bumpkin.

"The Vanishing Act Of Esme Lennox" a novel by Maggie O'Farrell

"The Buddha From Brooklyn" biography by Martha Sherrill
http://marthasherrill.com/the-buddha-from-brooklyn/

"This Side of Brightness" a novel by Colum McCann
https://www.kirkusreviews.com/book-reviews/colum-mccann/this-side-of-brightness/

"The Doctor's Daughter" a novel by Hilma Wolitzer

"The Map Of Love" a novel by Ahdaf Soueif

"The Years" a novel by Virginia Woolf

"A Mother And Two Daughters" a novel by Gail Godwin

"Palimpsest" a memoir by Gore Vidal

"The Gospel According To John I-XII" [The Anchor Bible Commentary] by Raymond E. Brown

"The Gospel According To John XIII-XXI" [The Anchor Bible Commentary] by Raymond E. Brown

"The Community of the Beloved Disciple: The Life, Loves, and Hates of an Individual Church in New Testament Times" by Raymond E. Brown

"We Are Not Ourselves" a novel by Matthew Thomas
http://www.matthewthomasauthor.com/books/

"Blue Arabrsque: A Search for the Sublime" Art History/Memoir by Patricia Hampl

"Death Be Not Proud" a memoir by John Gunther

"Inside: The Biography Of John Gunther" biography by Ken Cuthbertson Foreword by William L. Shirer

"The World As I Found It" a novel by Bruce Duffy
http://www.nytimes.com/1987/10/11/books/young-wittgenstein.html

"The Secret Life Of Salvador Dali" by Salvalor Dali
https://en.wikipedia.org/wiki/The_Secret_Life_of_Salvador_Dal%C3%AD