It is in the divine flow of life 10:05 AM Wednesday morning. Outside this morning it is snowing. It is very cold and it is a good day to stay inside and wait for Spring.

I got up this morning around 7:30 AM. I made myself oatmeal for breakfast. I ate my oatmeal messing with our main computer. Carol called telling me she was ready to come home from work.

This morning I have been reading "A Christian Directory" by Richard Baxter. Not much going on this morning. I plan to spend day reading my books and writing in my diary. I thought about going to the bank and getting some money, but the weather is too bad for traveling any where.

Last night I made another book collecting video, listened to music and read, "A Constellation Of Vital Phenomena" a novel by Anthony Marra. Now it is another day to seek the Lord Jesus Christ. "When Jesus heard that, He said to them, "Those who are well have no need of a physician. but those who are sick. But go and learn what this means: 'I desire mercy and not sacrifice.' For I did not come to call the righteous, but sinners, to repentance" Matthew 9:12,13

I do not know what else to write so I will close to read "A Christian Directory" by Richard Baxter. I remember also reading last night these two books-

"The Hermitage Within" by A Monk

"A Quest For Godliness: The Puritan Vision of the Christian Life" by J. I. Packer

I plan to quote today in my online diaries Baxter's "A Christian Directory". I will close to wait for the end.

"[1] Let us therefore fear, lest, a promise being left us of entering into his rest, any of you should seem to come short of it.
[2] For unto us was the gospel preached, as well as unto them: but the word preached did not profit them, not being mixed with faith in them that heard it.
[3] For we which have believed do enter into rest, as he said, As I have sworn in my wrath, if they shall enter into my rest: although the works were finished from the foundation of the world.
[4] For he spake in a certain place of the seventh day on this wise, And God did rest the seventh day from all his works.
[5] And in this place again, If they shall enter into my rest.
[6] Seeing therefore it remaineth that some must enter therein, and they to whom it was first preached entered not in because of unbelief" Hebrews 4:1-6

It is now in the snow flow 11:19 AM Wednesday morning Eastern Standard Time. As I mentioned earlier this morning I wanted to quote from Richard Baxter's treatise "A Christian Directory". Several years ago I came to see what attracted me to the writings of the 17th century English Puritans was their words/language. I am into the use of words to describe realities/spiritual realities/theological language/mystical language.
To me Richard Baxter is a master at describing biblical realities/spiritual realities. (read the chapter four 'The Practical Writings of the English Puritans' essay found in the book, "A Quest For Godliness: The Puritan Vision of the Christian Life" by J. I. Packer). I will quote now Baxter (this spoke to me personally)-

"14. Sometimes, the guilt of renewed infirmities or decays doth renew distrust, and make us shrink; and we are like the child in the mother's arms, that feareth when he looseth his hold, as if his safety were more in his hold of her, than her hold of him. Weak duties have weak expectations of success. In this case, what an excellent remedy hath faith, in looking to the perpetual intercession of Christ. Is he praying for us in the heavens, and shall we not be bold to pray, and expect an answer? O remember that he is not weak, when we are weak; and that it concerneth us, that he prayeth for us; and that we have now an unchangeable Priest, who is able to save them to the uttermost, or to perpetuity, "that come (sincerely) to God by him, seeing he ever liveth to make intercession for them," Heb. vii.24,25. If you heard Christ pray for you, would it not encourage you to pray, and persuade you that God would not reject you? Undoubtedly it would." Richard Baxter pg. 68 Christian Ethics

I could quote Richard Baxter all day, but I will refrain myself. Go out and buy "The Practical Works of Richard Baxter" Four Volumes or read them online.

Check out these books that go along with the above-

"Light and Heat: The Puritan View of the Pulpit" by Dr. R. Bruce Bickel

"The experimental preaching of the Puritan focused on the preaching of Christ. As Scripture clearly shows, evangelism must bear witness to the record God has given of His only begotten Son (Acts 2:30-36; 5:42; 8:35; Rom. 16:25; 1 Cor. 2:2; Gal. 3:1). The Puritans thus taught that any preaching in which Christ does not have the preeminence is not valid experiential preaching. William Perkins said that the heart of all preaching was to "preach one Christ by Christ to the praise of Christ." According to Thomas Adams, "Christ is the sum of the whole Bible, prophesied, typified, prefigured, exhibited, demonstrated, to be found in every leaf, almost in every line, the Scriptures being but as it were the swaddling bands of the child Jesus." Think of Christ as the very substance, marrow, soul, and scope of the whole Scriptures," Isaac Ambrose said.

In this Christ-centered context, Puritan evangelism was marked by a discriminating application of truth to experience. Discriminatory preaching defines the difference between the non-Christian and the Christian. Discriminatory preaching pronounces wrath of God and eternal condemnation upon the unbelieving and impenitent. It likewise offers the forgiveness of sins and eternal life to all who embrace by true faith Jesus Christ as Savior and Lord. Such preaching teaches that if our religion is not experimental, we will perish-not because experience itself saves, but because Christ who saves sinners must be experienced personally as the Rock upon whom our eternal hope is built (Matt. 7:22-27; 1 Cor. 1:30; 2:2).

The Puritans were very aware of the deceitfulness of the human heart. Consequently, Puritan evangelist took great pains to identify the marks of grace that distinguish the church from the world, true believers from merely professing believers, and saving faith from temporary faith. Thomas Shepard in The Ten Virgins, Matthew Mead in The Almost Christian Discovered, Jonathan Edwards in Religious Affections, and other Puritans wrote dozen of works to differentiate imposters from true believers.

That kind of discriminatory preaching is extremely rare today. Even in conservative evangelical churches, head knowledge of scriptural truth is often a substitute for heart experience, or, what is equally unscriptural, heart experience is substituted for head knowledge. Experimental preaching calls for both head knowledge and heart experience; its goal, according to John Murray, is "intelligent piety." Experimental preaching is "Christianity brought home to men's business and bosoms," Robert Burns said. "The principle on which experimental religion rests is simply this, that Christianity should not only be known, and understood, and believed, but also felt, and enjoyed, and practically applied." pg, 18,19 Joel Beeke "Puritan Evangelism" 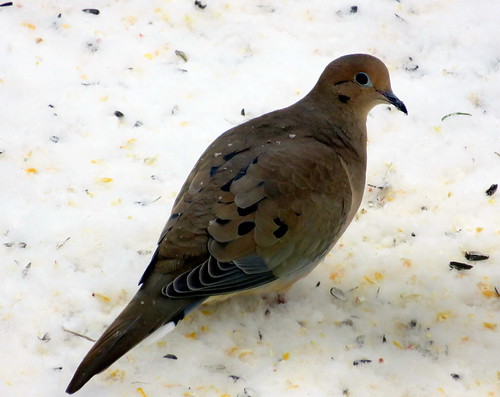 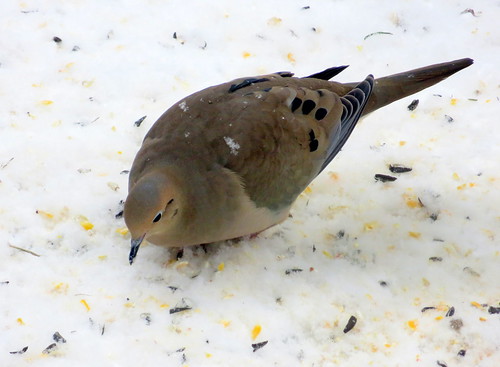 It is now in the ice snow flow 4:10 PM Wednesday late afternoon or early evening, all depends where you are living out your life. I just came in the house after shoveling snow off our driveway and walks. I also fed the birds while outside. I could have waited for our snow plow man to come and clear our driveway, but you never know if he is going to show up.

I have been basically watching our birds by our bird feeder and reading "A Christian Directory" by Richard Baxter. Not much else going on around here today. I did get a book in the mail today titled, "In the School of Love: An Anthology of Early Cistercian Texts" Selected and annotated by Edith Scholl OCSO/Introduction by M. Basil Pennington OCSO. I am a student of Monastic Spirituality.

I have no plans for the evening hours. Last night I read and listened to music before going to bed around 11 o'clock PM. I have not felt sleepy all day, which is nice. I usually feel more awake during the day if I get out of bed in the morning around 7:30 AM.

I thought I would quote some more of "A Christian Directory" by Richard Baxter this afternoon.

"Direct. VII. Consider, that when God doth not govern you, you are ruled by the flesh, the world, and the devil.-And what right or fitness they have to govern you, and what is their work, and final reward, methinks you should easily discern. "If ye live after the flesh, ye shall die," Rom. viii.13. "And if ye sow to the flesh, of the flesh ye shall reap corruption," Gal.vi.8. It will strike you with horror, if, in the hour of temptation, you would but think: I am now going to disobey my God, and to obey the flesh, the world, or the devil, and to prefer their will before His will.

Direct. VIII. Turn your eye upon the rebellious nations of the earth, and upon the state of the most malignant and ungodly men; and consider, that such madness and misery as you discern in them, every wilful disobedience to God doth tend to, and partaketh of in its degree.-To see a swinish drunkard in his vomit; to hear a raging bedlam curse and swear; or a malignant wretch blaspheme and scorn at a holy life: to hear how foolishly they talk against God, and see how maliciously they hate his servants, one would think should turn one's stomach against all sin for ever. To think what beasts or incarnate devils many of the ungodly are; to think what confusion and inhumanity possess most of those nations that know not God, one would think should make the least degree of sin seem odious to us, when the dominion and ripeness of it are so odious." Richard Baxter pg. 76 Christian Ethics