"The Waste Land And Other Poems" T. S. Elliot

"The Sixties" a memoir by Jenny Diski

"Carthusian Spirituality: The Writings Of Hugh Of Balma and Guigo De Ponte" [The Classics Of Western Spirituality]

"Moral Reflections on the Book of Job" Volume 1 Preface and Books 1-5 Translated by Brian Kerns, OCSO

"House Of Leaves" a novel by Mark Z. Danielewski 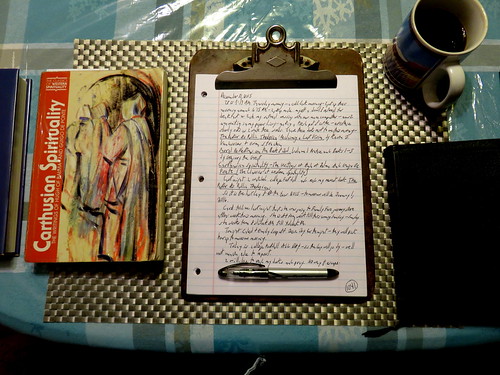 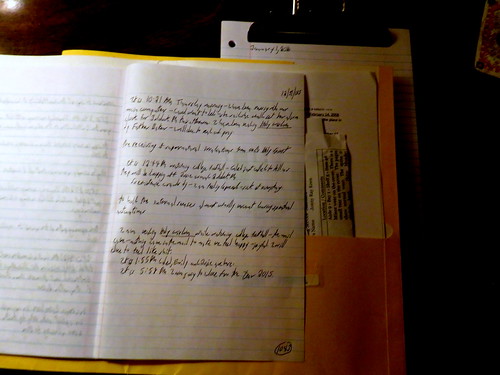 It is in the divine flow of existence 10:50 AM Thursday morning. It is another cold gray snowy day here in West Michigan. It is the Last Day of the year 2015. Time to bring in the New Year.

"Holy Wisdom Or Directions for the Prayer of Contemplation Extracted out of more than Forty Treatises" By The Ven. Father F. Augustin Baker A Monk Of The English Congregation Of The Holy Order Of St. Benedict

"Carthusian Spirituality: The Writings Of Hugh Of Balam And Guigo De Ponte" [The Classics Of Western Spirituality]

Carol got home late from work because after work she went grocery shopping-get few food items to bring in the New Year.

Tonight Caleb and Emily are dropping off our granddaughter Josie Joy to spend the night with Papa and Nonie.

Last night I watched college football bowl games and read "The Pastor As Public Theologian: Reclaiming a Lost Vision" by Kevin J. Vanhoozer And Owen Strachan. I went to bed around 11 o'clock PM and read late into the night "The Pastor As Public Theologian". Now it is the last day of the Year 2015. Tonight I put away my December 2015 Diary and tomorrow morning start page 1 of my January 1, 2016 Diary. Soon time will be no more and we will be in the New Creation reigning with the Lord of Glory the Lord Jesus Christ, the saints and the elect angels.

Today I will watch college football bowl games all day. Well not much else to report so I will close to prepare for eternity.

[1] The heavens declare the glory of God; and the firmament sheweth his handywork.
[2] Day unto day uttereth speech, and night unto night sheweth knowledge.
[3] There is no speech nor language, where their voice is not heard.
[4] Their line is gone out through all the earth, and their words to the end of the world. In them hath he set a tabernacle for the sun,
[5] Which is as a bridegroom coming out of his chamber, and rejoiceth as a strong man to run a race.
[6] His going forth is from the end of the heaven, and his circuit unto the ends of it: and there is nothing hid from the heat thereof.
[7] The law of the LORD is perfect, converting the soul: the testimony of the LORD is sure, making wise the simple.
[8] The statutes of the LORD are right, rejoicing the heart: the commandment of the LORD is pure, enlightening the eyes.
[9] The fear of the LORD is clean, enduring for ever: the judgments of the LORD are true and righteous altogether.
[10] More to be desired are they than gold, yea, than much fine gold: sweeter also than honey and the honeycomb.
[11] Moreover by them is thy servant warned: and in keeping of them there is great reward.
[12] Who can understand his errors? cleanse thou me from secret faults.
[13] Keep back thy servant also from presumptuous sins; let them not have dominion over me: then shall I be upright, and I shall be innocent from the great transgression.
[14] Let the words of my mouth, and the meditation of my heart, be acceptable in thy sight, O LORD, my strength, and my redeemer.

"6. Constantly to this expression of St. Bernard, mystic writers do teach that the proper end of
a contemplative life is the attaining unto an habitual and almost uninterrupted perfect union with
God in the supreme point of the spirit; and such an union as gives the soul a fruitive possession of
Him, and a real experimental perception of His divine presence in the depth and centre of the spirit,
which is fully possessed and filled with Him alone; not only all deliberate affections to creatures
being excluded, but in a manner all images of them also, at least so far as they may be distractive
to the soul.

7. The effects of this blessed, perceptible presence of God in perfect souls are unspeakable and
divine; for He is in them both as a principle of all their actions internal and external, being the life
of their life and spirit of their spirits; and also as the end of them, directing both the actions and
persons to Himself only. He is all in all things unto them: a light to direct securely all their steps,
and to order all their workings, even those also which seem the most indifferent, the which by the
guidance of God’s Holy Spirit do cause a farther advancement of them to a yet more immediate
union. He is a shield to protect them in all temptations and dangers, an internal force and vigour
within them, to make them do and suffer all things whatsoever His pleasure is they should do or
suffer. They not only believe and know, but even feel and taste Him to be the universal, infinite
Good. By means of a continual conversation with Him they are reduced to a blessed state of a
perfect denudation of spirit, to an absolute, internal solitude, a transcendancy and forgetfulness of
all created things, and especially of themselves, to an heavenly-mindedness and fixed attention to
God only, and this even in the midst of employments to others never so distractive; and finally, to

a gustful knowledge of all His infinite perfections, and a strict application of their spirits by love
above knowledge, joined with a fruition and repose in Him with the whole extent of their wills; so
that they become after an inexpressible manner partakers of the divine nature; yea, one spirit, one
will, one love with Him, being in a sort deified, and enjoying as much of heaven here as mortality
is capable of.

8. To this purpose saith the same St. Bernard: Amor Dei, vel amor Deus, Spiritus Sanctus amori
hominis se infundens, afficit eum sibi, et amans semetipsum de homine Deus, secum unum efficit
et spiritum ejus, et amorem ejus; that is, The love of God, or love which is God, to wit, the Holy
Ghost pouring himself into the love of man (inclineth and) applieth man by love unto Himself; and
thus God, loving Himself by man, maketh both his spirit and love one with Himself.

9. A most blessed state this is certainly, being the portion chosen by Mary, which our Lord
Himself calls optimam partem, the very best of all divine graces which God can bestow in this life;
and wherewith He enriched in a singular manner those His two most highly favoured and most
tenderly loved friends, St. John the Evangelist, and St. Mary Magdalen; but in a yet more
supereminent degree His own most heavenly Virgin-Mother.

10. Happy, therefore, are those souls upon which God bestows a desire and ambition so glorious
as seriously and effectually to tend, aspire, and endeavour the compassing a design so heavenly:
qualifying them not only with good natural propensions to those internal ways of love leading to
this end, but also calling them to a state of life abstracted from the world, the vanities and solicitudes
of it; and with all supernatural light to direct them in the secret paths of this love; and lastly, strong
resolutions, and perseverance with courage to break through all discouragements, difficulties,
persecutions, aridities, and whatsoever oppositions shall be made against them either from
concupiscence within, or the world without, or the devil joining with both against a design of all
others most hurtful to him and most destructive to his pretensions.

11. And for a yet further and greater encouragement unto them to embrace and prosecute so
glorious a design, they may take notice that, besides this (hitherto described) happy union of a
contemplative soul with God by perfect charity, in the which the soul herself actively concurs, not
only as to the fruition, but also in the disposing herself immediately thereto, there are other unions

entirely supernatural, not at all procured, or so much as intended by the soul herself, but graciously
and freely conferred by God upon some souls, in the which He, after a wonderful and inconceivable
manner, affords them interior illuminations and touches, yet far more efficacious and divine: in all
which the soul is a mere patient, and only suffers God to work His divine pleasure in her, being
neither able to further nor hinder it; the which unions, though they last but even as it were a moment
of time, yet do more illuminate and purify the soul than many years spent in active exercises of
spiritual prayer or mortification could do." The Ven. Father F. Augustine Baker