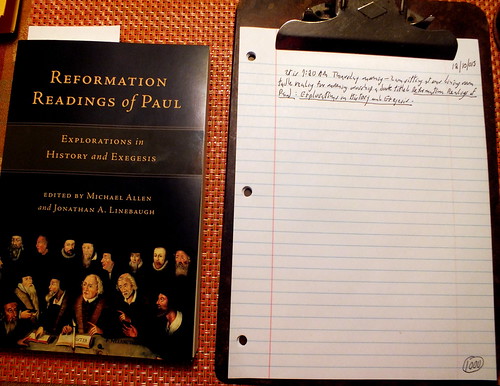 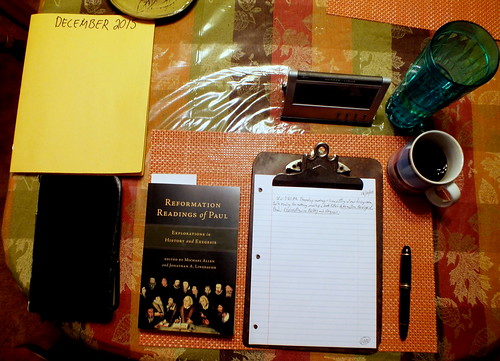 It is in the flow of existence here by Lake Michigan 1:11 PM Thursday afternoon. Thus far I have had an average day.

I got up this morning around 6:15 AM. Once again weird disturbing dreams drove me out of my warm cozy bed. I got up made myself a small pot of oatmeal (one cup of oats and half a cup of water). I ate my oatmeal messing with our main computer. After breakfast and messing with our main computer I wrote in my paper diary. Today I hit One Thousand pages in my 2015 Diary. I am right on schedule this year. I usually write a thousand pages a year. I use to write more when I copied off what I wrote here and put it with my regular written pages. I stopped doing that a couple of years ago because I realized I tend to write the same things year after year. I am sowing the seed of the Gospel of God. "For we are to God the fragrance of Christ among those who are being saved and among those who are perishing. To the one we are the aroma of death leading to death, and the other the aroma of life leading to life. And who is sufficient for these things? For we are not, as so many peddling the word of God; but as of sincerity, but as from God, we speak in the sight of God in Christ" 2 Corinth. 2:15-17.

I read for the devotions this morning from a book titled, "Reformation Readings of Paul: Explorations in History and Exegesis" Edited By Michael Allen & Jonathan A. Linebaugh. Carol got home from work around 9 o'clock AM. I was making a fresh pot of coffee when she got home. A friend of Carol's stopped by this morning to drop off Christ Mass goodies and to have a cup of coffee. Carol has been friends with this woman before we were married/they went to Nursing School together.

After Carol went to bed I left to visit thrift stores in search of Used Books to ADD to our library. I found these used books this morning-

"Pilgrim's Progress" by John Bunyan (I collect editions of this Puritan spiritual classic.)

"The Ecological Indian: Myth and History" by Shepard Krech III

"Obsessive Genius: The Inner World of Marie Currie" biography by Barbara Goldsmith (I have another book by Goldsmith in our library titled, "Other Powers: The Age of Suffrage, Spiritualism, and the Scandalous Victoria Woodhull".)

"Chronicle Of A Death Foretold" novel by Gabriel Garcia Marquez

"Emperor Of The Air: Stories" by Ethan Canin

"Freddy And Fredericka" a novel by Mark Helprin

"What Is What: The Autobiography Of Valentino Achak Deng" a novel by Dave Eggers

"Heat and Other Stories" by Joyce Carol Oates

"Aloft" a novel by Chang-rae Lee

"The Ten-Year Nap" a novel by Meg Woltzer

"Walden And Civil Disobedience" by Henry David Thoreau (I collect editions of this American classic.)

"A Partisan's Daughter" a novel by Louis De Bernieres

"Swann's Way" a novel by Marcel Proust (I collect different editions of this novel-this edition is a Penguin Deluxe Classic edition.)

"What If: The World's Foremost Military Historians Imagine What Might Have Been" essays by Stephen E. Ambrose, John Keegan, David McCullough, James M. McPherson Edited by Robert Cowley

I was going to visit one more thrift store but I was hungry so I came home to drift through the rest of the day. Not much else to report. Last night I basically read the novel "The Good Apprentice" by Iris Murdoch late into the night.

I will close to write in my diary and read my books. Existence keeps speeding by.