It is in the flow of life 11:58 AM late Friday morning. It has been thus far a normal day for me. I can see that the sun light is going to appear this afternoon. This morning it was gray and foggy outside.

I got up this morning around 6:15 AM. I got up and messed with our main computer. When my wife got up I made for us a pot of coffee and a pot of oatmeal for breakfast. After breakfast we went grocery shopping. Carol wanted to go grocery shopping before going to her yearly six month check-up at our dentist/her appointment was at 9:45 AM. So we went grocery shopping. When we were at a grocery store I realized my wife and I have been grocery shopping going on 37 years. I often how long Carol and I have together in this life. I know Carol and I will be together in Eternity/Heaven. The marriage union can not be broken by physical death. Marriage is an eternal covenant (Mark 10:9).

We were home from grocery shopping around 9:15 AM. We put away the groceries and Carol left for her dentist appointment. I wrote in my paper diary and then dozed till Carol got home around 10:30 AM.

I have not read anything this morning due to being extremely tired. I hardly slept last night.

Last night I read the memoir by Robert Jay Lifton titled, "Witness to an Extreme Century". Now it is another day. Carol goes back to work tonight. (I also read yesterday the novel, "The Mighty Walzer" by Howard Jacobson. While I read this novel I often find myself either softly laughing or quietly weeping.)

This afternoon around 2:30 PM I plan to leave the house for a giant used books sale here in Holland at the Holland Civic Center.

Well, I suppose I will close to drift to the music of the band The Black Dahlia Murder.

It is in the divine flow 6:22 PM Friday evening. I went to the annual AAUW Used Books Sale at the Holland Civic Center and here is a list of the used books I bought today for our library.

"Letters From The Editor: The New Yorker's Harold Ross Edited By Thomas Kunkel

"Exiled in Paris: Richard Wright, James Baldwin, Samuel Beckett, and Others on the Left Bank" literary biography by James Campbell

"Nirvana: The Biography" by Everett True

"Skeletons On The Zahara: A True Story Of Survival" by Dean King

"The Ascent Of Money: A Financial History of The World" by Niall Ferguson

"The Book Against God" A Novel by James Wood

"The Glass-Blowers" a novel by Daphne du Maurier

"Those Barren Leaves" a novel by Aldous Huxley

"Reamde" a novel by Neal Stephenson

"Mentor: A Memoir" by Tom Grimes

"The Palace Thief:Stories" by Ethan Canin

"Better Than Sex: Confessions Of A Political Junkie" by Hunter S. Thompson

"The Man in the Wooden Hat" a novel by Jane Gardam

The above books are the ones I got this afternoon for our library. I plan to go back tomorrow morning to the second day of this used books sale and search for more books before going to the library to volunteer at the book nook from 10 AM to 1 PM. I will close to gather my wits. 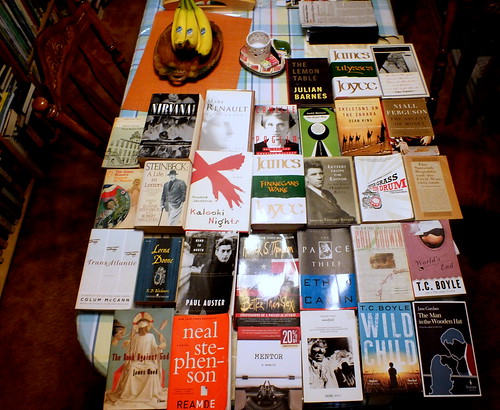