It is in the flow of It 9:13 AM Monday morning Eastern Standard Time. Outside this morning it is gray and warm/humid. I still have on our central air system so as to keep my cage cool. The shades are down so it is dark in my cell. I like a dark cold cell as I wait for the final countdown.

Last night I did nothing but sit and read my books. I read from these books last night before going to bed.

"The View From Castle Rock" Stories by Alice Munro

I went to bed around 10 o'clock PM and now it is another day to make sure I make it to the finish line.

Last night Carol called me. Also last night our son Josiah called to see how his father was doing/Joe knows his mother is down in Arizona helping out Beth/his sister during the birth of his niece Margaret Carol. (does this make sense?)

So my morning goes by normal. Well I suppose I will close to drift. No way out of the cage.

When it comes to describing reality for me I turn to the Bible. The Bible describes perfectly my view of living in this insane messed up world. All I see around me is absolute madness.

"[1] Wherefore seeing we also are compassed about with so great a cloud of witnesses, let us lay aside every weight, and the sin which doth so easily beset us, and let us run with patience the race that is set before us,
[2] Looking unto Jesus the author and finisher of our faith; who for the joy that was set before him endured the cross, despising the shame, and is set down at the right hand of the throne of God.
[3] For consider him that endured such contradiction of sinners against himself, lest ye be wearied and faint in your minds.
[4] Ye have not yet resisted unto blood, striving against sin." Hebrews 12:1-4 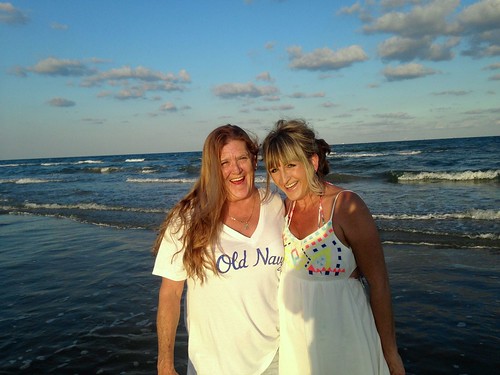 It is in the flow of existence 12:14 PM Monday afternoon. Rudy and I left the house this morning to put gas in the car and to see what thrift stores were open on this 2015 Labor Day. The Goodwill thrift store was closed, but Salvation Army thrift store was opened having a super sale/the parking lot was packed with cars. I looked at their used books but found nothing so I left to take Rudy for a walk at Dutton Park. It is a gray hot humid day. On the way home from walking Rudy I stopped at Burger King to get food.

Not much else to report so I will close to wait it out. 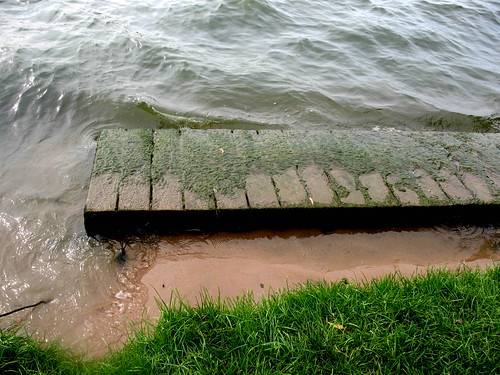 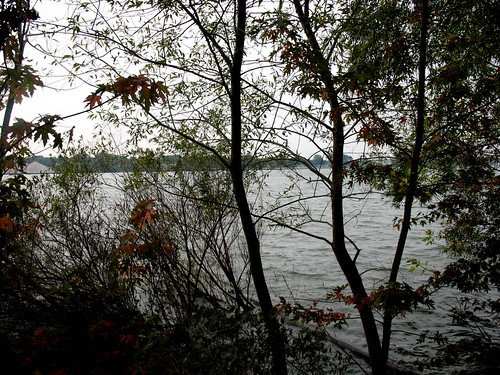 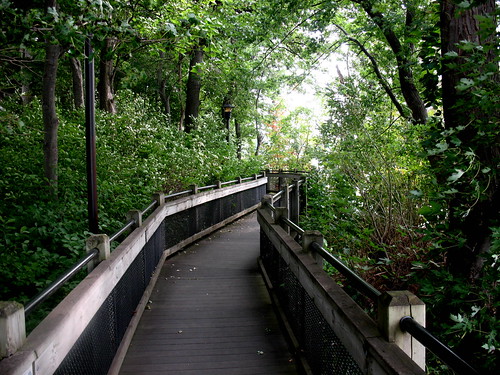 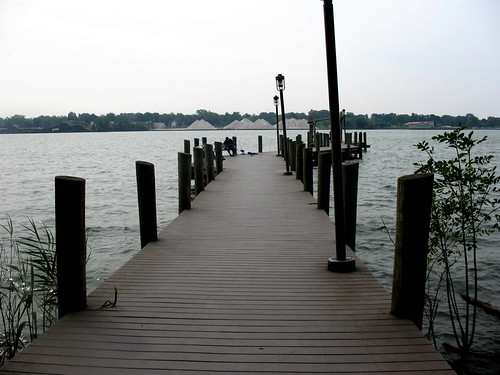 It is in the flow 3:47 PM Monday afternoon. I was reading this afternoon a book I mentioned earlier today titled, "The View From Castle Rock" Stories by Alice Munro. I read this from this book today (in the first stories in this book Munro writes about her Scottish ancestors)-

"Will's sighting would certainly not stand well with the Kirk, and during the first part of the eighteenth century the Kirk was particularly powerful in the parish of Ettrick.

Its minister at that time was the preacher Thomas Boston, who is remembered now-if he is remembered at all-as the author of a book called Human Nature in its Fourfold State, which was said to stand next to the Bible on the shelf of every pious home in Scotland. And every Presbyterian home in Scotland was meant to be a pious home. Constant investigation of private life and tortured reshapings of the faith went on to take care of that. There was no balm of ritual, no elegance of ceremony. Prayer was not only formal but personal, agonized. The readiness of the soul for eternal life was always in doubt and danger.

Thomas Boston kept this drama going without a break, for himself and for his parishioners. In his autobiography he speaks of his own recurring miseries, his dry spells, his sense of unworthiness and dullness even in the act of preaching the Gospel, or while praying in his study. He pleads for grace. He bares his breast to Heaven-at least symbolically-in his desperation. He would surely lacerate himself with thorned whips if such behavior would not be Popish, would not in fact constitute a further sin.

Sometimes God hears him, sometimes not. His cravings for God can never leave him, but he can never count on its being satisfied. He can rise up filled with the Spirit and enter marathons of preaching, he presides at solemn festivals of Communion in which he knows himself to be the Vessel of God and witnesses the transformation of many souls. But he is careful not to take the credit himself. He knows that he is all too capable of the Sin of Pride, and knows too how swiftly Grace may be withdrawn from him. . ." pg. 14,15 Alice Munro

When I read the above I went down in the lower level and brought up my set of the COMPLETE WORKS OF THOMAS BOSTON 12 Volumes. When we were in Bible College back in the late 1970's I bought this set of the Complete Works of Thomas Boston (reprinted in 1980). Many years ago one of the first books I read when coming into the Reformed Faith (Calvinism) was Thomas Boston's book "Human Nature in its Fourfold State". I have not read Boston in awhile. As I have mentioned here before for several years I was into Scottish Theology/when I was at Reformed Theological Seminary I even took a class on Scottish Theology.

How many Christians in the world own a set of the COMPLETE WORKS OF THOMAS BOSTON. How many of my readers have read Boston's Works? 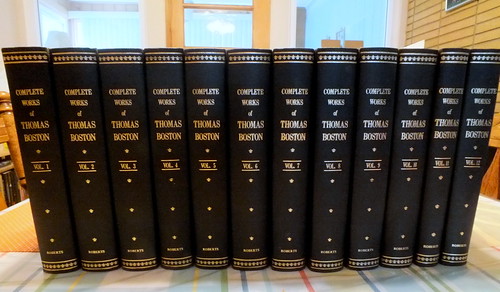 It is now in the flow of this day 4:39 PM Monday late afternoon. I am down in the lower level because I put away my set of The Complete Works of Thomas Boston. I am not in the right place spiritually to read 18th century Scottish Reformed Spirituality. To be honest I am out of It. I am wandering the waste places these days. I do not know what to read as a Christian these days. I have a huge Christian library which is buried in dust down here. As I was putting away Boston's Works my eye caught a book I have often looked at in my wanderings titled, "Instructions about Heartwork: What is to be done on God's part and our for the cure and keeping of the heart, that we may live in the exercise and growth of grace here, and have a comfortable assurance of glory to eternity" by that eminent gospel minister Mr. Richard Alleine (with a preface by Dr. Samuel Annesley) Edited by Dr. Don Kistler retypeset from the second edition published in London in 1684/reprint 2003 Soli Deo Gloria Publications.

"Our evil hearts will hinder us from doing good to ourselves, or receiving or laying up good for ourselves. Romans 7:19: "The good that I would. I do not." Why, what hinders? See verse 21: "I find a law," the law of sin in the heart. When I would do good evil is present with me. Galatians 5:17: "The flesh lusteth against the spirit, so that we cannot do the things that we would." Some times good counsel is given from the Lord, but we do not take it. How many good counsels have your heard from the ministry of the Word that are lost and forgotten and come to nothing? Sometimes a good motion comes into the heart to repent and mend our ways; to pray or to meditate, or to search our hearts to cease from this earth and flesh; from serving our sense, and minding only the present, and to lay up treasure in heaven, and provide for the time to come. Do you never have such motions? Do you never hear such a voice within you, "Get goods that do not grow old, a treasure in heaven that does not fail?" Choose the good part; lay hold of eternal Life; give yourself to praying; keep a good conscience; take heed and beware of covetousness; use more diligence; live with more heedfulness; have your conversation in heaven, and keep yourself unspotted by the world; keep yourself in the love of God; set the Lord always before your eyes; behold His face in righteousness; "study to shew thy self approved unto God," and to walk so that in all things you may be accepted by God.

Do not such motions as these come into your hearts? You who are Christians, surely you have many such good motions, but do they take? What do they bring forth? If you had obeyed all the good motions that you have sometimes felt within you, oh, what manner of Christians would you have been! What mortified, what circumspect, what raised and heavenly-minded Christians would you have been! But how do the good motions take? What success are they attended with? Do you not see that they are often strangled in their birth, and die and come to just nothing? Or at least do you not merely halt and trifle in the pursuit of them? If you pray, or hear, or set your hearts to humble yourselves before the Lord, how you are distracted, diverted, and deadened, and all your duties spoiled in doing them, so that you can have little comfort or real advantage by what you do. Do you not often mourn over your prayers, sermons, and sabbaths, as merely lost to you? You would work upon your hearts heavenward and fix them above; you would love and delight yourselves in the Lord, and solace yourselves in the contemplation of the divine love and goodness; you would fain set your hearts to live such a godly, consciencious, circumspect, self-denying life. Then comfort yourselves with such thoughts: "I hope I shall never live such a careless, carnal, useless, unsavory, earthly life again." I hope you have many such thoughts, desires, hopes, and aims (you are lamentable Christians if you do not). . ." pg. 138-140 Richard Alleine (1611-1691) 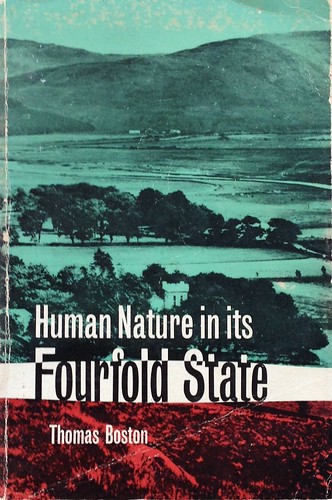 "Human Nature in its Fourfold State" by Thomas Boston
http://gracegems.org/28/human_nature.htm

I think I read Boston's treatise "Human Nature in its Fourfold State" Banner of Truth paperback edition in 1975 Richmond California. I first read Boston's Works at Pacific School of Religion, Berkeley California in their library. Back in those days when I was not working at the Richmond Rescue Mission I would take a bus to Berkeley and visit the Pacific School of Religion library and read 17th and 18th century editions/writings of the English Puritans and Scottish Presbyterian gospel ministers/Thomas Boston.