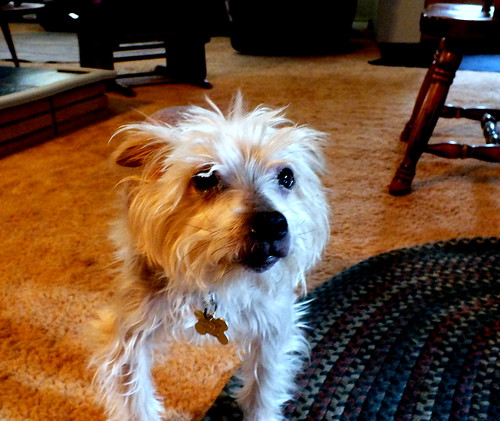 It is in the flow 6:36 AM Friday morning. I got up around 5:45 AM this morning. I got up because I was having weird dreams and my arms were hurting me. I think I slept on my left arm too long during the night and now it hurts. It would be horrible to be in pain for eternity someplace totally dark.

I got up and made myself a cup of tea and a bowl of oatmeal. I ate my oatmeal messing with our main computer. I might go back to bed sometime this morning. I have to keep reminding myself that Carol is not coming home this morning. Carol is away for two weeks. I am alone for two weeks, which maybe is good for me. Once again it would be horrible to be alone for eternity down in a dark pit filled with fire. "And shall cut him asunder, and appoint him his portion with the hypocrites: there shall be weeping and gnashing of teeth." Matt. 24:51

I do not know what I will do today to keep myself awake. It is suppose to be another hot humid day here in West Michigan.

Last night I basically wandered the house and watched a little college football. I went to bed early last night.

Well I suppose I will close to write in my paper diary. I have been mainly reading these days "Anti-Oedipus Capitalism and Schizophrenia" by Gilles Deleuze and Felix Guattari.

"[42] Watch therefore: for ye know not what hour your Lord doth come.
[43] But know this, that if the goodman of the house had known in what watch the thief would come, he would have watched, and would not have suffered his house to be broken up.
[44] Therefore be ye also ready: for in such an hour as ye think not the Son of man cometh.
[45] Who then is a faithful and wise servant, whom his lord hath made ruler over his household, to give them meat in due season?
[46] Blessed is that servant, whom his lord when he cometh shall find so doing.
[47] Verily I say unto you, That he shall make him ruler over all his goods.
[48] But and if that evil servant shall say in his heart, My lord delayeth his coming;
[49] And shall begin to smite his fellowservants, and to eat and drink with the drunken;
[50] The lord of that servant shall come in a day when he looketh not for him, and in an hour that he is not aware of,
[51] And shall cut him asunder, and appoint him his portion with the hypocrites: there shall be weeping and gnashing of teeth." The Gospel of Matthew 24:42-51

This morning our mail came early I suppose because it is Labor Day weekend. I received in the mail a memoir I had ordered titled, "Larceny In My Blood: A Memoir of Heroin, Handcuffs, and Higher Education" by Matthew Parker. I ordered this memoir thinking/believing this Parker had written a book I recently heard about titled, "Willoughbyland: England's Lost Colony". Also I had read in Amazon that Parker had written several other books like, "The Sugar Barons: Family, Corruption, Empire, and War in the West Indies" and "Panama Fever: The Epic Story of the Building of the Panama Canal". I thought to myself when I read that Parker had written a memoir with the titled, "Larceny In My Blood" that he had really come a long way from being a heroin addict to being a successful writer. But to my dismal I discovered this morning there are two writers with the name Matthew Parker. One Parker is an American who has only written this memoir and an another Parker who is British that has written several non-fiction books. There is also a music artist named Matthew Parker.

The Matthew Parker who wrote the memoir, "Larceny In My Blood" has written nothing but this memoir. I also found out this morning that this memoir is a comic book! And not a serious work of literature. I only paid seventy-six cents for this comic book plus postage, but still I was a little disappointed to discover I had not bought what I thought would be an interesting memoir of someone who had become a successful writer after being a drug addict for years.

But I am still impressed that Matthew Parker who wrote the memoir "Larceny In My Blood" had been able to overcome his drug addiction and went on to received a good education/higher education. I personally received a good education in spite of my background of poverty and existential despair. I am an educated Christian with a storehouse full of heavenly knowledge that no one wants. I am glad that now I am retired and can wait for death in a condition middle-class comfort. The Lord is good.

(I do not consider myself educated since I do not know how to write proper a sentence. I write listening to the words as I seek to write them out. If the sentence sounds smooth then I do not correct it. I am always going over my journals/blogs and rewriting stuff all the time. To me it would be blessing to be able to write like John Updike or Joyce Carol Oates. Instead I write like someone born in a housing project in Oakland California.) 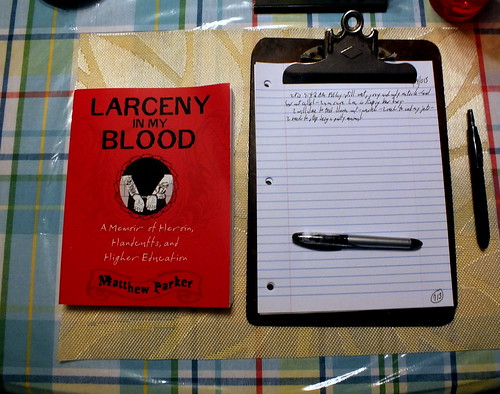 It is in the flow of existence Friday 1:25 PM Eastern Standard Time. I have been basically wandering in circles. I can’t seem to get into anything today. I suppose I am tired from It all. I should take a nap someplace in our cave.

I did leave the house late this morning to get a mailer and then to visit a thrift store near where we live. I found these used books this morning-

“Green” a novel by Frances Sherwood (I bought this novel for twenty-five cents. I have another book by Sherwood in our library titled, "The Book of Splendor". This novel titled "Green" grabbed my attention because she mentions Allen Ginsberg and Jack Kerouac. The novel looks like a coming of age novel that takes place in California in the late 1950's.)

“All The Pretty Horses” a novel by Cormac McCarthy (I already have this novel in our book collection. I bought this paperback to sell someday.)

“A Prayer For Owen Meany” a novel by John Irving (A first edition hardback with nice cover for fifty cents.)

I read many years ago “A Prayer For Owen Meany” by Irving. When we lived in Texas back in the 1980’s I went through a phrase where I read several novels by John Irving over a period of several months. I have not read any of Irving’s recent novels, even though I collect them for our library.

Well I suppose I will close to drift.

This afternoon I have been reading in Amazon descriptions of books written by the German philosopher Peter Sloterdijk.