What Was I Saying?
Do you ever talk out loud to yourself? What do you say? Why do you think you do this?
Reply 35
I am always talking to myself, because most of the time there is no way to talk to. I usually say "I do not want to exist anymore," but then I tell myself "I have to exist because it is the will of God." Why do I tell myself daily I do not want to exist, because I want to live a life that glorifies God. What does just existing serve in the end? I want a life that is rich in meaning. 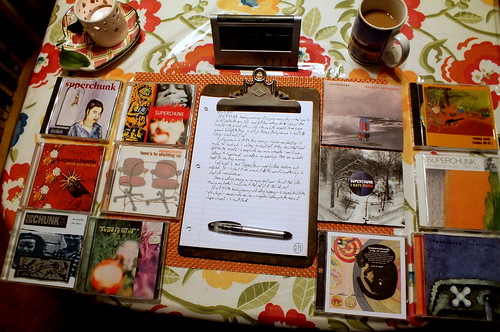 It is in the flow of life 9:19 AM Monday morning. A dreary rainy day here in West Michigan. Maybe the rain will go away today and the sun will once again appear in the sky.

I got up around 6:30 AM this morning. Carol was already up sitting in the living room blowing her nose. Carol has a cold and is not feeling well this week. I pray I do not get sick. I hate being sick in a sick world. Carol left this morning for a six hour class at the hospital/ACLS Advance Cardiac Life Support renew her license class. She had to go to the class even though she was sick because her ACLS license expires the end of this month.

I have done nothing thus today but talk to myself and listen to the music of Superchunk. I am out of it. My brain is not functioning. I am tired.

Last night I read the novel "Zeroville" by Steve Erickson and watched a little TV. I went to bed around 11:20 PM. Now it is another day.

Well I will close to feel at a loss.

I have been meaning to write that the other day a LJ friend asked me what kind of body Christians would have in the Eternal State/the new creation. In answering this question I quoted from First Corinthians chapter 15 "The first man was of the earth, made of dust; the second Man is the Lord from heaven. As was the man of dust, so also are those who are made of dust; and as is the heavenly Man, so also are those who are heavenly. And as we have borne the image of the man of dust, we shall also bear the image of the heavenly Man" I Corinth. 15:47-49.

I thought also of quoting these verses from the First Epistle of John, "Beloved, now we are children of God; and it has not yet been revealed what we shall be, but we know that when He is revealed, we shall be like Him, for we shall see Him as He is. And everyone who has this hope in Him purifies himself, just as He is pure" 1 JN 3:2,3.

Several weeks ago I was reading a two volume work titled, "The Mystical Evolution in the Development and Vitality of the Church" by Fr. John G. Arintero, O.P.. In these volumes Fr. Arintero writes about the glorification of the saints/the spiritual espousals. I will quote from John Ruusbroec "The Spiritual Espousals"

"You shall know that the heavenly Father, as a living ground and with all that lives in him, has turned actively toward his Son as toward his own eternal wisdom, and that this same wisdom, together with all that lives in it, has actively turned back toward the Father, that is, toward the same ground from which it comes forth. In this meeting between the Father and the Son there rises the third Person, the Holy Spirit, who is the love of them both and who is one with them in the same nature. In a way characterized by both activity and blissful enjoyment, the Spirit embraces and penetrates the Father and the Son and all that lives in both of them with such great riches and joy that all creatures must remain silent before this, for the incomprehensible wonder which resides in this love eternally transcends the understanding of all creatures. But when a person understands this wonder and savors it without amazement, then has his spirit been raised above itself and been made one with the Spirit of God; it savors and sees-without measure, like God himself-the riches which it has itself become in the Unity of the living ground where it possesses itself in accordance with the mode of its uncreated bring.

Now this blessed meeting is actively renewed in us without ceasing in accordance with God's own mode of being, for the Father gives himself to the Son and the Son to the Father in an eternal sense of well-being and a loving embrace. This is constantly renewed in the bond of love, for just as the Father ceaselessly sees all things anew in the birth of the Son, so too are all things anew by the Father and the Son in the flowing forth of the Holy Spirit. This is the active meeting of the Father and the Son, in which we are lovingly embraced by means of the Holy Spirit in eternal love.

Now this active meeting and this loving embrace are in their ground blissful and devoid of particular form, for the fathomless, modeless being of God is so dark and so devoid of particular form that it encompasses within itself all the divine modes and the activity and properties of the Persons in the rich embrace of the essential Unity; it thereby produces a divine state of blissful enjoyment in this abyss of the ineffable. Here there is a blissful crossing over and a self-transcending immersion into a state of essential bareness, where all the divine names and modes and all the living ideas which are reflected in the mirror of divine truth all pass away into simple ineffability, without mode and without reason. In this fathomless abyss of simplicity all things are encompassed in a state of blissful blessedness, while the ground itself remains completely uncomprehended, unless it be through the essential Unity. Before this the Persons must give way, together with all that lives in God, for here there is nothing other than an eternal state of rest in a blissful embrace of loving immersion.

This is that modeless being which all fervent interior spirits have chosen above all things, that dark stillness in which all lovers lose their way. But if we could prepare ourselves through virtue in the ways I have shown, we would at once strip ourselves of our bodies and flow into the wild waves of the Sea, from which no creature could ever draw us back.

That we might blissfully possess the essential Unity and clearly contemplate the Unity in the Trinity-may the divine love grant us this, for it turns no beggar away. Amen. Amen." pg. 150-152 John Ruusbroec "The Spiritual Espousals" [The Classics Of Western Spirituality]

It is in the flow 6 o'clock PM Monday evening. Another day has gone by in the history books. I spent the day wandering the house and reading volume one "The Mystical Evolution" by Fr. John G. Arintero. I do not know why I have been reading Catholic Theology all day. I suppose I got tired of reading secular literature/burnt out on post-modernist literature. Also I am tired mentally. If I am mentally tired I decided to read something contemplative/something to get me into the Bible. I do not agree with everything Fr. Arintero writes in his two volume work "The Mystical Evolution in the Development and Vitality of the Church". This evening I came across something written by Fr. Arintero that I totally disagree with/his view of the operation of divine grace. I do not believe this statement by Fr. Arintero to be biblical-

""Eternal life," as the Council of Trent teaches, "is to be offered, both as a grace mercifully promised to the sons of God through Christ Jesus, and as a reward promised by God Himself, to be faithfully given to their good works and merits. For this is the crown of justice which after his fight and course the Apostle declared was laid up for him, to be rendered to him by the just Judge, and not only to him, but also to all that love His coming." As St. Augustine says, "He who created thee without thyself, will not save thee without thyself."

We are, then obliged to cooperate in our justification and sanctification because God wishes to reward our merits by crowning His own grace, that is, the power which He communicates to us to perform good works. When we receive the divine grace of His Son, we receive it as a most precious seed of life which we must foster and not let perish. We began the life of grace in the status of new-born babes who crave pure spiritual milk, that by it they may grow to salvation, which is the statue of perfect manhood. We must grow and develop in total conformity with Jesus Christ, and that to such an extent that He Himself is formed anew in us. If, on the other hand, we do not strive to grow, we shall perish, because we shall be contradicting the plans of divine Providence." pg. 196,197

Fr. Arintero sets forth a understanding of salvation that is not found in the New Testament/the Letters of the Apostle Paul. I could write pages refuting the above Catholic doctrine of grace, but I am too tired. Plus no one is going to read what I write anyway.

I recommend reading "The Mystical Evolution" by Fr. John G. Arintero along with a work titled, "John Calvin: Institutes of the Christian Religion" Two Volumes/Volume One BOOK Three The Way in Which We Receive the Grace of Christ: What Benefits Come to Us from It, and What Effects Follow.

I will close to wait for night to fall.
Collapse