It is 9:08 AM Friday morning here in the south section of Holland Michigan. It is 5 degrees below zero outside this morning. It is ugly bitter snow weather lately. No let up on this bad winter weather.

I got up this morning around 6:43 AM. I got up made a pot of coffee and messed with our main computer. I next decided to eat some old food found in our refrigerator for a morning meal. At this stage in the game it does not matter what I eat. Carol called from Arizona around 8 o'clock AM. Today is Carol's last day visiting Beth, Andy, and baby Lou. She flies into Grand Rapids tomorrow around 3:30 PM and should be home before nightfall. Carol will come back to my loving arms. After talking to my wife on the phone I fed the birds and shoveled some snow. When I came inside I wrote in my paper diary. Now I am writing in my blogs. I am thinking of going to get coffee beans this morning. I really do not want to go anywhere today.

Well not much else to report right now. Existence keeps decaying. This morning I ordered some books by Michael Houellebecq and Laurent Binet from Amazon. 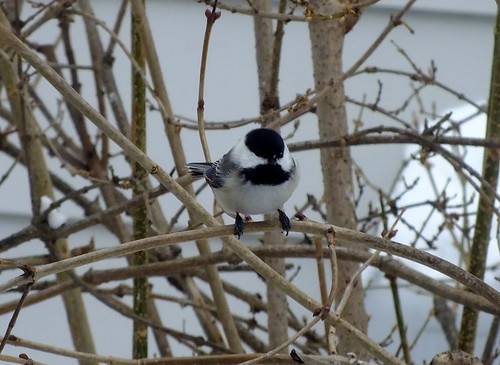 It is 11:28 AM late Friday morning. I left the house this morning to get coffee beans, a quart of milk so as to make corn bread today, visit Community Action House thrift store and to get a pizza for meals. Well I got the coffee beans, but the Mexican grocery store near where we live did not have quarts of milk just gallons. Since going on a diet I do not drink any milk so we do not buy gallons of milk any more because it will spoil. After looking for a milk and coming empty handed I went across the way from the store to Community Action House thrift store to look at their used books. I found these used books this morning to ADD to our book collection-

"Rule Of The Bone" a novel by Russell Bank

"Spook Country" a novel by Will Gibson

"Tree Of Smoke" a novel by Denis Johnson

"The Modern Mind: An Intellectual History of the 20th Century" by Peter Watson

After visiting Action House I drove downtown Holland to get large pizza to take home for meals. But when I got to the pizza place it was closed and would not open till 11 o'clock AM. The time was 10:43 AM and it was freezing cold sitting there in a empty parking lot so I decided to not get a pizza. I decided I would go to Burger King fast food down the street from where we live out our lives to get some fast food to keep me going. So I went to Burger King and got some fast food for two meals. After Burger King I came home to eat and wait for Spring time. So goes existence. The sun is out but it is 4 degrees below zero outside right now.

Well I close to wait for it to come to a close.

Peter Watson wrote a book titled, "The Age of Atheists: How We Have Sought to Live Since the Death of God". In this lecture Watson lectures on the rise of atheism in the modern era.

It is 4:48 PM Friday evening here in ice land. I have been wandering the house so as not to fall asleep. I could drink another cup of coffee, but maybe later. I need to clean the house before Carol gets home tomorrow. I am not one to do any intensive house cleaning. I will clean our main bathroom, mop the kitchen floors and vacuum the living room before Carol arrives from visiting the West.

When not wandering in circles I have been reading a book titled, "The Modern Mind: An Intellectual History of the 20th Century" by Peter Watson.

One of the used books I picked up this morning was by the American writer Denis Johnson titled, "Tree Of Smoke". I already had this novel by Denis Johnson, but my copy is a hardback and this one is a used paperback. I am right now writing in my main study. I have these books by Denis Johnson near me. I will list the books I have by Denis Johnston as to keep myself from falling asleep-

"Tree Of Smoke" a novel by Denis Johnson

"Nobody Move" a novel by Denis Johnson

"Seek Reports From The Beyond America & Beyond" by Denis Johnson

"Angels" a novel by Denis Johnson

"The Veil" Poems by Denis Johnson

"The Stars At Noon" a novel by Denis Johnson

"Fiskadoro" a novel by Denis Johnson

"Resuscitation of A Hanged Man" a novel by Denis Johnson

I think Denis Johnson has a new novel out that is not in our library yet. I am hoping to find it used someday.

So existence keeps floating by like a giant block of ice. I suppose I will close to wander. I am not going anywhere in this ice storm.

"Third sense in which the twentieth century is different scientifically from earlier eras lies in the realm of psychology. As Roger Smith has pointed out, the twentieth century was a psychological age, in which the self became privatised and the public realm-the crucial realm of political action on behalf of the public good-was left relatively vacant. Man looked inside himself in ways he hadn't been able to before. The decline of formal religion and the rise of individualism made the century feel differently from earlier ones." pg. 3 Peter Watson
Collapse