It is 10:10 AM Friday morning in the flow of snow and ice. Outside there is blowing a bad snow storm. There is a ton of snow everywhere in the dead world.

I am still not in the mood to communicate. It all seems pointless. All one can do is wait it out. In time Spring will come.

I got up this morning around 7:33 AM. My wife was already up watching the BBC News on TV and reading newspapers. I made a pot of coffee and then messed with my lap top computer in my study. Not much else to report. We are snowed in today. Out street is impassable.

Last night we watched television. I went to bed alone last night. Now it is another day to seek salvation in Christ Jesus.

Well I will close to watch the birds. Carol is going to make a pot of soup this morning.

This morning as I looked out my study window I spotted once again our neighborhood hawk looking around for food. The hawk perched on a tree branch for over 30 minutes so I was able to take a lot of pictures of him. I also shot a short video of this hawk. 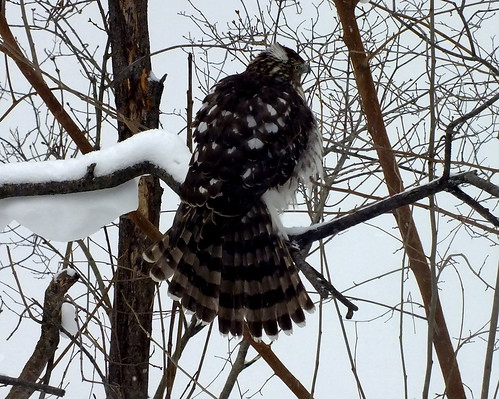 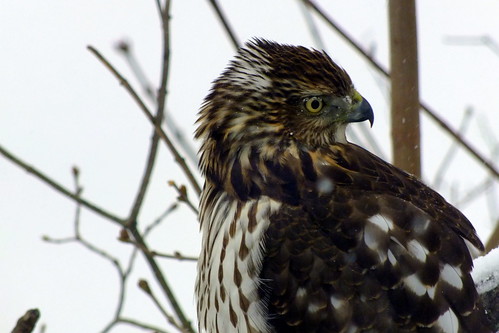 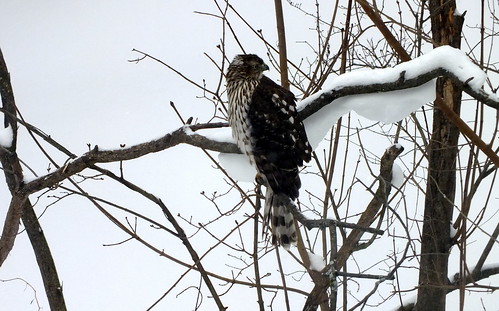 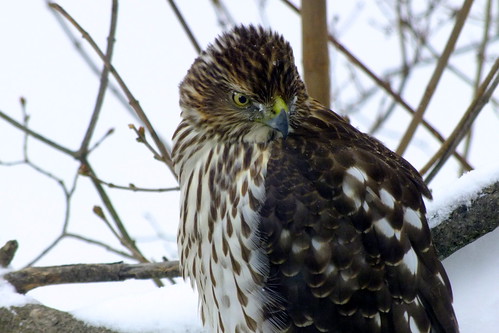 "The Father and the Son and Believers Will Indwell One Another

"Abide in me, and I in you. As, the branch cannot bear fruit by itself, unless it abides in the vine, neither can you unless you abide in me. I am the vine; you are the branches. Whoever abides in me and I in him, he it is that bears much fruit, for apart from me you can do nothing." John 15:4-5

Because of the Father's love for the Son and their love for the world, and because of the Son's incarnation, death, and resurrection, believers will be in the Father and the Son. Amazing as it sounds, believers will mutually indwell the Trinitarian persons as an act of grace insofar as creatures can partake of the divine life. David Crump's words are pointed: "Mutually indwelling the life of God is the heart and the soul of John's understanding of salvation. . . Every believer's inclusion within the exchange of divine life and the love between the Father and the Son is the essence, the heart and the soul, of his message about eternal life."

John includes the Holy Spirit in the mission of God. Jesus will ask the Father to send the Spirit to indwell and be with believers, and they will know him (JN 14:17). Although John does not correlate the Spirit's work and union with Christ, as does Paul, John provides the raw materials for systematic theology to do so." pg. 70,71 Robert A. Peterson "Salvation Applied By The Spirit: Union with Christ"

This afternoon in looking at lists of the best non-fiction books of the Year 2014 I discovered that the musician singer songwriter Bruce Cockburn published a memoir. I found this interview with Bruce Cockburn and watched some of it on YouTube.

Years ago when we lived in Mississippi and Texas I listened to the music of Bruce Cockburn all the time. Back in those days I listened to music on cassettes played on a boom box. I remember listening to Bruce Cockburn driving to preaching assignments at small country churches in the deep South while we were students at Reformed Theological Seminary, Jackson Miss... When we first moved here to Holland Michigan I saw Bruce Cockburn in concert at Calvin College in Grand Rapids MI. I do not remember right now why I stopped listening to Cockburn's music. All I have of Cockburn's music is on one vinyl record and on seven cassette tapes. My tape player is not working so all my music on cassettes sits in a closet these days. I do not remember if I have any music by Bruce Cockburn on CD in our music library.

"The Trouble With Normal" vinyl record 1983 (I bought this record in Jackson Miss. by mistake. At the time we had no record player. I have this record on display in my main study presently along with records by Patti Smith.)

Bruce Cockburn "Nothing But A Burning Light" 1991