Last night Caleb, Emily, and Josie arrived around 8:30 PM. I took some pictures of Caleb (our oldest son) with his baby daughter Josephine Joy last night. 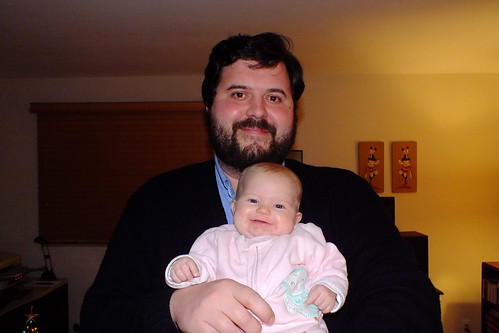 It is 7:58 AM Friday morning in the flow of existence. I am writing on my lap top in my main study. Caleb, Carol and Josie are in the living room. Emily left to shadow the people she will be working with in Grand Rapids MI.. Caleb and Emily already have an appointment to look at a house to rent when they move to Grand Rapids in four weeks. It would be cool if they like this house and have a place immediately to move into. The house is in a nice neighborhood in Grand Rapids. When Carol and I were newly married we lived in Grand Rapids. I was going to Reformed Bible College and Carol was working as a nurse. Our sons Caleb Jon and Josiah were born in Grand Rapids MI.. When Josiah was a baby we moved to Jackson Mississippi so we could attend Reformed Theological Seminary. Our daughter Bethany Taylor was born while we were at RTS, Jackson Miss..

I got up this morning around 5:45 AM. Carol took care of Josie during the night. Caleb and Emily slept down in the lower level.

Carol and I skyped Andy, Bethany, and Lousia last night before the arrival of Caleb, Emily, and Josie. We received a phone call from Josiah while we were all in the living room setting up Amazon Prime on our Smart TV. Joe and his wife Hannah live in the state of Washington. Joe and Hannah are spending the Christmas holy days with his wife's kinfolk. Right now it looks like Joe and Hannah will come here during Spring break next year. Carol plans this Summer 2015 to fly out and visit with Joe and Hannah in Washington. In February Carol plans to fly to Arizona and visit with Beth, Andy and Lou. I am afraid of flying in airplanes so I will stay home in contemplative silence before the Lord Jesus Christ.

This morning after making coffee I wrote in my paper diary and held Josie for awhile. I got out these books to read this morning if I can focus my brain-

"Reading Backwards: Figural Christology and the Fourfold Gospel Witness" by Richard B. Hays

Well I will close to face the new day. Existence keeps zooming by!

"9. For there is no physical nature to form an obstacle to spiritual nature, so God talks to the holy angels by the very same act through which he shows them his invisible and hidden reality in their hearts. In other words, they understand what they ought to do in their act of contemplation of truth; the very joy they experience in contemplation is a kind of vocal command. The inspired vision becomes a word that is heard. And so when God inspired in their hearts an oracle of vengeance against human pride, he said, "Come, let us go down there and confuse their language." His faithful ones are told, "Come." For the act of never leaving the contemplation of God, means, indeed, always growing in that contemplation; the heart that never forsakes him is in a state of constant movement toward him, always coming. And so he tells them, "Let us go down there and confuse their language." The angels go up in the act of severely repressing the creatures who are arrogating to themselves what does not belong to them. Therefore, to say "Let us go down there and confuse their language" is to show the angels in their hearts what should really be done; the power of their interior vision inspires their minds to perform an act of judgment by hidden ways.
10. The angels speak to God in a different way, as we are told in the Apocalypse of Saint John: they say, "Worthy is the Lamb who was slain to receive power, divinity, and wisdom." For the voice of the angels raised in praise of the Creator is, in fact, the wonder of interior contemplation. Having become speechless before the miracles of the power of God means that one has said that one's heart has experienced emotions with reverence, and the sound of these voices is loud to the ears of the unembodied spirit. This voice is, as it were, made up of individual words, although it is formed from innumerable kinds of wonder. Therefore, God speaks to the angels when he reveals his will to their deepest selves in contemplation. The angels, on the other hand, speak to God when, contemplating what is above them, they rise up in the act of wonder." pg. 125, 126 Gregory the Great "Moral Reflections on the Book of Job" Volume 1 "Preface and Books 1-5" 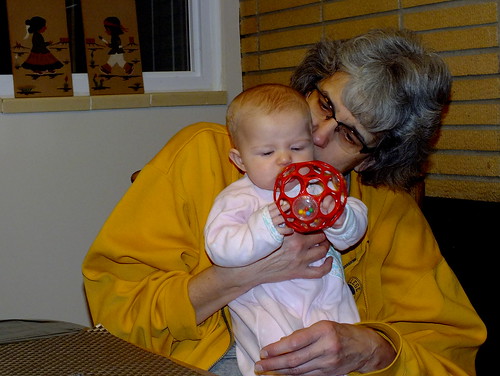 "The eventual success of Tertullian's formula was possible because it translated Hebew (biblical) thought into categories that the Gentile world could recognize and accept. From the beginning, the church had been faced with the competing claim of two very different worldviews, one which it had inherited from the Old Testament and the other which it had to address as part of its evangelistic mission. Its long-term aim was to persuade the Gentile world to accept the Hebraic way of looking at the universe, but that could not be accomplished until that world had been converted to Christ. In order to achieve that, the church had to speak to Gentiles in a way they could understand, giving new meaning to familiar words and reshaping the way those words were used so as to make them conform to the teaching and thought world of the Jewish Scriptures.

In the process, biblical concepts (like the eternity of God) that had been assumed rather than expressly stated, and Gentile vocabulary (like "substance") that had never been precisely defined, fused into the new discipline of systematic Christian theology. Words that had been long been in common use became technical terms to describe a God whose being and acts could be known, sometimes with great precision, not by analysis of an inert object but by participation in a living relationship with him. From beginning to end, it was the objective reality of the biblical God that determined how the vocabulary used to describe him would be developed and understood. The suitability of any particular term would be decided not by the way it was used in everyday life (or in ancient Greek philosophy) but by the degree to which it could be applied to the character of the living God who revealed himself in Scripture.

It is 2:37 PM Friday afternoon in the flow. I left the house this afternoon to visit thrift stores in search of used books to add to our small town library. I found these used books today-

"Report To Creco" a memoir by Nikos Kazantzakis

"Fear And Loathing In Las Vegas: A Savage Journey To The Heart Of The American Dream" by Hunter S. Thompson

When I got home I found Caleb wandering around the house, Carol sleeping and Josie sleeping. I ate lunch and now I am writing these words. I will close to drift into the coming darkness.
Collapse