It is 10:11 AM Wednesday morning in the flow of world history. Outside it is cold rainy dark and pure ugly. At least it is not snowing this morning. Maybe we will make it through the month of December without seeing any significant snow fall.

I got up this morning around 6:05 AM. I made a pot of coffee and then messed with my lap top in my main study. The world is in a terrible mess. "And because of lawlessness will abound, the love of many will grow cold. But he who endures to the end shall be saved. And this gospel of the kingdom will be preached in all the world as a witness to all nations, and then the end will come" Matthew 24:12-14.

After messing with my lap top I made myself a small pot of oatmeal for breakfast. After breakfast I wrote in my paper diary and got out these books to read for devotions-

"Salvation Applied By The Spirit: Union with Christ" by Robert A. Peterson

"God Has Spoken: A History Of Christian Theology" by Gerald Bray

Carol got home from work around 8:30 AM this morning. She has gone to bed for the day. She wanted me to make for her two spinach quiches for her to take to work tonight, so I did that. Now I am sitting in my main study talking to myself as usual.

I have no plans for the day ahead of me. I will read my books and reflect on the birth of the Messiah the Savior of sinners the Lord Jesus Christ. "Let this mind be in you which was also in Christ Jesus, who being in the form of God, did not consider it robbery to be equal with God, but made Himself of no reputation taking the form of a bondservant, and coming in the likeness of men. And being found in appearance as a man, He humbled Himself and became obedient to the point of death, even the death of the cross. Therefore God also has highly exalted Him and given Him the name which is above every name, that at the name of Jesus every knee should bow, of those in heaven, and of those on earth, and of those under the earth, and that every tongue should confess that Jesus Christ is Lord, to the glory of God the Father" Phil 2:5-11.

Well I will close to face it. 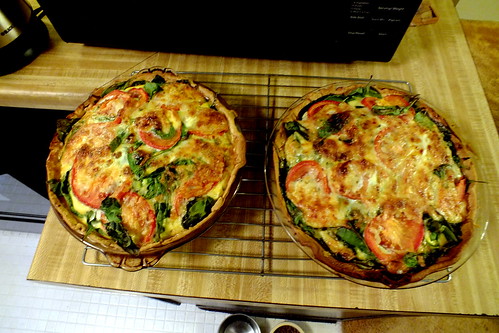 Picture perfect
What's the last thing you took a picture of? Did you use a phone or an actual camera?
Reply 29
The last picture I took with a camera was two spinach quiches. If you want to see this photo I posted it in my LJ blog.

It is in the flow today 12:47 PM Wednesday afternoon. I has been super quiet around here. I have been basically wandering the house and reading from a book titled, "Salvation Applied By The Spirit: Union with Christ" by Robert A. Peterson. Not much else to report. I am waiting to see what comes in the mail. Earlier today the postman delivered a package from our son Josiah and his wife Hannah. I will let Carol open the package since she will not get any presents this year. She told the kids not to get us anything but to give to their favorite charity. Carol and I buy what we want throughout the year. I have everything I want when it comes to material things. "Now godliness with contentment is great gain. For we brought nothing into this world, and it is certain we can carry nothing out. And having food and clothing with these we shall be content" 1 Tim. 6:6-8.

I will close with a quote from the above book, "Salvation Applied By The Spirit: Union with Christ"-

"Jesus continues to speak of the same wonderful reality-this time expressed as the Father's and the Son's dwelling with believers-by using a different figure of speech. In John 14:1-3 he spoke of his preceding the disciples to heaven to prepare rooms for them in the Father's heavenly house. Now he returns to the image of a home but this time uses it of his and the Father's coming to the disciples to make their home with them on earth: "If anyone loves me, he will keep my word, and my Father will love him, and we will come to him and make our home with him" (v.23). Brown correctly states, "Here it ["dwelling place"] is used for the indwelling of the Father and the Son with the believer." And Kostenberger is right: "This is the only place in the NT where the Father and the Son are both said to indwell believers."

It is important to see the differences between the uses of "home" imagery in John 14:1-6 and verse 23. In the former passage Jesus goes ahead of the disciples to heaven to prepare a place for them in God's house. In the latter passage, the Father and the Son come to make their home with believers on earth. Carson captures the significance for our study:

My Father will love him, and we will come to him and make our home. . .with him. Thus, while Jesus leaves his disciples in order to prepare in his Father's house "dwelling places" (cf.v.2) for his followers, he simultaneously joins with the Father. . . making a "dwelling place" in the believer. Presumably this manifestation of the Father and the Son in the life of the believer is through the Spirit, although the text does not explicitly say so. Other New Testament passages testify to the dwelling of the Son in the Christian (e.g., Eph.3:17); this is the only place where the Father and Son are linked in this task. . . This is an anticipation, an inauguration of the final, consummating experience of God.

When Jesus departs, he will not leave his disciples as orphans. He will send them the Spirit, whom they will know, who will indwell them and be in them (vv.16-18). In addition, he will not leave them "homeless." Instead, the Father and the Son will come to "make their home" with believers. Jesus, then, employs this "homey" figure to reinforce his teaching on union. When Jesus ascends to the Father, the two of them will indwell God's people so that believers will experience the "immediate presence of Deity." . . ." pg.62,63 Robert A. Peterson 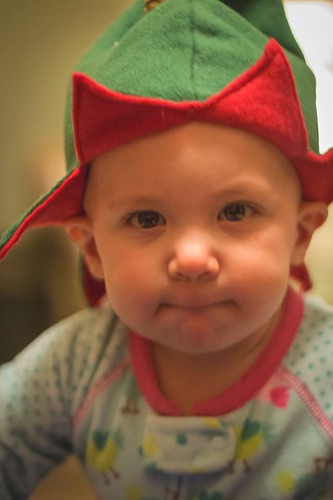 It is now in the flow of being in Union with Christ 8:38 PM Wednesday. I have been in my main study taking pictures of myself. I am getting bald. Sometimes I think about shaving all my hair off and being bald totally. I have had long hair since the dawn of time. I have had a beard since I was young. I hate seeing my face without a beard. I do not like to shave and I do not like getting my hair cut. I keep telling myself I am old man and some old men go bald so suck it up!

Emily our daughter-in-law called this evening to tell she got the job in Grand Rapids MI so they are all excited. They have four weeks to move from Boston Mass. to Grand Rapids MI.

I spent most of the late afternoon hours sitting in silence or reading a book titled, "God Has Spoken: A History Of Christian Theology" by Gerald Bray.

There is nothing on TV tonight worth watching so I will read my books till I get tired and probably go to bed early. Living is hard work. 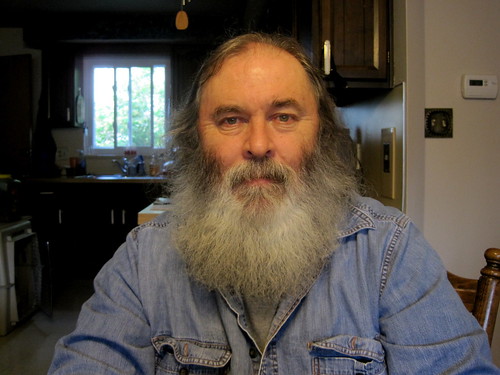 I took this picture of me this evening in my main study. I wonder if I look thinner in this photo compared to the photo I posted previously of me with my monk beard. 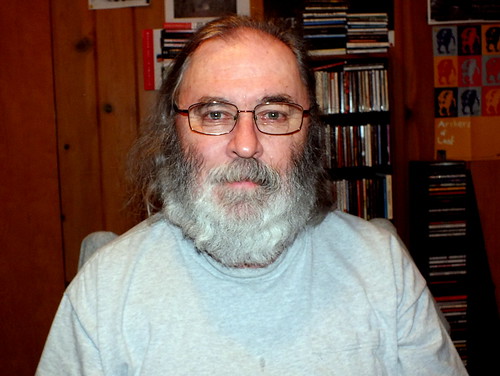 Rudy is wishing everyone a Merry Christmas and a blessed New Year! 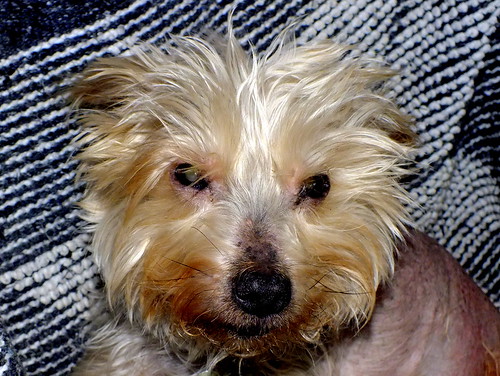