It is 9:40 AM Thursday morning in the flow of decay. It is raining and thundering this morning. I opened the windows this morning to hear the rain fall to the dirt.

I think I got up this morning around 6:35 AM. I made a pot of coffee and then messed with our main computer. I had a giant sweet roll with a cup of coffee for my morning meal. I am on a diet remember. If I don't lose ten pounds I could go blind says my doctor.

After messing with our main computer I wrote some crap in my paper diary. I then sat in our living room listening to the music of Blonde Redhead and the rain storm. Carol my wife called from Boston to see if I was still decaying. Emily has not had her baby yet. Carol said Emily has a doctor's appointment today. We will see what the doctor's has to say about the birth.

So the morning drips by normal. I did read a little of the treatise "On Contemplation" by Guigo De Ponte this morning. Last night I mainly read "Flaubert: A Biography" by Frederick Brown. I went to bed early last night. Now it is a rainy Thursday morning.

I plan to sit in the dark all day waiting it out.

Yesterday after my friend Tim and I visited Pier Cove Beach we drove down the road along Lake Michigan and visited West Side County Park to eat a picnic lunch. 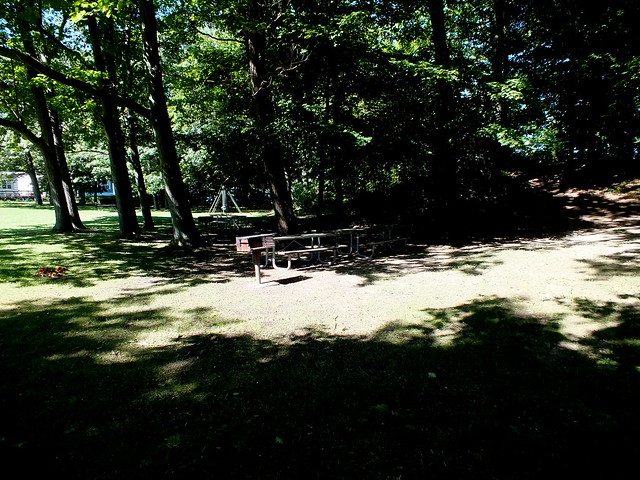 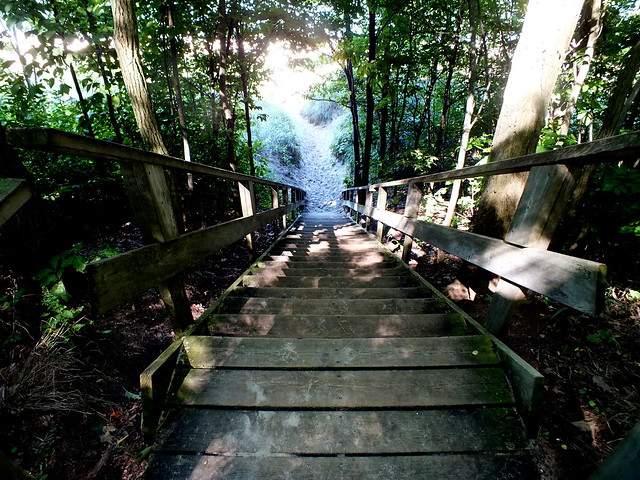 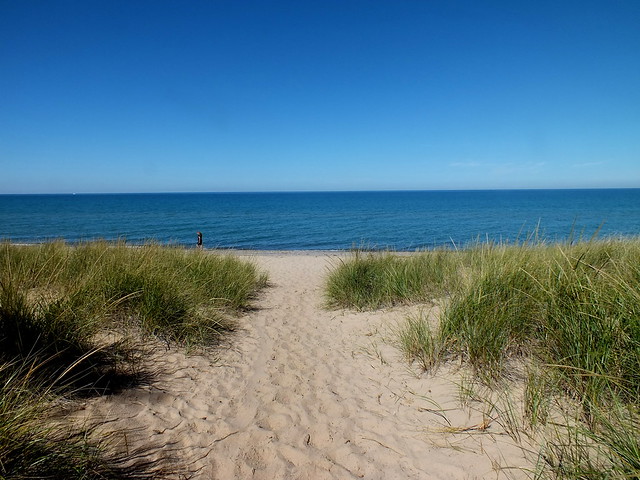 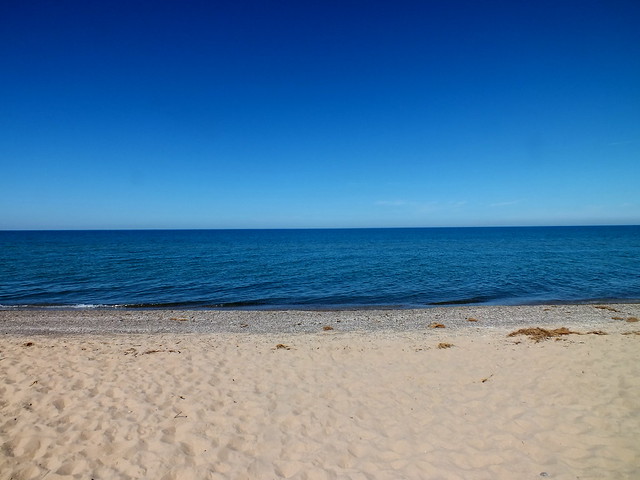 It is now in the flow here in West Michigan 10:35 AM Thursday morning. I am down in the lower level writing on my old lap top. I opened one of the basement windows so I could smell wet earth rain.

Carol called this morning from Boston to check up on me. Still no birth there in Boston Mass.. Emily has a doctor's appointment today so we will see what the doctor says.

On the phone talking to my wife I repeated bits and pieces of what Tim and I talked about yesterday. Not much was really said but before we parted we had a small discussion on communication. Tim goes to the same church my wife goes to. Tim's background is totally different from the members of Covenant PCA. Anyway I won't go into telling you about Tim's past just to say he told me he goes to Covenant PCA because he finds some of the people interesting. So I said you do not go to church to communicate to the people at Covenant PCA. I told Tim I seriously doubt if people wake up Sunday morning saying to themselves I am really going to communicate today at church. People talk to one another but it is mostly a bunch of bullshit. No one is listening just a bunch of chatter coming out their mouths. I told Tim as I look over my life I think maybe I have really communicated to someone rarely. In the Past I talked to people but never really opened up myself and spoke from my Real Self. I do not think I really started communicating till recently. It has only been the last couple of years that I have felt free to be me in all my brokenness. In the past there were always walls between me and other people. Why communicate to someone when they will not listen or hear what you are saying? I told my wife this morning that when I am with Tim I can say anything and he won't blink an eye. It is like here in LiveJournal I can be myself and if people do not read my words I am not going to feel rejected or misunderstood. I am not writing to win friends. I am writing to be true to my inner heart voice. What I find weird is that there are people in LiveJournal who pride themselves on being broad minded but hate evangelical Christianity. These people who think there are so loving and spiritual hate the teachings of the Bible. These people have no tolerance for me because I seek to be true to the teachings of the Bible. And all I want to do is communicate the Truth in a spirit of love. Weird. What some people want is to communicate only to people who have no love for the Lord Jesus Christ but who like feeling all warm inside with some ghost-like spirituality.

I told Carol over the phone this morning that I know for a fact people find me boring. I know my blog is boring. But that is because I am being truthful. Why play the false game that life is one big joy ride? What is exciting is dying and going home to be with the Lord Jesus Christ. Everything is decaying. I remember these words of the apostle Paul, "Therefore we do not lose heart. Even though our outward man is perishing, yet the inward man is being renewed day by day. For our light affliction, which is but for a moment, is working for us a far more exceeding and eternal weight of glory, while we do not look at the things which are seen, but at the things which are not seen. For the things which are seen are temporary, but the things which are not seen are eternal. For we know that if our earthly house, this tent, is destroyed, we have a building from God, a house not made with hands, eternal in the heavens. For in this we groan, earnestly desiring to be clothed with our habitation which is from heaven" 2 Corinth. 4:16-5:1,2.

I know right now in my life I can look people in the eye and speak with love and truthfulness. I am not being deceitful or scared when I speak to people (or write in my blogs). I am now clear as glass when I communicate. I have nothing to hide or be ashamed of. I have no ax to grind. I am hear to give love to a dying race.

Well I suppose I will close to listen to the rain fall.

It is 12:08 PM Thursday afternoon. I thought I would quote from the 13th century treatise "On Contemplation" by Guigo De Ponte since it goes along with my thoughts on true biblical Christianity in contrast to New Age spirituality or Cosmic Jesus spirituality.

"Chapter Two: The Many Reasons Why This Spiritual Life Is Highly Desired.

There are many reasons why a life of recalling Christ's life ought to be a sinful man's greatest longing. First, because of the forgiveness of his sins-for when he has passed judgment on himself, accusing himself in confession and justice and freely accepting his penance, he is so clean and free of the filth of sin that he walks attentively with God and meditates in the aforementioned manner. God is a consuming fire to those who cling to him, purging their sins.

Second, this life is desirable because of illumination, for the one who comes to his aid is a light shining in darkness. Illumined by his light, one is taught to set proper priorities-to place Christ and heavenly things first, followed by oneself, one's neighbor, and earthly things.

Third, this life is longed for on account of the grace of tears so necessary for a sinner in this valley of misery, a grace which Christ, the fountain of gardens and well of living waters (Ca 4:15), like to give to sinners who cling closely to him. For Christ is the one who calls out: If anyone thirsts, let him come to me and drink, and out of his belly shall flow rivers of living water (Jn 7:37-38). But let the faithful sinner maintains a true and eternal goal in view no matter what he does, lest he take hold of a merely transitory reward in the tears that come from time to time.

Fourth, this life is desirable as a renewal after sinful lapses in daily matters. For the Lord raises from failure those who steadfastly cling to him, as the Scripture says: Make a bronze serpent and set it up as a sign; anyone who has been bitten, if he looks at it, shall live (Nm 21:8; cf. Jn 3:14).

Fifth, this life is desired for its sweet, pleasant, and much-sought-after taste, as the Psalmist says: Taste and see that the Lord is sweet (Ps 33:9 [34:8]); as the Canticle of Canticles declares: Under the shadow of him whom I desired I saw down and his fruit was sweet to my mouth (Ca 2:3); and as the Canticle proclaims: Your name is as oil poured out (Ca 1:2). In all these ways his name is the soul's desire. The more the faithful sinner is inwardly renewed day-by-day, so much more eagerly he adores and cultivates again and again the life of his Savior, as it is said: They that eat me shall still hunger and they that drink me shall still thirst (Sir 24:29)[21]). The soul's eagerness has no end so long as the Savior's sweetness keeps condensing into dewdrops for her.

Sixth, this life is desirable because it brings knowledge of fatherly majesty, knowledge which can be had only through Christ, as the Scripture says: No one knows the Father except the Son and he to whom the Son reveals him (Mt. 11:27).

Seventh, it is desirable because it makes departure from this dangerous life safe and free of anxiety. For the faithful sinner who in this life gives Christ daily hospitality in his heart, making up from sweet meditations a verdant couch for Christ-the faithful sinner, who, at night on his bed, seeks him whom his soul loves-such a one, in turn, will be sought and received by Christ after death that he might have in eternity what he craved, wished for, and became accustomed to in this life: to be with Christ." pg. 198,199 Guigo De Ponte
Collapse