It is 10:28 AM Sunday morning in the flow of existence. It is a sunny autumn morning here by Lake Michigan. The trees are turning color and the days are getting shorter.

I am down in the lower level drinking coffee and reading Mystical Theology for morning worship. Carol went to Covenant PCA this morning. Beth and Louisa are upstairs. This afternoon Carol, Beth and Lou are driving over to Grand Rapids to visit with Andy's mother.

So the morning has gone by. I am tired as usual. We went to bed early last night. I plan to take a nap this afternoon.

I have been mainly reading these days a book titled, "Up In The Old Hotel" short stories by Joseph Michell.

Well I will close with a quote from, "The Roads To Zion Mourn" by Hugh of Balma.

"50. Having said that true love reposes in that union of love that unites to the One who is subject to nothing, we must discuss how it is that reason finds truth only in him. But because we are here assuming the viewpoint that true enlightenment is the result of love, we must discuss how the will finds full satisfaction in him and him alone when the wayfarer living in this present life arrives at happy union with him. (This will be described at greater length later.) Although the spirit ought not rest in anything less noble than herself and although earthly consolation or fleshly delight are not enough for her, still, sometimes she busies herself with such things, which is contrary to her natural urge toward God. This is lamentable because every true delight stills the yearning or striving of the person hungry for it, whereas earthly things, no matter how sweet one might think them, after a time leave a famished and completely restless appetite behind, as is obvious in all sensory things. Therefor the appetite's urges never find repose in earthly pleasures. What then should our human spirit do? She needs to end up with the one thing that can speed her way to present union with the only One she discovered to be better than herself, the One who alone conceals within himself the treasury of rejoicing. When she finds this treasure through experiential knowledge, she for joy thereof goes and sells all she has and buys the field(Mat 13:44)." pg. 126 Hugh of Balma

Louisa Mae in our old highchair 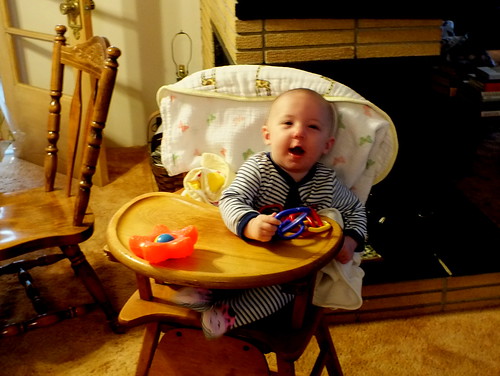 It is 5:28 PM Sunday evening in the flow of existence. I had a normal day. Today I mainly wandered the house trying to stay cool and reading a book titled, "Up In The Old Hotel" short stories by Joseph Mitchell. Carol, Beth and baby Lou were gone most of the afternoon.

I want to quote from a short story titled 'Professor Sea Gull' written by Joseph Mitchell. I like the words in this quote-descriptive language. The main character of this short story is name Gould. Gould considers himself last of the bohemians. Gould spends his days doing nothing, but he does spend hours writing each day what he has titled, "An Oral History of Our Time". In the following quote is a description of what Gould writes in his Oral History.

"Gould puts into the Oral History only things he has seen or heard. At least half of it is made up of conversations taken down verbatim or summarized; hence the title. "What people say is history," Gould says. "What we used to think was history-kings and queens, treaties, inventions, big battles, beheadings, Caesar, Napoleon, Pontius Pilate, Columbus, William Jennings Bryan-is only formal history and largely false. I'll put down the informal history of the shirt-sleeved multitude-what they had to say about their jobs, love affairs, vittles, sprees, scrapes, and sorrows-or I'll perish in the attempt." The Oral History is a great hodgepodge and kitchen midden of hearsay, a repository of jabber, an ommium -gatherum of bushwa, gab, palaver, hogwash, flapdoodle, and malarkey, the fruit, according to Gould's estimate, of more than twenty thousand conversations. In it are the hopelessly incoherent biographies of hundreds of bums, accounts of the wanderings of seamen encountered in South Street barrooms, grisly descriptions of hospital and clinic experiences ("Did you ever have a painful operation or disease?" is one of the first questions that Gould, fountain pen and composition book in hand, asks a person he has just met), summaries of innumerable Union Square and Columbus Circle harangues, testimonies given by converts at Salvation Army street meetings and the added opinions of scores of park-bench oracles and gin-mill savants. For a time Gould haunted the all-night greasy spoons in the vicinity of Bellevue Hospital, eavesdropping on tired internes, nurses, orderlies, ambulance drivers, embalming-school students, and morgue workers, and faithfully recording their talk. He scurries up and down Fifth Avenue during parades, feverishly taking notes. Gould writes with great candor and the percentage of obscenity in the Oral History is high. He has a chapter called "Examples of the So-called Dirty Story of Our Time," to which he makes almost daily additions. In another chapter are many rhymes and observations which he found scribbled on the walls of subway washrooms. He believes that these scribblings are as truly historical as the strategy of General Robert E. Lee. Hundreds of thousands of words are devoted to the drunken behavior and the sexual adventures of various professional Greenwich Villagers in the twenties. There are hundreds of reports of ginny Village parties, including gossip about the guests and faithful reports of their arguments on such subjects as reincarnation, birth control, free love, psychoanalysis, Christian Science, Swedenborgianism, vegetarianism, alcoholism, and different political and art isms. "I have fully covered what might be termed the intellectual underground of my time," Gould says. There are detailed descriptions of night life in scores of Village drinking and eating places, some of which, such as the Little Quakeress, the Original Julius, the Troubadour Tavern, the Samovar, Hubert's Cafeteria, Sam Swartz's T.N.T., and Eli Greifer's Last Outpost of Bohemia Tea Shoppe, do not exist any longer. . ." pg. 57-59 Joseph Mitchell
Collapse