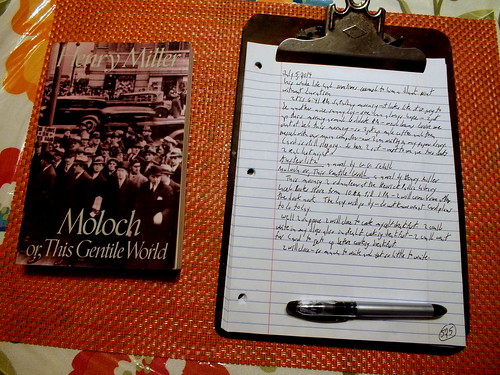 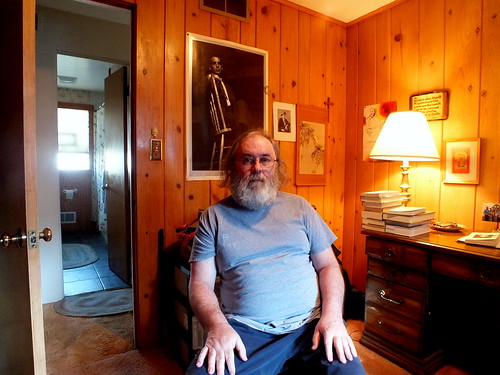 It is 2:13 PM Saturday afternoon. A cool gray afternoon here in West Michigan.

I volunteered at the Herrick Public Library used books store today from 10 AM till 1 o'clock PM. I had two people come in the store and buy something. I read while at the book nook a book titled, "The Great And Holy War: How World War I Became A Religious Crusade" by Philip Jenkins. I brought home these two used books to ADD to our library-

"Napoleon Bonaparte" biography by Alan Schom (I have in our library a book titled, "The History Of Napoleon Buonaparte" by John Gibson Lockhart.)

"Captain Sir Richard Francis Burton: The Secret Agent Who Made The Pilgrimage To Mecca, Discovered The Kama Sutra, And Brought The Arabian Nights To The West" by Edward Rice (I have another biography about Sir Richard Burton titled, "The Devil Drives: A Life of Sir Richard Burton" by Fawn M. Brodie.)

When I got home from the book nook this afternoon I ate lunch, wrote in my paper diary and talked to my wife.

Nothing wild came in the mail today. Well I am feeling wasted so I will close to drift.

It is now in the flow of my life span 9:20 PM Saturday night. I am down in the lower level where it is cold and dark. I came down here to lay in the dark and rest. It is too early to go to sleep so I decided to write in my blogs.

This afternoon besides wandering the house in a fog I read "Austerlitz" a novel by W. G. Sebald. I did read also a little from a book titled, "The Acts of the Risen Lord Jesus Luke's account of God's unfolding plan" by Alan J. Thompson [New Studies In Biblical Theology].

"The Power Of Myth" by Joseph Campbell With Bill Moyers

"The Masks Of God: Primitive Mythology" by Joseph Campbell

"The Masks of God: Occidental Mythology" by Joseph Campbell

"The Masks of God: Creative Mythology" by Joseph Campbell

"The Hero With A Thousand Faces" by Joseph Campbell

"A Fire in the Mind: The Life of Joseph Campbell" by Stephen and Robin Larsen

Also when I am at the library book nook sometimes I have the opportunity to share my faith in Christ Jesus. I do not go out of my way to present Christianity, just bring it up when seeking to make known to people where I am coming from intellectually and spiritually. I do see myself as being a Christian evangelist. The Lord Jesus is my life. I have received by sovereign free grace the gift of eternal life. We read in the Gospel of John "Do not labor for the food which perishes, but for the food which endures to everlasting life, which the Son of Man will give you, because God the Father has set His seal on Him" John 6:27.

I looked at this evening a commentary on the Gospel of John titled, "The Gospel Of John: A Commentary" by Frederick Dale Bruner. I wanted to see what Dr. Bruner had to say on John 3:16-21.

Last year I bought a book on the Gospel of John titled, "Johannine Discipleship as a Covenant Relationship" by Rekha M. Chennattu that I need to read in the future. Right now I am seeking to read several books on the New Testament book The Acts of the Apostles.

Well I could write all night since I am in the mood to spill my beans. But there is always tomorrow to write. I seek in my blog for the cumulative effect. Over time I hope to communicate something meaningful.

Today at the library book nook I had a conversation with a fellow about books. The fellow told me about a book titled, "A Quiet American: The Secret War of Varian Fry" by Andy Marino.

Below is a description of this book found in Amazon.

"The history of Varian Fry is perhaps one of the least known yet most extraordinary sagas of World War II. In the summer of 1940, following the defeat of France by Hitler's armies, Fry, an idealistic American journalist and classical scholar, arrived in the port city of Marseilles armed with only three thousand dollars and a list of two hundred names. Sent by the newly formed American Emergency Rescue Committee, Fry was charged with the task of finding many of this century's most famous artists and intellectuals and helping them escape from Nazi-occupied France.

With the help of a dedicated staff, Fry immediately established a legal French relief organization, the American Relief Center, as a front for his covert rescue operation. Using a variety of clandestine and sometimes illegal means, from raising funds on the black market and forging documents to smuggling refugees via secret mountain and sea routes, Fry was able to channel some two thousand endangered people out of France and to the relative safety of Portugal, North Africa, and the United States.

After more than thirteen months of tirelessly spiriting people away under the constant threat of arrest by the Gestapo, Fry was finally deported by the Vichy French government in September 1942 as an "undesirable alien" for protecting Jews and anti-Nazis. Forced to return to the United States, Fry died in 1967, tragically without ever receiving recognition for his work from his own government. Only posthumously has he been honored by the United States Holocaust Museum and Israel's Yad Vashem.

A Quiet American is a penetrating examination of the life of a genuine American hero whose courage, humanity, and ingenuity significantly changed the character of American culture."