It is 6:25 AM Tuesday morning in the flow. I got up at 6 o'clock AM and made a pot of coffee. I opened all the windows to let in the morning air. It is a wet gray humid morning here in West Michigan. I am down in the lower level of our home writing in my blogs. I want to quote something I read last night in the book "The Denial Of Death" by Ernest Becker that has been on my mind all night.

"In these ways, then, we understand that if the child were to give in to the overpowering character of reality and experience he would not be able with the kind of equanimity we need in our non-instinctive world. So one of the first things a child has to do is to learn to "abandon ecstasy," to do without awe, to leave fear and trembling behind. Only then can he act with a certain oblivious self-confidence, when he has naturalized his world. We say "naturalized" but we mean unnaturalized, falsified, with the truth obscured, the despair of the human condition hidden, a despair that the child glimpses in his night terrors and daytime phobias and neuroses. This despair he avoids by building defenses; and these defenses allow him to feel a basic sense of self-worth, of meaningfulness, of power. They allow him to feel that he controls his life and his death, that he really does live and act as a willful and free individual, that he has a unique and self-fashioned identity, that he is somebody-not just a trembling accident germinated on a hothouse planet that Carlyle for all time called a "hall of doom."

We called one's life style a vital lie, and now we can understand better why we said it was vital: it is a necessary and basic dishonesty about oneself and one's whole situation. This revelation is what the Freudian revolution in thought really ends up in and is the basic reason that we still strain against Freud. We don't want to admit that we are fundamentally dishonest about reality, that we do not really control our own lives. We don't want to admit that we do not stand alone, that we always rely on something that transcends us, some system of ideas and powers in which we are embedded and which support us. This power is not always obvious. It need not be overtly a god or openly a stronger person, but it can be the power of an all-absorbing activity, a passion, a dedication to a game, a way of life, that like a comfortable web keeps a person buoyed up and ignorant of himself, of the fact that he does not rest on his own center. All of us are driven to be supported in a self-forgetful way, ignorant of what energies we really draw on, of the kind of lie we have fashioned in order to live securely and serenely. Augustine was master analyst of this, as were Kierkegaard, Scheler, and Tillich in our day. The saw that man could strut and boast all he wanted, but that he really drew his "courage to be" from a god, a string of sexual conquests, a Big Brother, a flag, the proletariat, and the fetish of money and the size of a bank balance.

The defenses that form a person's character support a grand illusion, and when we grasp this we can understand the full drivenness of man. He is driven away from himself, from self-knowledge, self-reflection. He is driven toward things that support the lie of his character, his automatic equanimity. But he is also drawn precisely toward those things that make him anxious, as a way of skirting them masterfully, testing himself against them, controlling them by defying them. As Kierkegaard taught us, anxiety lures us on, becomes the spur of our energetic activity: we flirt with our own growth, but also dishonesty. This explains much of the friction in our lives. We enter symbiotic relationships in order to get the security we need , in order to get relief from our anxieties, our aloneness and helplessness; but these relationships also bind us, they enslave us even further because they support the lie we have fashioned. So we strain against them in order to be more free. The irony is that we do this straining uncritically, in a struggle within our own armor, as it were; and so we increase our drivenness, the second-hand quality of our struggle for freedom.

Even in our flirtations with anxiety we are unconscious of our motives. We seek stress, we push our own limits, but we do it with our screen against despair and not with despair itself. We do it with the stock market, with sports cars, with atomic missiles, with the success ladder in the corporation or the competition in the university. We do it in the prison of a dialogue with our own little family, by marrying against their wishes or choosing a way of life because they frown on it, and so on. Hence the complicated and second-hand quality of our entire drivenness. Even in our passions we are nursery children playing with toys that represent the real world. Even when these toys crash and cost us our lives or our sanity, we are cheated of the consolation that we were in the real world instead of the playpen of our fantasies. We still did not meet our doom on our own manly terms, in contest with objective reality. It is fateful and ironic how the lie we need in order to live dooms us to a life that is never really ours." Ernest Becker pg.55,56 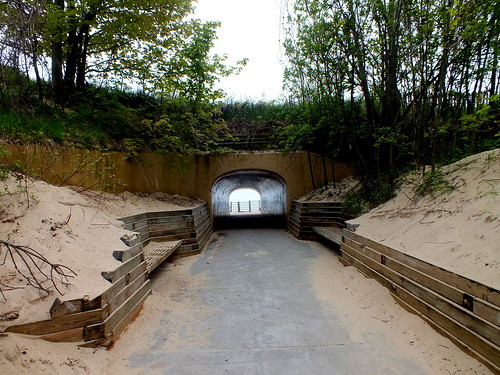 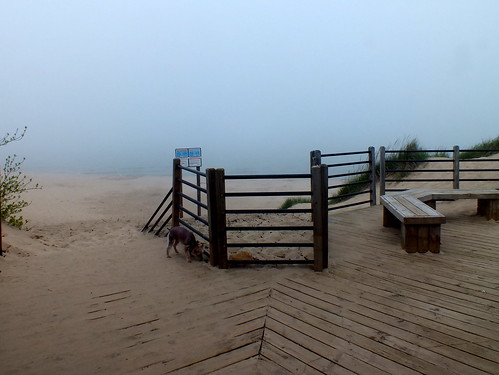 It is 1:10 PM Tuesday afternoon in the flow of existence. It is a gray cloudy humid day. We took Rudy out at Tunnel Park on Lake Michigan this morning and it was foggy. We could not see the Lake just a wall of fog. We might go out to the Lake tomorrow and drive up to Grand Haven for lunch. (Grand Haven is a city on Lake Michigan north of us.)

After walking at Tunnel Park we did some errands and visited thrift stores so I could look at used books. I found these used books today to ADD to our library.

"Checkpoint" a novel by Nicholson Baker

"The Road To Lichfield" a novel by Penelope Lively

"Treasures of Time" a novel by Penelope Lively

"Visitors" a novel by Anita Brookner

"Miles: The Autobiography" by Miles Davies with Quincy Troupe

Well more could be written but I am tired. I got up too early this morning. Maybe I will find some strength later in the day to enable me to write some more. Existence keeps on decaying. I keep on decaying.

My wife Carol and I standing on the shoreline of Lake Michigan. 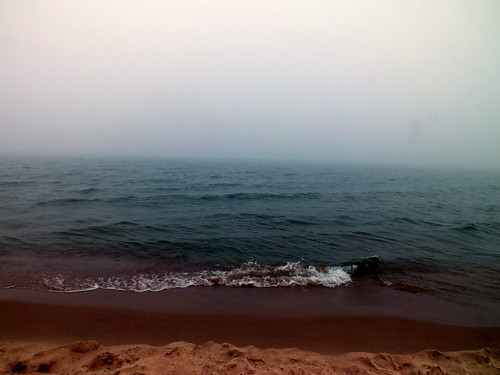 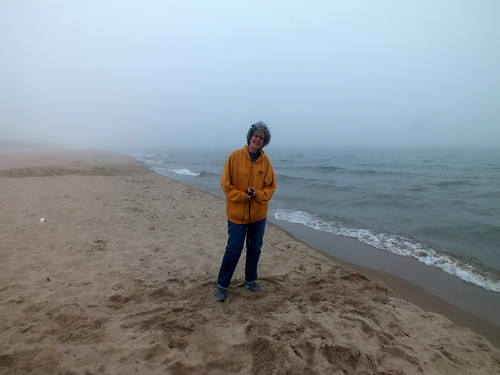 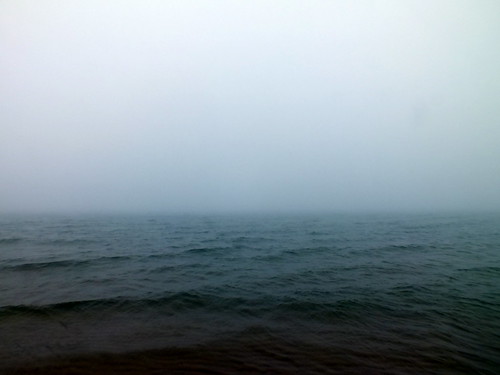 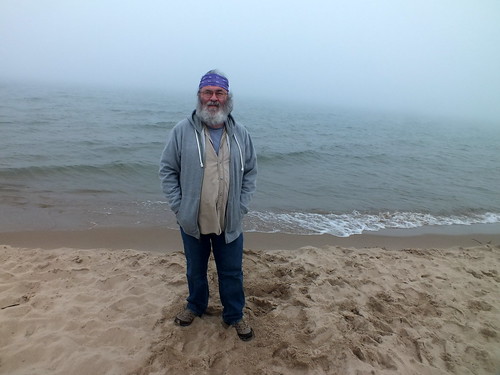