It is 10:06 AM Friday morning in the unfolding of the plan of God. Here in West Michigan it is raining. This nice warm rain has caused everything to turn green. By the time Tulip Time is over for another year all the tulips should be in full radiant bloom.

So it is another day in the life of Jonny Ray Keen. In three months I will be 62 years old. I got up this morning around 8 o'clock AM. I got up made a pot of coffee and then messed with our main computer. After messing with our main computer I cooked myself two eggs to put on a english muffin for breakfast. After I ate a meal I wrote in my paper diary. Carol got up around 9:10 AM and left to have coffee with an elderly woman from her church. I cleaned the kitchen and threw out old popcorn for the birds. I got out to read my Bible and a book titled, "The Acts of the Risen Lord Jesus: Luke's Account of God's Unfolding Plan" by Alan J. Thompson. What we see throughout the Acts of the Apostles is the acts of the Risen Lord Jesus. As a Christian we believe the Lord Jesus rose from the dead (the resurrection of Christ) and now is reigning from a throne of glory. We read in the Epistle to the Hebrews, "Now this is the main point of the things we are saying; We have such a High Priest, who is seated at the right hand of throne of the Majesty in the heavens, a Minister of the sanctuary and of the true tabernacle which the Lord erected, and not man." Hebrews 8:1,2; "For Christ has not entered the holy places made with hands, which are copies of the true, but into heaven itself, now to appear in the presence of God for us" Hebrews 9:24.

I know that the Lord Jesus is always praying for us His blood bought people. "For we do not have a High Priest who cannot sympathize with our weaknesses, but was in all points tempted as we are, yet without sin. Let us therefore come boldly to the throne of grace, that we may obtain mercy and find grace to help in time of need" Hebrews 4:15,16.

Last night I read "The Acts of the Risen Lord Jesus: Luke's Account Of God's Unfolding Plan" by Alan J. Thompson and watched television. Carol and I went to bed around 11:30 PM.

Well I will close to drift through the day. Read some more of the book, "The Acts of the Risen Lord Jesus" by Thompson. The Lord Jesus is coming back. We read in the first chapter of Acts, "And while they looked steadfastly toward heaven as He went up, behold, two men stood by them in white apparel, who also said, "Men of Galilee, why do you stand gazing up into heaven? This same Jesus, who was taken up from you into heaven, will so come in like manner as you saw Him go into heaven." Acts 1:10,11.

Lo, God to Heav’n ascendeth! Throughout its regions vast
With shouts triumphant blendeth the trumpet’s thrilling blast:
Sing praise to Christ the Lord; sing praise with exultation,
King of each heathen nation, the God of hosts adored!

From cross to throne ascending, we follow Christ on high
And know the pathway wending to mansions in the sky.
Our Lord is gone before; yet here He will not leave us,
And soon in Heav’n receive us and open wide the door.

Our place He is preparing; to Heav’n we, too, shall rise,
With Him His glory sharing, be where our treasure lies.
Bestir thyself, my soul! Where Jesus Christ has entered,
There let Thy hope be centered; press onward toward the goal.

Let all our thoughts be winging to where Thou didst ascend,
And let our hearts be singing: "We seek Thee, Christ, our friend,
Thee, God’s exalted Son, our life, and way to Heaven,
To whom all power is given, our joy and hope and crown."

This morning I saw a indigo bunting on our bird feeder. 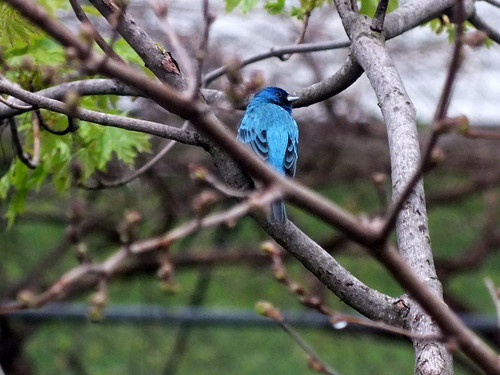 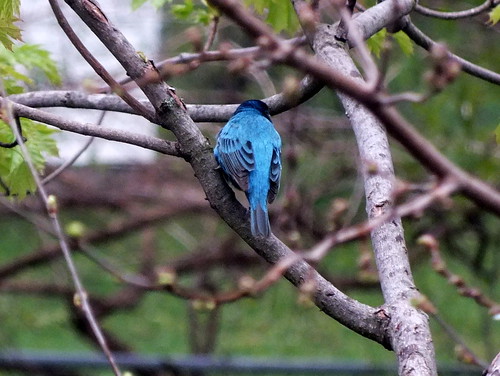 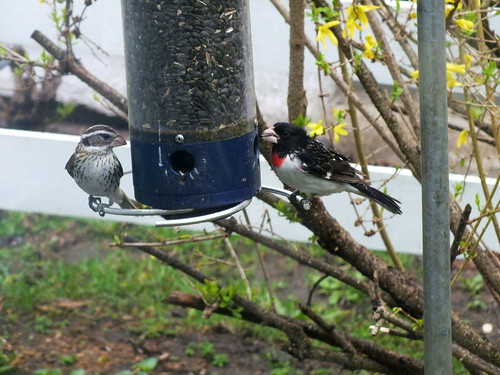 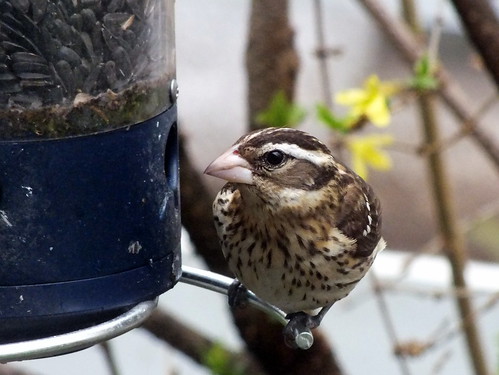 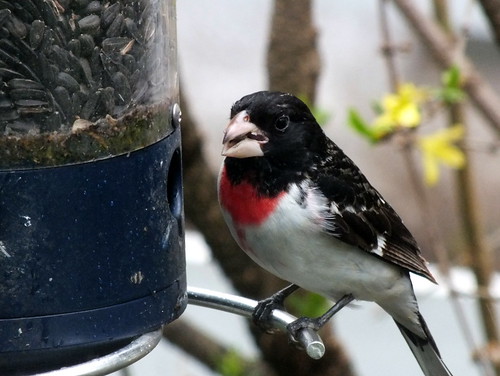 It is 5:59 PM Friday evening. I had a normal day. Not much happened today. It rained this morning, but then it cleared up this afternoon.

I did not go anywhere today. Carol goes into work at Midnight tonight. She is sleeping right now and wants to go grocery shopping this evening when she gets up. After grocery shopping she will go to work.

I mainly watched birds today and read my books. This evening I have been reading from a book titled, "The Glory of the Redeemer" by Octavius Winslow. This book by Winslow came to my mind when I read this verse in Acts chapter 1, "until the day in which He was taken up, after He through the Holy Spirit had given commandments to the apostles whom He had chosen" Acts 1:2. This verse states, "He [the Lord Jesus] was taken up," the Lord Jesus ascended into Heaven. In the book, "The Glory of the Redeemer" chapter VII is titled, THE GLORY OF THE REDEEMER IN HIS ASCENSION AND EXALTATION. I have been reading from chapter VI, THE GLORY OF THE REDEEMER IN HIS RESURRECTION. I will quote from this chapter in closing-

"And what, too, are all the supports of the believer in seasons of trial, suffering, and bereavement, but so many manifestations of the life of the Lord Jesus? Thus was it exemplified in the case of the apostles. "We are troubled on every side," says Paul, "yet not distressed; we are perplexed, but not in despair; persecuted, but not forsaken; cast down, but not destroyed. Always bearing about in the body the dying of the Lord Jesus, that the life also of Jesus might be made manifest in our mortal flesh." In another place, alluding to their sufferings, the apostle says, "I think that God has set forth us the apostles last, as it were appointed unto death: for we are made a spectacle (margin, we are made a theater) unto the world, and to angels, and to men." Theirs was no smooth and flowery, but a rugged and a thorny, way to God. They passed through the baptism of fire to glory. They fought their way to their thrones through the martyr's tribulations. But what to them were ignominy and suffering? What to them were the malice and the fury of their persecutors, hemming them in on every side, and confronting them at every step? What to them were the torture, which stretched the limb and tore the nerve- the famine, which wasted the body's strength, and dimmed the eye's luster- the imprisonment, which wore away the elasticity of the spirit- and the death of long and lingering agony, which wrenched the soul from its framework of flesh? They shrunk not, they murmured not, they fled not, for Christ was living in them. Why should they be depressed, or why yield to despair? They knew their Lord was risen, that He was alive, and was at the right hand of God, upon the throne. They knew that their life was bound up with His. They felt that Jesus was pouring forth each moment from the ocean-fulness of His own risen life, perpetual streams of existence into theirs; and that if, on the one hand, they were troubled, yet, on the other, they were not in distress; if perplexed, they yielded not to despair; if persecuted, they felt they were not forsaken; if cast down, they knew they were not destroyed; because they were conscious that, while bearing about in their bodies the dying of the Lord Jesus, the life also of Jesus was manifest in those bodies.