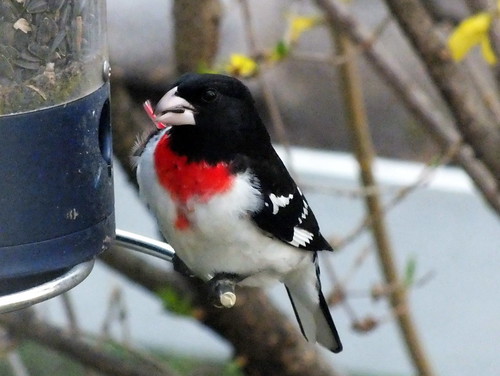 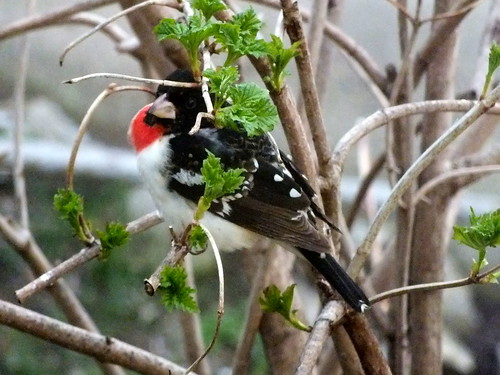 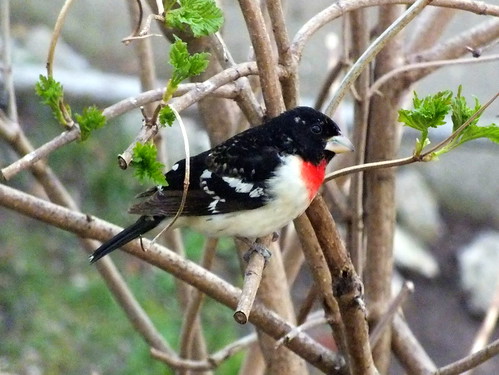 It is 10:14 AM Thursday morning in the flow of salvation history. Outside it is hazy but not bad. It is suppose to get in the 80's today. This warm weather should cause everything to bloom. When Tulip Time is over all the flowers should be out in full blaze of color. Tulip Time is over this coming Sunday. Right now it is too hectic traffic wise to go anywhere in town. There are crowds of tourist everywhere.

So the morning goes by normal. Carol has come home from work and gone to bed for the day. I am alone once again with my Self. Well I am not alone since I am in communion and union with the Godhead. I remember these words of the apostle Paul, "I have been crucified with Christ; it is no longer I who live, but Christ lives in me; and the life which I now live in the flesh I live by faith in the Son of God, who loved me and gave Himself for me." Galatians 2:20. I also confess this verse in Galatians, "But God forbid that I should boast except in the cross of our Lord Jesus Christ, by whom the world has been crucified to me and I to the world. For in Christ Jesus neither circumcision nor uncircumcision avails anything, but a new creation." Galatians 6:14,15.

I got up this morning around 6:48 AM. I drank coffee that I made last night for Carol (Carol always drinks coffee when she gets up in the evening.). I messed with our main computer this morning and then wrote in my paper diary.

I got out these books to read this morning-

"A Theology Of Luke And Acts: God's Promised Program, Realized For All Nations" by Darrell Bock

Well I think I will close to drift. I might go visit a thrift store this morning.

It is 2:24 PM Thursday afternoon. I did leave the house this morning to do errands and to visit thrift stores. I found these used books today to add to our library.

"In Dreams Begin Responsibilities And Other Stories" by Delmore Schwartz

"Delmore Schwartz: The Life Of An American Poet" biography by James Atlas

"Touched with Fire: Manic-Depressive Illness And The Artistic Temperament" by Kay Redfield Jamsison

"The Falls" a novel by Joyce Carol Oates

"Spider" a novel by Patrick McGrath (I have in our library another novel by McGrath titled, "Port Mungo".)

"Freddy And Fredericka" a novel by Mark Helprin

I could write more but I am out of gas. I was really excited to find these two used books today, "In Dreams Begin Responsibilities And Other Stories" by Delmore Schwartz and "Delmore Schwartz: The Life Of An American Poet" biography by James Atlas. I recently read James Atlas's biography on the life of the American writer Saul Bellows.

While out doing errands I spotted a hawk in a tree and took a picture before he flew off. 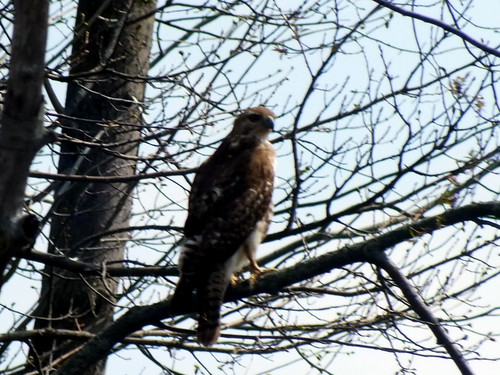 April 2014
"Fire in the Streets: America In The 1960's" by Milton Viorst
"Blue Calhoun" a novel by Reynolds Price
"The Earth Shall Weep: A History Of Native Americans" by James Wilson
"The Collected Stories of Elizabeth Bowen" With an introduction by Angus Wilson
"The Sot-Weed Factor" a novel by John Barth
"Sputnik Sweetheart" a novel by Haruki Murakami
"Vanessa Bell" a biography by Frances Spalding
"Paul the Missionary: Realities, Strategies and Methods" by Eckhard J. Schnabel
"The Heresy Of Orthodoxy: How Contemporary Culture Fascination with Diversity Has Reshaped Our Understanding of Early Christianity" by Andreas J. Kostenberger & Michael J. Kruger
"This Is My Beloved Son: The Transfiguration Of Christ" by Andreas Andreopoulos
"The Acts Of The Apostle" [The Pillar New Testament Commentary] by David G. Peterson
"Paul the Convert: The Apostolate and Apostasy of Saul the Pharisee" by Alan F. Segal
"Handbook on the New Testament Use of the Old Testament: Exegesis And Interpretation" by G. K. Beale
"Constructing Jesus: Memory, Imagination, and History" by Dale G. Allison Jr.
"Acts: An Exegetical Commentary 3:1-14:28" Volume 2 by Craig S. Keener
"Burning The Days" memoir by James Salter
"Berlin Diaries 1940-1945" by Marie Vassiltchikov
"Prisoners of the Good Fight: The Spanish Civil War 1936-1939: Americans Against Franco Fascism" by Carl Geiser
"Alias Grace" a novel by Margaret Atwood
"Runaway" stories by Alice Munro
"How It All Began" a novel by Penelope Lively
"The Ice Storm" a novel by Rick Moody
"Almost" a novel by Elizabeth Benedict
"Henry Moore: My Ideas, Inspiration And Life As An Artist" by Henry Moore & John Hedgrcoe
"Middlesex" a novel by Jeffrey Eugenides
"Flight Behavior" a novel by Barbara Kingsolver
"The Spirit Catches You And You Fall Down" A Hmong Child, Her American Doctors, And The Collision Of Two Cultures" by Anne Fadiman
"A Patchwork Planet" a novel by Anne Tyler
"The Midwife: A Memoir Of Birth, Joy, And Hard Times" by Jennifer Worth
"The Conquest Of Mexico And the Conquest Of Peru" by William H. Prescott
"The Sisters: The Saga of the Mitford Family" biography by Mary S. Lovell
"Our Man in Havana" a novel by Graham Greene
"Plain Speaking: An Oral Biography Of Harry S. Truman" by Merle Miller
"Balkan Ghosts: A Journey Through History" by Robert D. Kaplan
"The Laments" a novel by George Hagen
"Merton: A Biography" by Monica Furlong
"Anna Karenina" a novel by Leo Tolstoy
"Oh The Glory Of It All" a memoir by Sean Wilsey
"Wild: From Lost To Found On The Pacific Crest Trail" memoir by Cheryl Strayed
"An American Childhood" memoir by Annie Dillard
"The Lovely Bones" a novel by Alice Sebold
"Horse Heaven" a novel by Jane Smiley
"Nature Diary" Janet Marsh
"Vargas Llosa For President" by Mario Vargas Llosa [Granta 36] A Paperback Magazine Of New Writing
"The Wooden Shepherdess" a novel by Richard Hughes
"The Song Before It Is Sung" a novel by Justin Cartwright
"Death Of A Harvard Man" by Simon Schama [Granta 34 A Paperback Magazine Of New Writing]
"Ambition: Paul Auster, Doris Lessing, Joyce Carol Oates, George Steiner, J. M. Coetzee introducing John Biguenet [Granta 58 The Magazine Of New Writing]
"Stay Here With Me" A Memoir by Robert Olmstead
"The Radleys" a novel by Matt Haig
"Nightingales: The Extraordinary Upbringing and Curious Life of Miss Florence Nightingale" biography by Gillian Gill
"The Commissariat Of Enlightenment" a novel by Ken Kalfus
"The Ayn Rand Reader" Edited By Gary Hull & Leonard Peikoff
"Gorky: A Biography" by Henri Troyat [Translated From The French By Lowell Bair]
"The Provincial Lady in London" a novel by E. M. Delafield
"Diary of a Provincial Lady" novel by E. M. Delafield
"The Provincial Lady in America" novel by E. M. Delafield
"The Provincial Lady in Russia" novel by E. M. Delafield
"The Children" novel by Edith Wharton
"The Reef" a novel by Edith Wharton
"Twilight Sleep" novel by Edith Wharton
"Of Love and Other Demons" novel by Gabriel Garcia Marquez
"Collected Stories" by Gabriel Garcia Marquez
"The Eleventh Man" a novel by Ivan Doig
"The Selected Letters of Anton Chekhov"
"Pigeon English" novel by Stephen Kelman
"Prague Pictures: Portrait of a City" by John Banville
"Against The Day" a novel by Thomas Pynchon
"Gravity's Rainbow" a novel by Thomas Pynchon
"Bluebeard" novel by Kurt Vonnegut
"Galapagos" a novel by Kurt Vonnegut
"Bagombo Snuff Box" Uncollected Short Fiction with an Introduction by Kurt Vonnegut
"A Solder Of The Great War" a novel by Mark Helprin
"Moby-Dick or The Whale" novel by Herman Melville
"Buddenbrooks" a novel by Thomas Mann
"Falling Off the Map: Some Lonely Places of the World" travel memoir by Pico Iyer
"Don Fernado Or Variations On Some Spanish Themes" by W. Somerset Maugham
"Everyone Loves You When You're Dead" music interviews by Neil Strauss
"The House Of The Spirits" a novel by Isabel Allende
"Refiner's Fire" a novel by Mark Helprin
"Genius: A Mosaic Of One Hundred Exemplary Creative Minds" literary criticism by Harold Bloom
"Family And Friends" novel by Anita Brookner
"Crome Yellow" a novel by Aldous Huxley
"The Colossus Of Maroussi" by Henry Miller
"Conversation: A History Of A Declining Art" by Stephen Miller
"Short Night of the Shadow Catcher: The Epic Life and Immortal Photographs of Edward Curtis" by Timothy Egan
"Le Grand Meaulnes, The Wanderer" by Alain-Fournier
"Pilgrim" a novel by Timothy Findley
"The Image or What Happened to the American Dream" by Daniel J. Boorstin
Collapse