It is 10:14 AM Thursday late morning here by Lake Michigan. It is snowing up in the Michigan peninsula. I can hear down here our furnace blasting away. Spring still has not come here for us this year.

I got up this morning around 7 o'clock AM. I made a pot of coffee when I got up. Next I messed with our main computer and then I wrote in my paper diary. Carol got up around 8 o'clock AM. I cooked us breakfast and after we ate I cleaned the kitchen and did chores around the house.

My friend Tim called this morning and he wants to get together for coffee after his AA meeting this afternoon.

There is not much else to report this morning. Last night I wandered the house and went to bed around Midnight. Now it is another day. Existence keeps on decaying.

This morning I read "Acts: An Exegetical Commentary Introduction And 1:1-2:47" Volume 1 by Craig S. Keener. Last night I read "The Acts Of The Apostle" [The Pillar New Testament Commentary] by Davids G. Peterson.

Well I will close to drift. I might go outside in our backyard and rake up dead plant growth. There is no way of escape.

It is 4:44 PM Thursday late afternoon. The day has gone by normal. Tim showed up here around 1 o'clock PM. We invited Tim to have lunch with us. So Tim and I did not go anywhere for coffee today, instead we stayed here and talked for three hours. Tim is basically the only person I really talk to beside my wife and our son Josiah.

In talking to Tim about Eastern Orthodox spirituality I showed him a book I recently bought titled, "This Is My Beloved Son: The Transfiguration Of Christ" by Andreas Andreopoulos. After Tim left to go grocery shopping with his daughter I wrote in my paper diary and then got out to read some more the book "The Is My Beloved Son". I found this interesting in this book on the transfiguration of Christ.

"The third part of the revelation of the Godhead in the Transfiguration of Christ is the revelation of the Father through the Son. As in the case of his Baptism. Christ's filial relationship with the Father is revealed by the words of the Father himself, which were almost identical to the words that were heard in the Jordan River at the Baptism of Christ. But this time more is revealed. The humanity of Christ and his Incarnation were proclaimed by the archangel Gabriel to Mary and were manifested at his birth, but on Mount Thabor Christ's divinity is also somehow made visible in front of witnesses. The inapproachable Father reveals his divinity through his Son and in this way imparts any part of the Godhead that can actually be seen, even if it results in an extraordinarily intense brightness that the eyes of Peter, John, and James cannot fully process and see.

The presence of Moses and Elijah demonstrates Christ's divinity very clearly. Of all the righteous figures of the past, of all the prophets of the Hebrew tradition, these two were singled out and brought to the mountain of the Transfiguration. Why these two and only these two? It is perhaps not hard to see the prominence of Moses, the man who essentially founded the Jewish nation and the Jewish state, but one could say that the honor of the second person of the Old Testament to brought back from the dead might fall on Abraham, David, or Solomon-or maybe on all of them. Why these two?

Moses and Elijah have something in common. According to Scripture, both of them requested to see God and had that request denied. It is true that the Old Testament is not very clear about things that have to do with the vision of God. The dialogue between God and Moses in Exodus 33:18-23 is fairly well known. In this passage Moses asked God to allow him to see him in his glory, to which God replies, "no man shall see me, and live." What we read here sounds unequivocal, although several other passages in the Old Testament, even passages in the book of Exodus, give a different kind of testimony that implies it is perfectly possible to see God. For instance, there are the seventy elders who saw, ate, and drank with God (Exod. 24:9-11), or Hagar, who marvels at being alive after she has seen God (Gen. 16:7-16), or Jacob, who exclaims, "I have seen God face to face" (Gen. 32:30).

Nevertheless, the reluctance of God to reveal himself completely "in his glory" to Moses and to Elijah suggests that these two did not just ask to receive some sort of visual sign given to them by God, but a complete visual revelation of the Godhead, something that was not possible at that time. Yet their presence on the mountain of the Transfiguration may be understood precisely as the fulfillment of their desire to see God. They had asked to see the God of the Old Testament, and yet it is Christ they came to see face to face. Far from a confusion between the person of the Father and the person of the Son in the manner that the early church condemned along with its proponent Sabellius (the priest who promoted the view that the same entity could be see through the "masks" of the Father in the Old Testament, the Son in the New Testament, and the Holy Spirit in the church), the fulfillment of the vision of Moses and Elijah during the Transfiguration was that they were allowed to see the divine light of the Father shine through the Son. Although they were faced with the second person of the Trinity, they could finally see the same divinity that they had desired and requested to see when they addressed the first person of the Trinity." pp.90-92
"This Is My Beloved Son: The Transfiguration Of Christ" by Andreas Andreopoulos

"[27] But I tell you of a truth, there be some standing here, which shall not taste of death, till they see the kingdom of God.
[28] And it came to pass about an eight days after these sayings, he took Peter and John and James, and went up into a mountain to pray.
[29] And as he prayed, the fashion of his countenance was altered, and his raiment was white and glistering.
[30] And, behold, there talked with him two men, which were Moses and Elias:
[31] Who appeared in glory, and spake of his decease which he should accomplish at Jerusalem.
[32] But Peter and they that were with him were heavy with sleep: and when they were awake, they saw his glory, and the two men that stood with him.
[33] And it came to pass, as they departed from him, Peter said unto Jesus, Master, it is good for us to be here: and let us make three tabernacles; one for thee, and one for Moses, and one for Elias: not knowing what he said.
[34] While he thus spake, there came a cloud, and overshadowed them: and they feared as they entered into the cloud.
[35] And there came a voice out of the cloud, saying, This is my beloved Son: hear him.
[36] And when the voice was past, Jesus was found alone. And they kept it close, and told no man in those days any of those things which they had seen." Luke 9:27-36 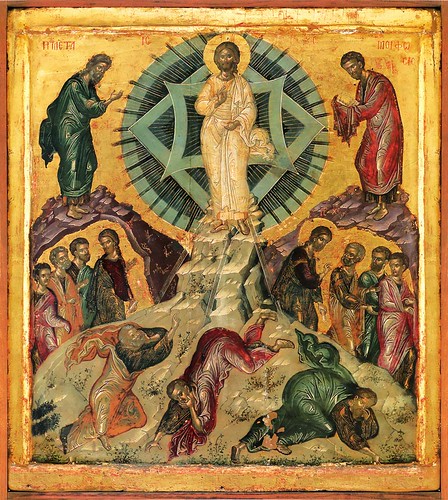