It is 10:07 AM Sunday morning in the flow of redemptive history. God is saving the world. Remember these words of the Apostle John, "For God did not send His Son into the world to condemn the world, but that the world through Him might be saved" John 3:17.

My wife just left for Covenant PCA. I thought about going down in the lower level and laying down in the dark. I feel wasted this morning. I am sure I would feel better if I took a brisk walk every morning. Yesterday I was thinking I have surrendered to old age.

Last night I watched some television, messed with our main computer and went to bed and read till late into the night these books.

"This Is My Beloved Son: The Transfiguration Of Christ" by Andreas Andreopoulos

"A Sunlit Absence: Silence, Awareness, and Contemplation" by Martin Laird

"The Final Days Of Jesus" by Andreas J. Kostenberger

Well I do not know what else to report. I will close to do my little dance of death.

For ever we would gaze on Thee,
O Lord, upon the Mount;
With Moses and Elias see
That light from light’s own fount;

For ever with the chosen three
Would stand upon that height,
And in that blessèd company
Be plunged in pure delight.

For ever would we train the ear
To that celestial Voice;
In Thee, the Son of God, so near
For evermore rejoice.

Here would we pitch our constant tent,
For ever here abide;
And dwell in peace and full content,
Dear Master, at Thy side.

But no! not yet to man ’tis given
To rest upon that height;
’Tis but a passing glimpse of Heav’n;
We must descend and fight.

Beneath the mount is toil and pain;
O Christ, Thy strength impart;
Till we, transfigured, too, shall reign
For ever where Thou art.

"[27] But I tell you of a truth, there be some standing here, which shall not taste of death, till they see the kingdom of God.
[28] And it came to pass about an eight days after these sayings, he took Peter and John and James, and went up into a mountain to pray.
[29] And as he prayed, the fashion of his countenance was altered, and his raiment was white and glistering.
[30] And, behold, there talked with him two men, which were Moses and Elias:
[31] Who appeared in glory, and spake of his decease which he should accomplish at Jerusalem.
[32] But Peter and they that were with him were heavy with sleep: and when they were awake, they saw his glory, and the two men that stood with him.
[33] And it came to pass, as they departed from him, Peter said unto Jesus, Master, it is good for us to be here: and let us make three tabernacles; one for thee, and one for Moses, and one for Elias: not knowing what he said.
[34] While he thus spake, there came a cloud, and overshadowed them: and they feared as they entered into the cloud.
[35] And there came a voice out of the cloud, saying, This is my beloved Son: hear him.
[36] And when the voice was past, Jesus was found alone. And they kept it close, and told no man in those days any of those things which they had seen." Luke 9:27-36

I take my naps down here in the lower level of our home surrounded by some of our books. 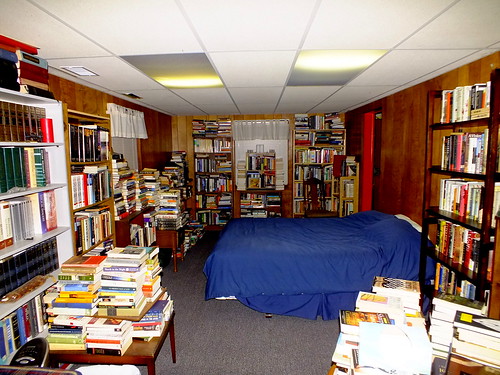 Carol and I took a walk this afternoon at Outdoor Discovery Nature Center. You can hear the sound of frogs in the video. On our walk we hardly saw any birds or Spring flowers.

It is 5:20 PM Sunday evening. I am down in the lower level reading from a book titled, "The Art of Prayer: An Orthodox Anthology" compiled by Igumen Chariton Valamo. I keep this book on my night stand to read before going to sleep. I also have another copy of this book by my old lap top computer.

I came down here also to take my daily hot shower. Carol will be leaving soon for Covenant PCA. I am tired so I am sure I will go to bed early tonight.

Well I will close with this quote from the book "The Art of Prayer".

Prayer has various degrees. At first it is only the prayer of the spoken word, but with this must go prayer of the mind and heart, warming it and maintaining it. Later, the mind-in-heart prayer gains its independence: becoming sometimes active, stimulated by one's own efforts, and sometimes self-moving, bestowed as a gift. Prayer as a gift is the same as inward attraction towards God, and develops from it. Later on, when the state of the soul under the influence of this attraction becomes constant, mind-in-heart prayer will be active unceasingly. All earlier temporary attractions now become transformed into states of contemplation; and it is at this point that contemplative prayer begins. The state of contemplation is a captivity of the mind and of the entire vision by a spiritual object so overpowering that all outward things are forgotten, and wholly absent from the consciousness. The mind and consciousness become so completely immersed in the object contemplated that it is as though we no longer possess them" pg. 64 Theophan the Recluse
Collapse