Here are some pictures of massive commentaries in my library. Joseph Caryl and John Owen were 17th century English Puritans. The two volume commentary on the Gospel of Luke is by a contemporary biblical scholar Darrell Bock. I just found out Bock has a commentary on Acts which I plan to get the next time I am in Grand Rapids. Luke wrote both The Gospel of Luke and Acts, which are really one book Luke-Acts. 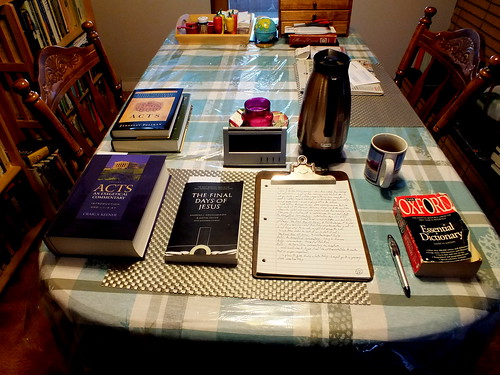 Exposition On Job by Joseph Caryl 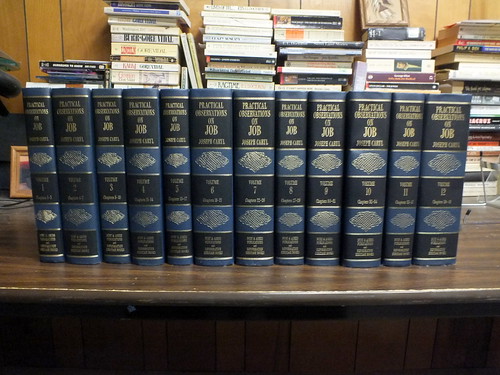 Exposition on the Epistle to the Hebrews by John Owen 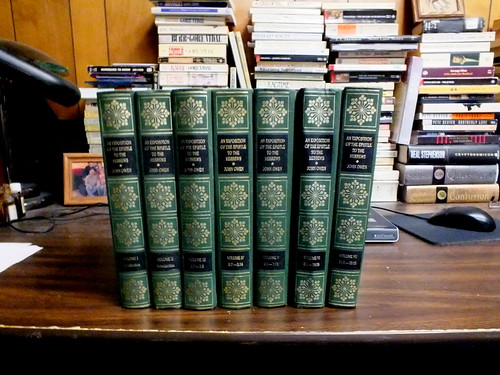 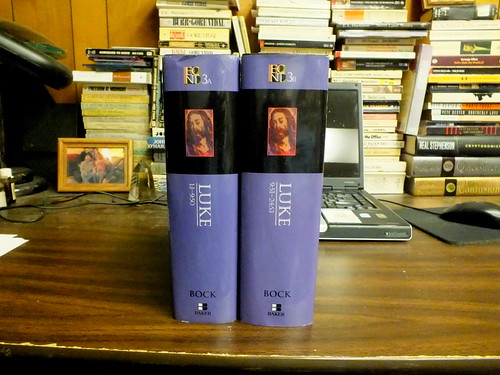 "[1] Forasmuch as many have taken in hand to set forth in order a declaration of those things which are most surely believed among us,
[2] Even as they delivered them unto us, which from the beginning were eyewitnesses, and ministers of the word;
[3] It seemed good to me also, having had perfect understanding of all things from the very first, to write unto thee in order, most excellent Theophilus,
[4] That thou mightest know the certainty of those things, wherein thou hast been instructed." Luke 1:1-4

"[1] The former treatise have I made, O Theophilus, of all that Jesus began both to do and teach,
[2] Until the day in which he was taken up, after that he through the Holy Ghost had given commandments unto the apostles whom he had chosen:
[3] To whom also he shewed himself alive after his passion by many infallible proofs, being seen of them forty days, and speaking of the things pertaining to the kingdom of God:
[4] And, being assembled together with them, commanded them that they should not depart from Jerusalem, but wait for the promise of the Father, which, saith he, ye have heard of me.
[5] For John truly baptized with water; but ye shall be baptized with the Holy Ghost not many days hence." Acts 1:1-5

I got up this morning around 6:50 AM. I was having a dream on French Modernism when I woke myself up. I made a pot of coffee and then messed with our main computer. Carol had a message on our telephone answering machine telling me she had made it Phoenix, it was 12:30 AM our time when she called. I went to bed last night around 10:30 PM and read till I got sleepy one of my new books titled, "The Final Days Of Jesus".

Carol called this morning around 10:05 AM our time. She said she had taken care of baby Mae during the night. Mae is one week old.

I went out this morning to do errands and to visit thrift stores. I found three used books to ADD to our Book Collection.

"The Year Of The Barricades: A Journey Through 1968" by David Caute

"The Last Days of Old Beijing: Life in the Vanishing Backstreets of a City Transformed" by Michael Meyer

Not much else to report. I am still seeking to adjust to not having my wife around. Last night I read my new commentary on Acts by Keener. I have been reading Keener's commentary on Acts off and on today. Well I will close to drift through the rest of the day.

It is now in the flow 4:03 PM Friday late afternoon. I have been reading this afternoon when not looking out windows a volume titled, "Acts: An Exegetical Commentary" Volume 1 Introduction And 1:1-2:47 by Craig S. Keener. I have near me these volumes by Craig S. Keener.

"The IVP Bible Background Commentary: New Testament" by Craig S. Keener "An indispensable resource for all students of the Bible, accessibly providing the cultural background of every verse in the New Testament"

"A Commentary On The Gospel Of Matthew" by Craig S. Keener

"The Gospel Of John" A Commentary" Two Volumes by Craig S. Keener

I am a student of God's Word the Holy Bible. Christians are all students of God's Word. When I was attending churches I assumed the Ruling Elders and Teaching Elders knew more than me and had larger libraries. I always told people in the churches we attended "I am just a poor layman." Back when I was going to church I worked hauling eggs off farm trucks. My calling in life back then was being a poor farm worker. Now if a poor farm hand has books like the above then a rich middle class minister should also have more books then me so as to bring out the riches of God's Word in his teaching and preaching ministry.

I am nothing special in the kingdom of grace. I have not gone to church in seven years. I stopped going to church because no one talked to me and no one knew what I was talking about. I got tired of feeling like a freak among God's people. Maybe when I am super old I will hobble back to a visible church. Don't I need a minister to administer to me the last rites before I go to heaven. Who is going to give my funeral sermon when I lay in a plain pine box dead but alive in God? Some times I think I should write down my last words so as to be read before my loved ones put me to rest in the ground.

This afternoon besides reading my books on the Acts of the Apostles I fried three hamburgers for future meals. When my wife is away I usually eat hotdogs, hamburgers and sandwiches. Carol told me to go out for dinner some evenings and also to go out for breakfast while she is away. I am not into food. I eat like a baby chick.

Well I will close to take my hot shower and sit in silence till the dawn of the age of Aquarius.

"the evangelist Luther knows that by proclaiming the Word of God, he is accelerating the satanic rape and enslavement of the world" quoted from the book "The Reformation: Roots and Ramifications" by Heiko A. Oberman

(I am not denying I went to Reformed Bible College and Reformed Theological Seminary. I do have a Master of Divinity degree and have been a student of the Bible for 44 years. Some Ruling Elders only have a limited education and can not match my knowledge of divine realities. What is important in the end is to love Jesus and His Word.) 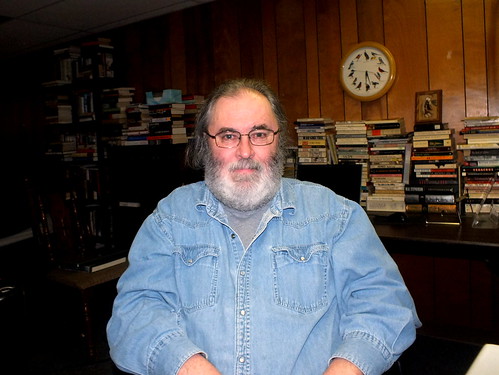 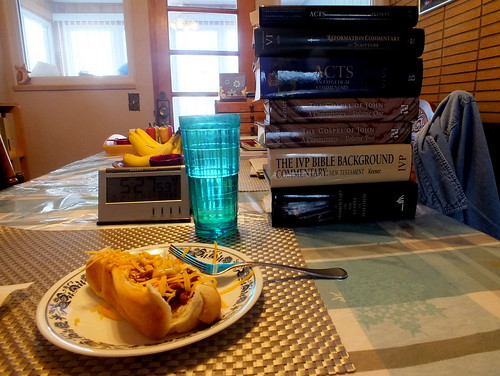 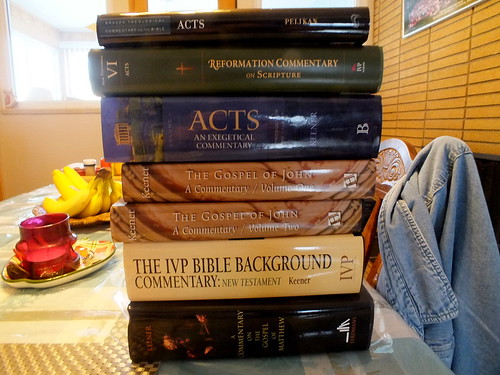 It is 8:20 PM Friday night. I have been sitting in the dark in living room listening to music. I like to go to bed, but it is too early. I did not take a nap today. Hopefully I will sleep good tonight.

I called Carol at 6 o'clock PM there in Arizona. She had a quiet day with Beth and baby Mae. I told Carol what I did today. I have had a simple day. Tomorrow morning I volunteer at the Herrick Library used bookstore from 10 AM till 1 PM.

I have mentioned in my recent entries my love for God's Word the Bible and how I have studied many years the Bible. When I was going to church people did not have an appreciation for my knowledge of the Bible. What I found in churches was anti-intellectualism. Now I am not saying I am super smart. I know very little, but I do know some things about the Bible (the teachings of the Bible). When I was teaching Adult Sunday School there were elders who also taught who had very little knowledge of the Bible or Reformed Theology. These elders had more authority than me when it came to determining what the Bible taught on certain doctrines. Christians in these churches looked upon my two academic degrees with disdain. It meant nothing to them that I had gone to Bible College and Seminary. It did not mean anything to them that I had read extensively in Theology, the Bible and Church History etc. . . These professing Christians just saw me as some weird religious freak.

People who are not Christians see no value in knowing the teachings of the Bible. When it comes right down to it no ones wants to study the Bible with me it seems. I am thankful I have a godly Christian wife who lets me share my thoughts about what God the Holy Spirit has taught me over these 44 years walking with the Lord God.

Well, I will close to wait to go to bed.

"[1] In the beginning was the Word, and the Word was with God, and the Word was God.
[2] The same was in the beginning with God.
[3] All things were made by him; and without him was not any thing made that was made.
[4] In him was life; and the life was the light of men.
[5] And the light shineth in darkness; and the darkness comprehended it not.
[6] There was a man sent from God, whose name was John.
[7] The same came for a witness, to bear witness of the Light, that all men through him might believe.
[8] He was not that Light, but was sent to bear witness of that Light.
[9] That was the true Light, which lighteth every man that cometh into the world.
[10] He was in the world, and the world was made by him, and the world knew him not.
[11] He came unto his own, and his own received him not.
[12] But as many as received him, to them gave he power to become the sons of God, even to them that believe on his name:
[13] Which were born, not of blood, nor of the will of the flesh, nor of the will of man, but of God.
[14] And the Word was made flesh, and dwelt among us, (and we beheld his glory, the glory as of the only begotten of the Father,) full of grace and truth." John 1:1-14