It is 10:33 AM Monday morning in the flow of ice. It is once again snowing outside and the roads are dangerous to drive on. In 38 days it will be the first day of Spring March 20, 2014. Around here it does not really become Spring like till late May. All one can do is be patient and in time Spring will come once again.

I got up this morning around 7:26 AM. I got up made a pot of coffee and had breakfast. I next messed with our main computer and then wrote in my paper diary.

Carol called me around 8:50 AM to be picked up. When we got home I fed the birds and Carol went to bed around 9:30 AM. I have done nothing this morning. I feel absolutely frozen this morning. I do not want to do anything but sit.

I cover for someone at the library book nook from 2 PM till 4 PM this afternoon.

Well I do not know what else to report this morning. I feel absolutely terrible. I believe this hard winter weather has really gotten to me lately.

I have on my main study desk these books to read if I can be set free from these chains of depression.

"Welcome To Hard Times" a novel by E. L. Doctorow

"Pages From A Cold Island" memoir by Frederick Exley

"Max Perkins Editor of Genius" a biography by A. Scott Berg

"My Life In Middlemarch" memoir by Rebecca Mead

"The Trip To Echo Springs: On Writers And Drinking" biography by Olivia Laing

"The Collected Writings of St. John of the Cross"

"[Explains this purgation thoroughly by means of a comparison.]

1. For the sake of further clarity in this matter, we ought to note that this purgative and loving knowledge, or divine light we are speaking of, has the same effect on a soul that fire has on a log of wood. The soul is purged and prepared for union with the divine light just as the wood is prepared for transformation into the fire. Fire, when applied to wood, first dehumidifies it, dispelling all moisture and making it give off any water it contains. Then it gradually turns the wood black, makes it dark and ugly, and even causes it to emit a bad odor. By drying out the wood, the fire brings to light and expels all those ugly and dark accidents that are contrary to fire. Finally, by heating and enkindling it from without, the fire transforms the wood into itself and makes it as beautiful as it is itself. Once transformed, the wood no longer has any activity or passivity of its own, except for its weight and its quantity that is denser than the fire. It possesses the properties and performs the actions of fire: It is dry and it dries; it is hot and it gives off heat; it is brilliant and it illumines; it is also much lighter in weight than before. It is the fire that produces all these properties in the wood.[1]

2. Similarly, we should philosophize about this divine, loving fire of contemplation. Before transforming the soul, it purges it of all contrary qualities. It produces blackness and darkness and brings to the fore the soul's ugliness; thus one seems worse than before and unsightly and abominable. This divine purge stirs up all the foul and vicious humors of which the soul was never before aware; never did it realize there was so much evil in itself, since these humors were so deeply rooted. And now that they may be expelled and annihilated they are brought to light and seen clearly through the illumination of this dark light of divine contemplation. Although the soul is no worse than before, either in itself or in its relationship with God, it feels clearly that it is so bad as to be not only unworthy that God see it but deserving of his abhorrence. In fact, it feels that God now does abhor it. This comparison illustrates many of the things we have been saying and will say.

Soon the lamp post in our front yard will be buried to the top with snow. 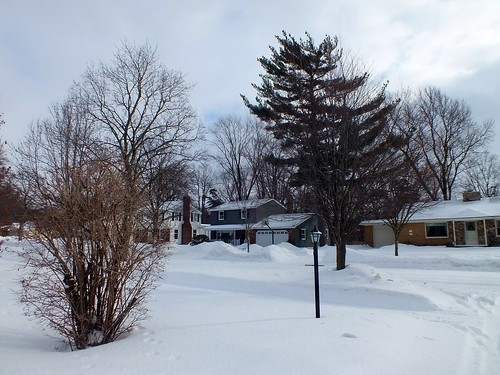 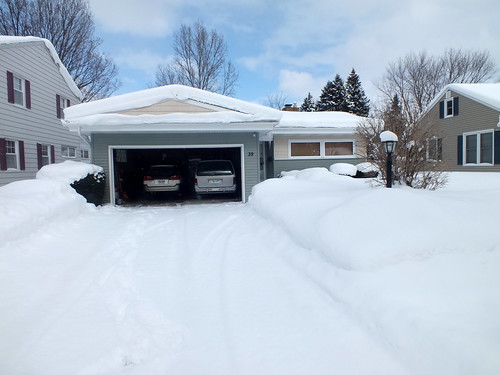