It is 10:07 AM Tuesday morning in the Flow. We are still experiencing a winter storm here by Lake Michigan. It is 3 degrees this morning. A good day to experience frost bite.

I got up this morning around 8 o'clock AM. I did not get to bed till sometime past Midnight. I stayed up late to watch college football.

Not much going on this morning. Carol has gone to bed for the day. I am still feeling out of it mentally. I might just sit in silence all day. Existence will speed by.

I read last night mainly a book titled, "The Trip To Echo Spring: On Writers And Drinking" by Olivia Laing.

Well I suppose I will close to watch birds and sit. There is no where to go and there is nothing super important to do.

I got out to read this morning a treatise by the 17th century English Puritan Richard Baxter (1615-1691) titled "The Divine Life" found in Volume 3 "Baxter's Practical Works" "The Saint's Everlasting Rest". Richard Baxter is one of my favorite Puritan writers. In reading Baxter I can sit and contemplate what I have read/what I am reading. One can easily say reading the writings of Baxter is like entering into a contemplate state.

Richard Baxter wrote one of the most massive treatise on Heaven titled, "The Saint's Everlasting Rest" which is found in volume 3 of "Baxter's Practical Works". People fail to realize there is an everlasting rest for the people of God.

I first read Baxter back in the early 1970's his treatise "An Alarm to the Unconverted" found in volume 2 "Baxter's Practical Works". This treatise by Baxter has been published many times over the centuries in book form.

Also Richard Baxter's treatise "The Reformed Pastor" is famous among those who have sought the church office of Pastor.

I do have in my library a massive one volume paperback titled, "The Practical Works of Richard Baxter: Selected Treatises" published in 1981 by Baker Book House.

Years ago I bought a used four volume set of "The Practical Works of Richard Baxter" but decided to traded the set in for "The Works of George Swinnock" 5 Volumes. George Swinnock (1627-1673) was another famous Puritan divine. I was so glad years later to get this new set of "Baxter's Practical Works" for our library. Everyone should have "Baxter's Practical Works" in their library especially as we come towards the end of the American Empire. Richard Baxter wrote his practical treatises to help his church flock grow in Christian holiness.

Well I will close to drift and read Richard Baxter. Check out this book sometime "Meet the Puritans With A Guide To Modern Reprints" by Joel R. Beeke & Randall J. Pederson. 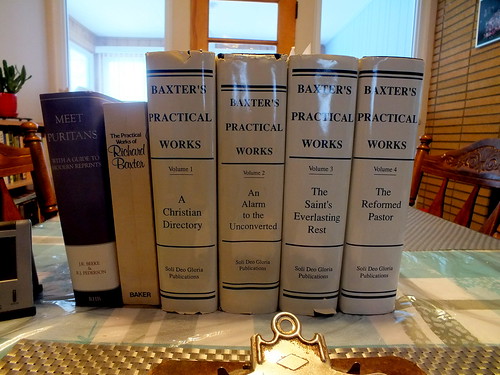